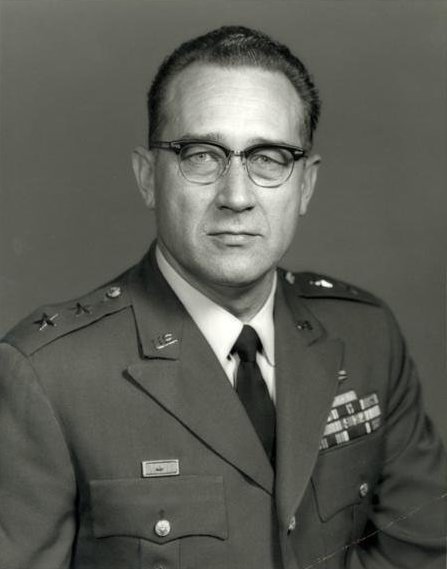 Maj. Gen. Keith L. Ware was born in Denver on November 23, 1915. His military career began on July 9, 1941, when he undertook his basic training at Camp Roberts, California, following his induction into the Army under the Selective Service Act. He attended Officer Candidate School at Fort Benning, Georgia, and was commissioned a Second Lieutenant of Infantry on July 18, 1942.

Assigned to the 3rd Infantry Division, he sailed on October 22, 1942, from Hampton Roads, Virginia, and was part of the North African invasion force. He participated in the Algeria-French Morocco and Tunisian Campaigns. The next major operations he participated in were the invasion of Sicily, the Naples-Foggia battles of southern Italy, the landings at Anzio Beachhead, and then on the San Tropez beaches of southern France August of 1944.

On June 18, 1945, he was awarded the Medal of Honor. An excerpt from the citation states, “On December 26, 1944, while serving as battalion commander of 1st Battalion, 15th Infantry, near Sigolsheim, France, he went forward to the front line elements of his command and for two hours reconnoitered a strongly held enemy position. He then led a small patrol forward and destroyed or captured four machine-gun positions and killed numerous enemy riflemen. Half of the patrol, including himself, were wounded, but he refused medical attention until his men captured the position.”

As an interesting side note, Audie Murphy received his Medal of Honor for actions in January 1945 as a member of Ware’s battalion. Later, he served as one of Ware’s company commanders.
After serving six months in Germany’s occupation forces, Ware returned to attend the Command and General Staff College at Fort Leavenworth and then was assigned to the Military District of Washington. This is where he met his future wife, Joyce, and married five months later, on May 3, 1947.

Ware was then assigned to West Point to teach Military Psychology and Leadership, then attended the Armed Forces Staff College and was assigned to serve in Korea from March 1955 until June of 1957.

It was then off to the National War College, back to Washington D.C. to serve as a Congressional Liaison, and then a Europe tour. During his next assignment as Assistant Division Commander of the 2d Armored Division (“Hell on Wheels”) at Fort Hood, Texas, he was promoted to brigadier general. His next duty was as Deputy Chief and Chief of Information for the Department of the Army from September 1964 through November 1967. During that tour, he was promoted to Major General on July 1, 1966.

Originally due for assignment to Germany, Ware appealed to the Secretary of the Army and was reassigned to Vietnam, where he initially served in major command assignments until taking over as commander of the 1st Infantry Division (“Big Red One”).

On September 13, 1968, during the Battle of Lộc Ninh, elements of the 1st Infantry Division were preparing to attack Hill 222, 6 km north of the town. Ware’s command group was flying in his command and control helicopter to view the battle when heavy anti-aircraft fire brought the helicopter down 5 km south of Lộc Ninh. Ware, his three command staff, and the four helicopter crew were all killed in the crash, including his dog. On October 25, 1968, Ware was posthumously awarded the Distinguished Service Cross.

His funeral was held, and he was laid to rest in Arlington National Cemetery. President Johnson, whom Ware had known from his legislative liaison days, attended.

His wife, who resides in Colorado, said that “he loved his country dearly and was a man of very high morals, very dedicated and a wonderful human being.”

The Army continues to recognize Maj. Gen. Keith L. Ware and his accomplishments to this day. The Army’s annual Awards for Journalism are named after him, as are the Parade Ground and an Elementary School at Fort Riley, Kansas (traditional home of the “Big Red One”); a range facility at Fort Benning, Georgia (home of the Infantry”); a Simulation Center at Rock Island Arsenal, Illinois; and, of course, an etching on panel 44W of the Vietnam War Memorial.

His Medal of Honor is currently on display at the National Infantry Museum at Fort Benning.