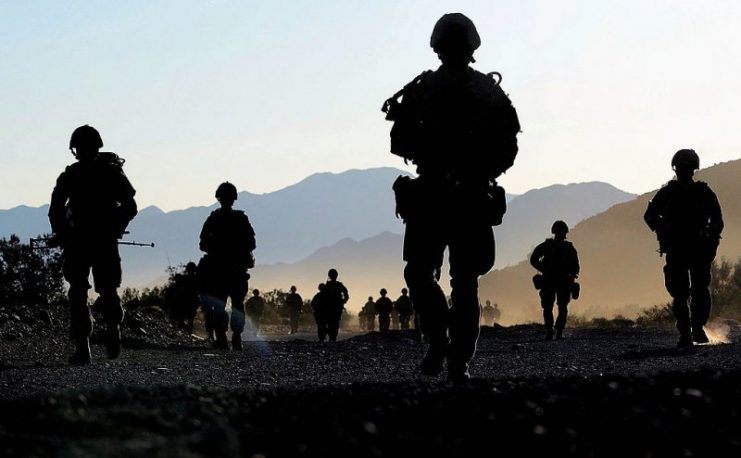 These regular armies recognized a further need in more modern times: to move away from Armed Forces made up of conscripts to a truly professional volunteer force that was highly trained and motivated.

Nowadays, the Armed Forces in 108 countries are made up purely of volunteers, and another four countries intend to follow suit and do away with conscription soon.

Countries that already have a volunteer Armed Forces know that constant training is of paramount importance to ensure their soldiers are ready for any eventuality. Consequently, they need to set aside sizeable land, sea, and airspace areas and provide substantial resources to create large scale training areas.

Take, for example, the British Army’s Lulworth Ranges in Dorset, England. Established in 1917, it covers around 7,000 acres and is used for AFV (Armored Fighting Vehicle) Gunnery practice.

The Army also has access to Salisbury Plain, where a 150 square mile training area can create a highly realistic combat environment.

Furthermore, military exercises offer the opportunity for realism and cooperation on a massive scale, like the annual “Joint Warrior” exercise. This is a British Tri-Service multinational exercise that involves air, land, and sea units. It is the largest military exercise in Europe and prides itself on creating a complex, relevant, and realistic set of challenges.

The 2019 exercise will be based on Scotland’s coast and will involve 35 warships, five submarines, and 59 aircraft and helicopters. Over 10,000 military personnel from NATO and the UK’s closest allies will be involved, and the exercise will last for two weeks.

But this level of intense training comes at a cost – not just in terms of time and finance. According to the UK Ministry of Defence, 143 UK Armed Forces deaths have occurred while on training or exercise between January 1, 2000, and August 31, 2018.

In comparison, the British Armed Forces lost 47 men during the Gulf War that ran from 1990 to 1991 (Operation Desert Storm). It would seem that the correct type of ongoing training must be as deadly as war itself.

It all comes back to that adage of having to train hard to fight easy.

The Americans go a step further in terms of both scale and realism with such military exercises as its Red Flag exercises, which have been held since 1975 by the USAF (the United States Air Force).

These are two-week-long advanced aerial combat training exercises that are held several times a year. Their purpose is to provide realistic air-combat training to military pilots and their crews. These exercises are held in Nevada and Alaska.

Each year, it is reckoned over 500 aircraft are involved in the Red Flag exercises and carry out around an average of 40 sorties each. Such maneuvers offer valuable experience to thousands of aircrews and ground support personnel.

On top of this, both the US Air Force and Navy use Aggressor Squadrons of US aircraft camouflaged to look and trained to act like enemy aircraft. These are used to improve US aircraft air-to-air proficiency skills and teach ACM (Air Combat Maneuvering) to a higher level. Currently, such aircraft as the F-16N is used to represent the Russian MiG-29 Fulcrum.

But what about on the ground? Some US Army units like the 4th Squadron, 2nd Armored Cavalry Regiment based in Southern Germany have improvised and created local training schemes using converted M113 Armored personnel carriers been turned into mock Russian tanks.

These are classed as “VISMODs” (Visually modified vehicles). Despite adding a turret, a fake gun barrel, non-standard camouflage, and body molding, the end result may not look like any NATO MBT (Main Battle Tank), but nor does it look like the T-72B3 Russian tank. In fact, the vehicle ends up looking more like an Australian M113A1 Fire Support Vehicle of the 1970s.

The VISMOD M113 uses an improved Hoffman training device for added realism. This device is located above its fake gun and is designed to replicate both the sound and smoke plume of a tank gun firing. The Hoffman device resembles a typical tank multiple grenade launcher.

This system has not been without controversy, as there was a common problem with the canisters prematurely detonating for no apparent reason. The new, improved system used on the VISMOD M113 appears to have largely cured this issue.

At the National Training Centre (NTC) at Fort Irwin, California, back in the United States, they carry out much larger scale exercises using VISMODs. They even incorporate aerial VISMODs units such as UH-1 Hueys helicopters converted to look like Russian Mil Mi-8.

For a long time, M551 Sheridan light tanks represent Soviet armored opposition forces (OPFOR). They were modified to resemble Russian-made T-72 and T-80 tanks. Unlike the VISMOD M113, they bore an uncanny resemblance to the vehicles they were meant to portray.

Less successful was when they were used to portray Russian BMP-1 infantry fighting vehicles. The fundamental problem was that the Sheridan was a tank with a crew of four, whereas the BMP-1 was designed to carry eight passengers and a three-person crew – something the Sheridan simply could not do.

As a result, you had the ludicrous situation of Sheridans converted to look like BMP-1s with American trucks following behind them carrying the infantry element that was meant to be inside the VISMOD Sheridans. This ruined the veneer of realism, which was the whole point of the exercise.

The NTC’s emphasis has changed over the years, moving away from the focus on training for large scale armored battles in the 1980s and 90s to concentrate more on urban warfare and counterinsurgency.

One feature of the NTC facility today is 12 mock “villages.” These villages are highly realistic, filled with all the appropriate buildings like hotels, government buildings, religious structures, and markets. The largest village consists of 585 buildings.

The training experience is further enhanced by the widespread use of UAS (simulated Unmanned Aircraft System), including Drones. MILES (multiple integrated laser engagement system) is used, which employs lasers and sensors to accurately replicate the firing characteristics and hit probability of any given main armament.

The NTC is complimented by the Joint Readiness Training Center (JRTC) at Fort Polk, Louisiana, which uses VISMODs to improve combat readiness. The JRTC focus is to put forward training scenarios of particular relevance to a given unit and offer exercises as mission rehearsals for forthcoming operations.

As we enter the second decade of the 21st Century, the American Armed Forces – despite budgetary challenges – continue to see the need for ongoing realistic and comprehensive training environments and regimes.

As the US General Colin Powell once said: “There are no secrets to success. It is the result of preparation, hard work, learning from failure.”