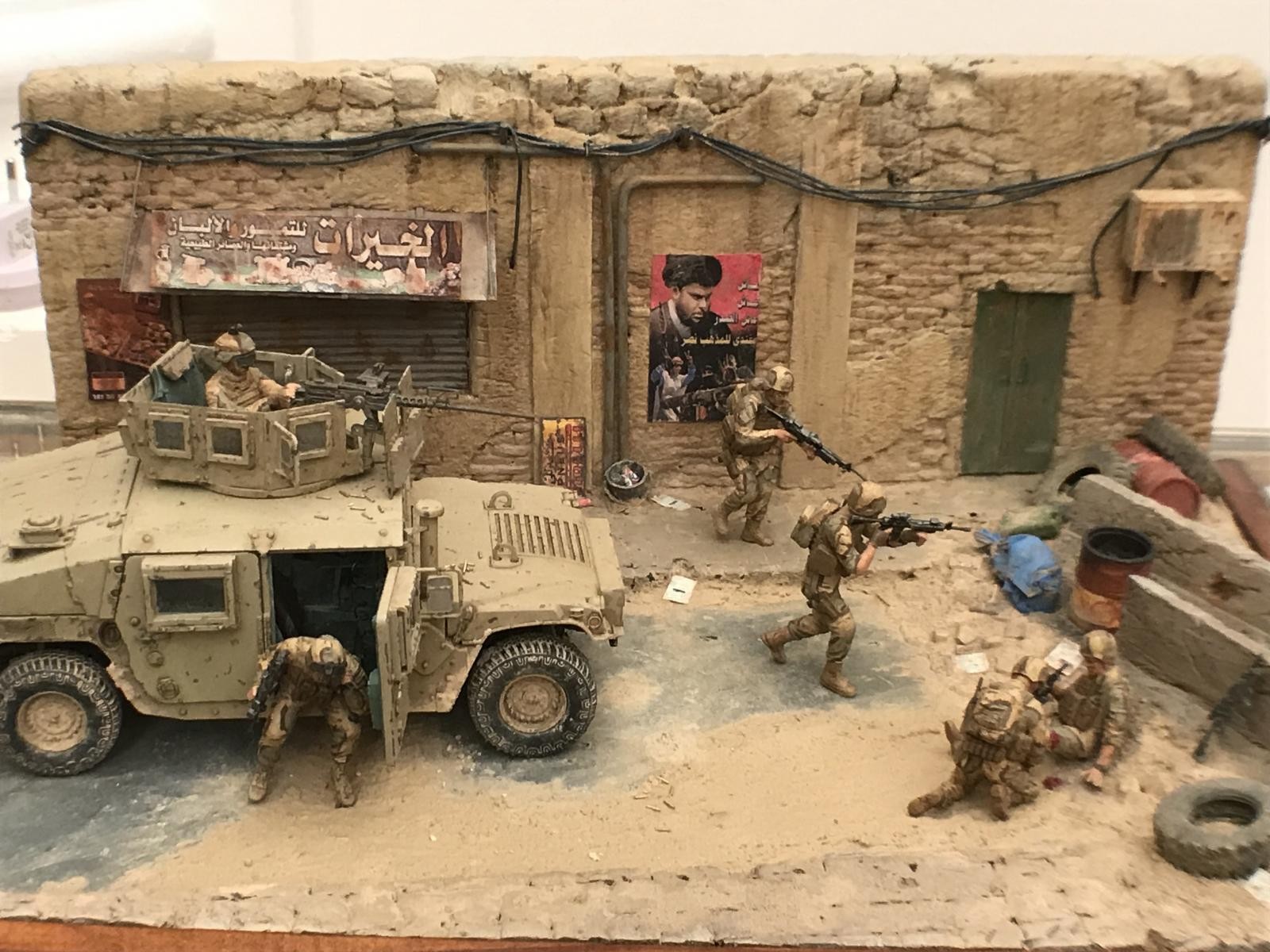 On Mar. 28, 2004, Paul Bremer, administrator of the American-led Coalition Provisional Authority of Iraq, ordered the closure of al-Hawza, an Arabic-language newspaper that was a sounding board for the Shia cleric Muqtada al-Sadr.

Bremer shut down the weekly paper because he believed it encouraged violence against U.S. troops in Iraq. It was only supposed to last 60 days, but the action would spark a series of events that led to a four-year siege and a series of battles between Coalition forces and al-Sadr’s Mahdi Army.

On April 3, 2004, Bremer ordered the arrest of Mustafa Yaqoubi, one of al-Sadr’s senior advisors. An estimated 15,000 Iraqis took to the streets to demand his release. Demonstrators claimed that Spanish and El Salvadoran troops opened fire on them as they gathered, and the protest took a violent turn.

In response, al-Sadr ordered his Shia militia, the Mahdi Army, to take control of the Iraqi police stations in Najaf, Kufa, and Karbala but especially in Baghdad’s Sadr City, a Shia-controlled Baghdad suburb known for its fervent support of the cleric.

Al-Sadr next called for a general uprising against the Coalition forces in Iraq. On April 4, the fighting began in earnest as the American 1st Cavalry, and local Iraqi police were driven out of the suburbs’ police stations in a surprise ambush, killing eight and wounding 51 others. It became known among American Soldiers as “Black Sunday.”

The U.S. forces were able to retake the police stations in heavy fighting, but the next month the Mahdi Army struck again. It massed more than 100 fighters to storm the police stations once more but were fought off by armored elements of the 1st Cavalry Division.

By June, the United States controlled the suburb, one of the poorest in Iraq, but in name only. The area’s inhabitants were still loyal to Muqtada al-Sadr.

The large mass of Iraqis living in the area provided the most protection for the cleric. The 2.5 million people living in the crowded, narrow streets of Sadr City made an all-out assault unappealing to U.S. and Coalition leaders. The likelihood of civilian casualties would be too much for a country already on the brink of civil war.

A Ceasefire Between the Mahdi Army and the Coalition Government

In August 2004, Grand Ayatollah Ali al-Sistani returned to Iraq from London, where he was receiving medical treatment. The ayatollah brokered a ceasefire between the Mahdi Army and the Coalition government, created demilitarized zones in sensitive Shia cities, and negotiated Iraqi Army troops’ use to guard cities instead of Coalition occupation forces.

The ceasefire held, but in the meantime, the Mahdi Army gathered its strength, expanding beyond Sadr City. It soon controlled much of Baghdad, placing up to 70% of the city under Muqtada al-Sadr’s control. By 2006, it was fighting a new enemy, the Sunni militia al-Qaeda in Iraq.

The sectarian fighting between various religious groups like the Mahdi Army, al-Qaeda in Iraq, and forces controlled by Iran were wreaking havoc on civilians, sectarian fighters, and Coalition troops alike. Improvised Explosive Devices (IEDs) began to take a toll on the U.S. military. The fighting was felt by the militias as well, with an estimated 250 bodies of sectarian fighters found in the streets every month.

By this time, four more brigades of American troops were deployed in and around Baghdad as part of the 2007 troop surge, with the “Baghdad Security Plan” as the cornerstone of the Surge. New concrete barriers separated areas of the city, and movement was restricted using security checkpoints. New foot patrols increased security in the city, and neighborhoods were swept out to clear out the insurgent activity.

Concrete became the most powerful weapon of the war, an important development as the Iraqis would discover later in the fight for Sadr City.

Retaking Baghdad required three key elements: clear, control, and contain. After clearing out militia fighters, the Coalition would maintain a presence on the streets of the neighborhoods to control the streets. Coalition forces would then rebuild police stations and reinforce that control with a constant presence. When the Iraqi Security Forces could handle the security, the Coalition forces would move on.

Meanwhile, U.S. forces were largely unaware of what was happening inside Sadr City. After a 2007 airstrike, the United States was not allowed in the area by order of Prime Minister Nouri al-Maliki. Al-Maliki declared the area off-limits to the Coalition.

Suddenly in March 2008, the Mahdi Army began striking Coalition targets in the International Zone, where the U.S. embassy was, on U.S. bases, and around Baghdad International Airport using rockets fired from Sadr City. On March 21-22, the militia also began to overrun Iraqi checkpoints in and around Sadr City – the Mahdi Army had launched a new offensive. On March 23rd, all hell broke loose.

Insurgent fighters overran Iraqi Security Forces, police stations, and Coalition-linked militias called “The Sons of Iraq.” By the 25th of March, Sadr City was completely controlled by the Sadrists, and half of the security checkpoints around it were controlled by the Mahdi Army.

Without lifting the restrictions on U.S. troops entering Sadr City, Prime Minister Nouri Al-Maliki requested the Coalition and Iraqi forces to stop the rocket attacks on Baghdad and arrest the criminal militias hiding out there.

American troops cut off rocket launching positions south of Route Gold, along the border of Sadr City, as the Iraqis moved to seize Ishbiliyah and Habibiyah neighborhoods. The Mahdi Army responded by attempting to overrun the Americans outside of Sadr City using mass numbers, but close-air support from Apache helicopters supporting ground troops leveled the odds in favor of the U.S.

The militias didn’t break and run at the first sign of U.S. troops, as expected. They were determined to keep their urban stronghold. Even when the U.S. brought Abrams tanks and other armored vehicles to bear, the Americans found a determined enemy waiting for them.

With the Mahdi Army pushed back into its Sadr City hideout, it was time for the U.S. to end the rocket attacks. Operation Striker Denial ran from March 26 to April 14, an attempt to cut out positions from which the Sadrist could fire rockets.

The Siege Of Sadr City and Operation Gold Wall

It quickly became clear that the United States had to prevent the movement of Mahdi Army fighters, material, ammunition, and supplies throughout that area of the city to stop the rocket attacks. To that end, the U.S. began to construct a 12-foot-high concrete wall isolating the two key neighborhoods from the rest of Sadr City. Operation Gold Wall was an effort to box in the fighters using the same kinds of walls that were effective in other areas of Baghdad.

Initially, the U.S. effort was hampered by huge numbers of well-hidden IEDs and other specialized shape charges that could puncture layers of steel armor. To expedite the removal of the explosives, M1 Abrams tanks would fire 120-millimeter canister rounds to set off any explosives ahead of the convoys building the wall. With the path forward clear, the wall construction continued at night, using American night vision technology as an advantage.

The militia’s tactics also began to evolve during this time in an effort to counter American efforts to build the wall. When the insurgent tactics shifted, so did the Americans’. When the Mahdi Army began using snipers to hit the cranes loading the concrete barriers, Army Special Forces snipers launched an intense countersniper campaign against them. When snipers couldn’t hit enemy snipers, they called in support from loitering drones.

The anti-rocket campaign also evolved. When the operation first began, enemy rocket launch teams were targeted as soon as they fired a rocket. Eventually, the intelligence, surveillance, and reconnaissance (ISR) teams began to watch the insurgents after firing and follow them back to where they received order and ammunition. That’s when the U.S. Air Force Predator drones and Army Shadow UAS would strike.

The insurgents realized that snipers and IEDs were not going to stop the Americans from building the wall. Their last effort was to come out shooting, giving up the one advantage they had over the U.S. in urban combat: hiding in the city. Once they attacked in mass, the U.S. Army could identify and engage them with superior firepower.

As the fighting dragged on, the militia began to lose fighters it couldn’t afford. An estimated 700 insurgents were killed in the fighting for Sadr City. Its military leadership fled Baghdad for other areas, including Iran and Syria.

On May 12, 2008, Muqtada al-Sadr declared a ceasefire, allowing the Iraqis to consolidate their gains in the area. In the area of Sadr City below the wall is where the lasting difference was made for the population of the neighborhood, according to a study from the RAND Corporation.

The Coalition and Iraqi government began enabling Iraqi small businesses in the rebuilding of the area, giving them a stake in its continued peace. By using only Iraqi forces in the neighborhood, the government also showed the city was not controlled by an occupation force to be resisted. Stability, security, and improvement made to the area allowed for the population to reject the control of the Mahdi Army and support the new Iraqi government.

By May 20, the 44th Brigade of the Iraqi Army entered Sadr City unopposed. Sadr City is one of the most densely populated areas where the United States has ever fought.