The Dogs of the Vietnam War 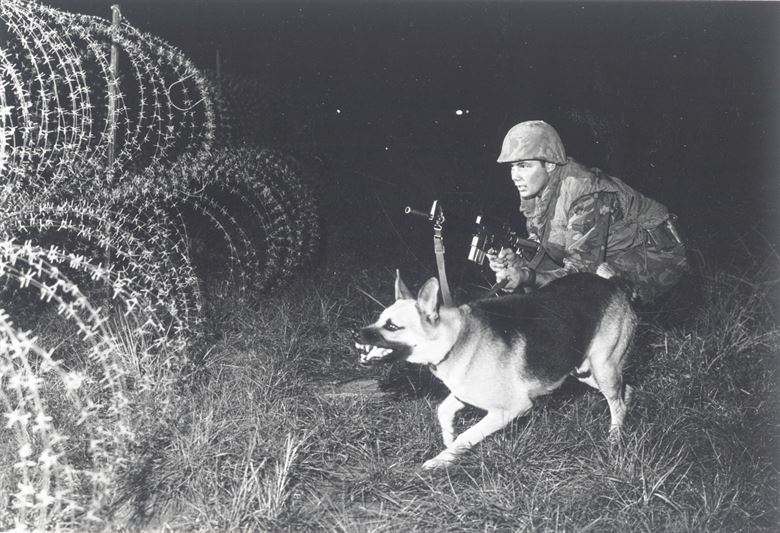 I would wager that 90 percent of American combat troops killed in action during the Vietnam War never saw their killers.

Whether it was a sniper at 200 yards, a rocket fired into a base camp or an attack from a well-concealed bunker complex, the element of surprise was usually on the side of our enemies. But our forces did have one elite weapon that sometimes took the advantage away. At times, these weapons even turned such situations upside down and enabled us to surprise and take them out.

That elite weapon was our military working dog, and we had thousands of them.

I was a sentry dog handler in Vietnam from 1967 to 1968, a member of the 212th Military Police Sentry Dog Company stationed in Tay Ninh. My companion was a German shepherd named Smokey. I was 20 years old and weighed 135 pounds; Smokey weighed 90 pounds. Our unit’s responsibility was to protect the Tay Ninh Base Camp, and especially the ammunition dump. Smokey and I typically worked at night, 6 p.m. to 6 a.m., but we would also conduct daylight area sweeps when temporarily attached to infantry units.

In Vietnam, American forces used dogs for everything from base security to detecting ambushes to hunting down fleeing enemy units. We used German shepherds like Smokey, mixes of shepherd types, and Labrador retrievers that were well trained in detecting, attacking, and tracking the enemy. They were certainly not all purebreds. Most were given to the military by families back home.

The dogs started out at Lackland Air Force Base in Texas with a thorough physical exam. Then they were observed and tested to determine which area of training they would be assigned. Aggressive dogs usually went to the sentry unit. Less aggressive but still highly intelligent shepherd dogs went to the scout school. The Labradors, with their amazing noses, went straight to tracker training. Every dog accepted was highly intelligent, and each became a canine soldier, with his or her own individual four-digit service number tattooed in the left ear.

Dogs and their handlers went through three phases of instruction: drill/obedience, aggression, and scouting. And although it appeared that the dogs were being instructed, it was the soldiers who were actually being taught. At Okinawa, where I met and trained with Smokey, most of the dogs were veterans being reassigned to new handlers. They knew the drills inside and out, and we did not. Our training instructors seemed to take a perverse pleasure in informing us how dumb we were compared with the dogs.

Every dog responded to both verbal and nonverbal hand commands. They loved to work purely for the approval and praise of their handler and partner. And throughout training that special bond was formed between trooper and dog. I know I felt it with Smokey.

Once in Vietnam, these dogs were the gold standard. Search-and-destroy missions used a handler and his scout dog to walk point, out in the jungle, able to raise an alarm about an ambush long before most of the unit was in danger. The dog’s handler could determine the distance to the danger, usually by the degree of his dog’s state of “alert.” Then, instead of walking into the Vietcong trap, he could call in fire or air support to obliterate the enemy position. Not every unit on patrol got a dog; there weren’t enough to go around, and in those cases, a Soldier would have to walk point alone. But with a scout dog team leading the way, most patrols were successful or uneventful.

A human nose has about five million scent receptors; a shepherd has at least 225 million. The dogs can detect movement much faster and more accurately than we can, and their ears can hear, even at a very early age, sound from four times farther away than we can. What’s more, all our dogs had lived with our American “smells” for years. The scent of the Vietnamese was very different and much easier for them to pick up and alert on.

This scent or sound alert was also true of the sentry dog teams, like Smokey and me. When a dog team arrived at its post – usually just a path around a camp, ammo dump, or airfield – it performed a “changeover.” The handler changed the dog’s choke-chain collar to his leather “now it’s time to work” collar. The dog understood the difference immediately and went to work.

There were also mine and booby trap dogs. They protected our soldiers on patrol from the many and diverse devices set to kill and maim. Take the thin, monofilament lines that were practically invisible to the human eye, which the Vietcong attached to a grenade or other explosive device that detonated when “tripped.” A large proportion of American infantry casualties were caused by these devastating devices. But a trained dog could detect the trap, and it would be neutralized.

Combat tracker teams consisted of five soldiers and two Labrador retrievers. Each team included a visual tracker and a dog handler upfront, followed by their cover man, then the radioman and the team leader. Expertly trained by New Zealand’s elite Special Air Service in Malaysia, their dogs were initially provided by the British military. These teams didn’t wait to be ambushed. They chased down the Vietcong and the North Vietnamese Army forces after a firefight when they would attempt to disappear back into the jungle.

Throughout the course of the war, 4,000 dogs served in Vietnam and Thailand. It was well known that the enemy put a bounty on both the handlers and their dogs. Approximately 350 dogs were killed in action, many more were wounded, and 263 handlers were killed.

When our politicians decided to exit Vietnam – in a hurry – the military classified our dogs as “equipment.” As such, they were left behind. Some, but not many, were transferred to the South Vietnamese military and police. Of the 4,000 dogs that served in-country, fewer than 200 made it back to the States. Not a pleasant thought to consider given their incredible service, endurance, and devotion to duty.

I’ve heard it said that without our military dogs, there would be 10,000 additional names on the Vietnam Veterans Memorial wall. I, for one, think that’s an understatement.

Richard Cunningham served as a sentry dog handler in Vietnam and later worked with the New York Police Department and as a fraud investigator.