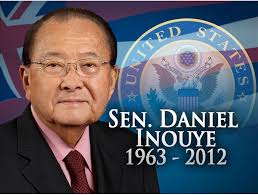 Senator Daniel Inouye served in the United States Senate from 1963 until his death in 2012. At the time of his death, he was America’s second-longest sitting Senator, which is not at all surprising considering he could easily be considered one of World War II’s hardest men to kill.

This Japanese-American, who faced discrimination and segregation, had every reason to sit this war out if he so chose with a bitter heart. But considering he was raised by a father who told him the following upon enlisting by his account: “My father just looked straight ahead, and I looked straight ahead, and then he cleared his throat and said, ‘America has been good to us. It has given me two jobs.

It has given you and your sisters and brothers education. We all love this country. Whatever you do, do not dishonor your country. Remember – never dishonor your family. And if you must give your life, do so with honor.”

Daniel Inouye was born in 1924 Honolulu Hawaii, which as a second-generation or Nisei Japanese American, would put him in quite an awkward spot as a young 17-year-old man when the Japanese bombed Pearl Harbor in 1941. And while as a patriotic young man, he served as a medical volunteer in that attack, he would find himself out of place in a nation suddenly consumed with national security.

On the mainland of America, thousands of Japanese Americans would find their way into internment camps. In contrast, in Hawaii, where the population was up to a quarter Japanese heritage, it was merely deemed unfeasible. Martial law and curfews were put into place while a ban on Japanese American enlistment was enacted.

As a result, Inouye chose to pursue a career in medicine by pursuing pre-med studies at the University of Hawaii. However, when the United States drop its ban on Japanese American enlistment in 1943, Inouye quickly enlisted in the Army and volunteered to be a part of the completely segregated all-Nisei 42nd Regimental Combat Team.

Made up primarily of second-generation Japanese, these men would get their chance to contribute to the war effort as they were shipped to Europe, and posterity would prove this to be one of the most decorated units of the war.

Inouye’s capabilities were quickly recognized as he was promoted to Sergeant within the first year. His unit participated in campaigns in Italy before being moved to France after the D-Day invasion. While in France, he was further promoted to Lieutenant and awarded the bronze star for his actions in combat.

He also picked up what would be a consistent streak of luck when he was shot in the chest by a bullet only to be saved by a pair of silver dollars he kept in his pocket. These lucky charms would remain with him until he lost them, and things subsequently got really interesting.

Just weeks before the end of World War II, Inouye found his unit fighting near San Terenzo in Tuscany, Italy, during April of 1945. Despite having realized that he, unfortunately, lost his lucky silver dollars, that wouldn’t stop a young Inouye from pressing the attack as if he had a guardian angel riding his shoulder the entire time.

They were attacking one of the last German strongholds in Italy against a backed-up yet determined German Army where Inouye would lead an assault on the heavily defended known as Colle Muscatello.

As the attack pressed on against heavy machine-gun fire, Inouye stood up and was struck in the stomach by a German bullet. While such a wound would send most men back to the medics, Inouye was no such man.

Pressing on as if it never happened, he continued to rake the German gun positions with Tommy Gunfire and grenades as he led his men on a ferocious charge. Such action would be enough gallantry for one day if Inouye were any other man, but he was decidedly anything but any other man.

Approaching another machine gun position, Inouye prepped a grenade and stood to throw it when he was struck in the elbow by a German grenade launcher. Despite the fact that the grenade nearly severed his entire right arm, Inouye looked down at his then useless arm, pried the live grenade out of his immobile hand, and threw it at the German position scoring a kill.

Then, beyond belief as if hearing the words of his father to honor both his family and country, he picked up a Tommy Gun with his left arm and continued the assault. It was only when he was struck again in the leg and lost consciousness from the loss of blood that his body finally relented.

Despite his horrific wounds, Daniel Inouye survived. His right arm would be amputated without anesthesia, and for his actions, he would be awarded nothing other than the Distinguished Service Cross. Despite his gallantry in combat, no Asian American would receive the Medal of Honor by the end of World War II.

As the territory of Hawaii went on to become a State, Inouye would go on to become a Senator for the State, who never lost an election in his public service career. In the year 2000, Inouye and his unit of the 442nd would finally get the honor due to their service as the nation realized their conspicuous gallantry had been overlooked. President Bill Clinton awarded Senator Daniel Inouye along with 20 other members of this relatively small unit, the Medal of Honor.

Their bravery in combat is beyond dispute by any historical standard as these men represented the best of America in World War II. And among them was this short future United States Senator that would prove hard to kill in the arena of combat or politics.