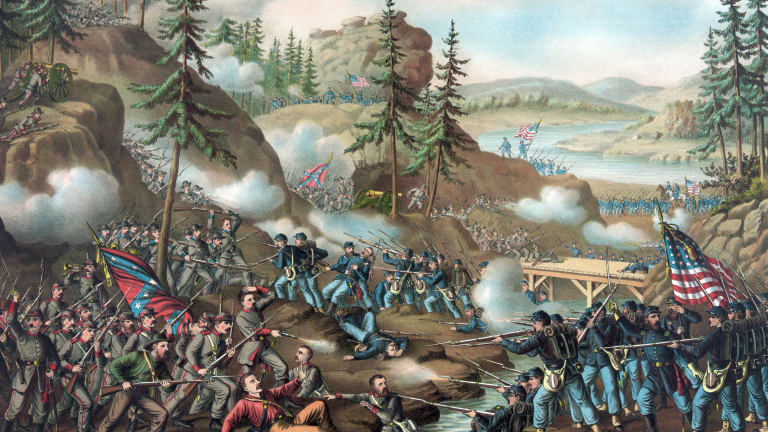 Chickamauga, a bloody Civil War battle, fought near the Chickamauga Creek in Georgia. The Battle of Chickamauga ended in a victory for Confederate forces and resulted in 34,000 casualties. It marked the end of a Union offensive in southeastern Tennessee and northwestern Georgia, known as the Chickamauga Campaign. It is widely considered to be the second deadliest battle of the Civil War, following the Battle of Gettysburg.

In the summer of 1863, Maj. Gen. William Rosecrans led his Union Army of the Cumberland from Murfreesboro, Tennessee, towards Chattanooga, 140 miles to the south. Chattanooga was an important rail junction for the South. The goal was to use the Federal army of about 60,000 to surround the city and cut off escape for Gen. Braxton Bragg and his Army of the Tennessee numbering about 40,000.

As the Union Army approached Chattanooga in early September, Bragg and his army abandoned the city and retreated to Chickamauga Creek, just 12 miles away. There they awaited reinforcements. More than 30,000 Confederate troops poured in, boosting morale. Now on the offensive, the Confederates set out on the morning of September 18, 1863, to cross two bridges on the Chickamauga Creek. They encountered Union infantry and cavalrymen armed with Spencer repeating rifles blocking the way. Skirmishes ensued, but Bragg’s army eventually made it across the creek.

As evening approached, the Confederates encountered Union troops north of Lee and Gordon’s Mills. Rosecrans huddled with George Thomas, a Union general, to strategize and hold open a path of retreat back to Chattanooga for Union forces. Thomas gathered troops and marched through the night to extend Union lines northward and guarantee safe passage. After marching all night, the weary and thirsty soldiers stopped to prepare breakfast near a farm owned by Elijah Kelly. Thomas soon learned that an isolated enemy force was nearby in the woods. He sent a division of his men eastward to contend with them. Fighting broke out in earnest and intensified as it spread across an area covering four miles.

The Battle of Chickamauga raged throughout September 19th. Confederate forces pounded away at the Union line but were not able to break it, leaving both sides exhausted. As night fell, temperatures dropped, and soldiers endured a night of freezing temperatures. The dead and wounded littered the fields, including Merritt J. Simonds of the 42nd Illinois, Company K. He lay wounded on the battlefield for nearly a week before being attended to.

On October 8th, he wrote his father a letter saying he had been severely wounded but was optimistic for recovery. He wrote a second letter on October 27th, saying, “My leg is now mortifying above the knee, and doctors say I cannot live more than two days at the longest. You must not take this to heart but look to a higher source for God’s comfort, for it is God’s will and I feel resigned to my fate, I would like to have my body taken home and buried beside my mother.” Simonds died shortly after, and his remains lie in Chattanooga National Cemetery.

On the morning of September 20th, Bragg planned a dawn attack against Union forces, but a breakdown in communication delayed the first engagement until 9:30 a.m. This allowed Federal soldiers time to organize and set up a defense. In the late morning, incorrect information was transmitted to Rosecrans, stating that a gap had developed in the Union line. While attempting to shore up the gap, he inadvertently moved units and created an actual gap. Confederates quickly exploited the weakness and surged through and pushed 1/3 of the Union army, including Rosecrans, off the field. Union soldiers began to retreat. Some of them, however, created a defensive line on Horseshoe Ridge near the farm of George Snodgrass. They held the ridge until evening allowing more Union soldiers to retreat, but the Confederates earned the victory.