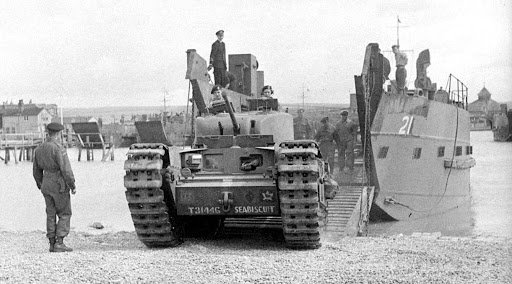 The Battle of Inchon was an amphibious invasion and battle of the Korean War that resulted in a decisive victory and strategic reversal in favor of the United Nations. The operation involved some 75,000 troops and 261 naval vessels and led to the recapture of the South Korean capital of Seoul two weeks later. The code name for the operation was Operation Chromite.

The battle began on September 15, 1950, and ended on September 19th. Through a surprise, amphibious assault far from the Pusan Perimeter that United Nations and South Korean forces were desperately defending, the largely undefended city of Incheon was being bombed by UN forces from the air and from the allied ships off the coast of Incheon.

On September 16th, in an attempt to stop the advance of the UN forces, North Korean People’s Army (NKPA) sent six columns of T-34 tanks to the beachhead. They were quite alone, without infantry support. They were spotted by a strike force of F4U Corsairs at the village of Kansong-ni, east of Inchon and two flights of F4U Corsairs from Marine Fighter Squadron 214 (VMF-214) bombed the attackers. The armored columns suffered extensive damage and the U.S. forces lost one airplane. A quick counter-attack by M26 Pershing tanks destroyed the remainder of the North Korean armored division and cleared the way for the capture of Incheon.

The battle ended a string of victories by the invading Korean People’s Army (KPA). The subsequent United Nations recapture of Seoul partially severed the NKPA’s supply lines in South Korea.

The United Nations and South Korean forces were commanded by General of the Army Douglas MacArthur who was the driving force behind the operation, overcoming the strong misgivings of more cautious generals to a risky assault over extremely unfavorable terrain.

Invasion of the Philippines:

On Dec. 8, 1941, just one day following the surprise attack on Pearl Harbor, the Japanese launched an attack on the United States and Filipino forces in the Philippines. The defending forces outnumbered the Japanese by 3 to 2, however, they were a mixed force of non-combat experienced regular, National Guard, constabulary and newly created Commonwealth units. The Japanese used first-line troops at the outset of the campaign and concentrating their forces enabled a swift overrun of most of Luzon during the first month. The outnumbered defenders withdrew into a defensive holding position in the Bataan Peninsula where they were able to hold for four more months.

The conquest of the Philippines by Japan is often considered the worst military defeat in United States history. About 23,000 American military personnel were killed or captured, while Filipino soldiers killed or captured totaled around 100,000

For the next three years, Allied forces retook each island held by the Japanese Imperial army and navy forces.  With these successes, Gen. Douglas MacArthur felt it was time to return to the Philippine Islands. On October 20, 1944, the U.S. Sixth Army-supported by naval and air bombardment-landed on the favorable eastern shore of Leyte, one of the islands of the Visayas island group, northeast of Mindanao.

Their second major target to attack was Mindoro. This large island is directly south of Luzon and Manila Bay, and MacArthur’s main goal in taking it was to be able to construct airfields on it for fighter planes that could dominate the sky over the most important island of Luzon, with its major seaport and the capital city of Manila.

Mindoro was only lightly occupied by the Japanese Army, and much of it was held by Filipino guerrillas, so Mindoro was quickly overrun. U.S. Army engineers set about rapidly constructing a major air base at San Fabian.

Mindoro was a major victory for the 6th Army, and it also provided the major base for the next move of MacArthur’s 6th Army: the invasion of Luzon, especially at Lingayen Gulf on its western coast which were invaded on January 9, 1945, when the first units were landed there.

Two more major landings followed one to cut off the Bataan Peninsula, and another, that included a parachute drop, south of Manila. Pincers closed on the city and, on February 3, 1945, elements of the U.S. 1st Cavalry Division pushed into the northern outskirts of Manila and the 8th Cavalry Regiment passed through the northern suburbs and into the city itself.

The Gallipoli Campaign (April-December, 1915) was the British and Allies’ attempt to capture the Dardanelles and eventually march on Istanbul, forcing the surrender of the Ottoman Empire and gaining control of the Black Sea beyond. It was the first time in modern history that a large-scale amphibious operation was ever attempted. However, it is widely viewed that this campaign was mismanaged and under-committed to from the start. The most successful operation of the campaign, in fact, was the evacuation.

Gallipoli is the long strip of land that runs across from the North-Western tip of the European side of Turkey. Both these sides of the Dardanelles were heavily defended by Ottoman forts and guns. It was Winston Churchill, First Lord of the Admiralty, who proposed the plan to take Istanbul. The initial attempt was a naval assault.

The British sent a force, comprised of many old and outdated warships, to take the straights, but to no avail. The next attempt was by land and so British (including Canadians and Indians), French, Australian, and New Zealand troops were shipped out to Gallipoli.

British ships bombarded the tip of the peninsula, pulverizing Ottoman forts, but losing the element of surprise. The Turkish and Arab troops shored up their defenses with high ground, trenches, machine guns and barbed wire set in the water.

The British and French landed at Cape Helles, the most Southern point, and the Australian and New Zealand Army Corps (Anzac) landed on what became known as Anzac Cove, a few miles to the North on the Aegean side of Gallipoli to cut of the Ottomans and meet the other divisions in the middle. But by the end of the day, the Allied forces had hardly made it off the beaches, and 5,000 troops were killed or wounded.

From that day onward, the campaign was a bloody stalemate. The last attempt to break this came in August. The Sari Bair Offensive, which was spearheaded from Anzac Cove, succeeded in pushing several miles inland before the Ottomans finally overcame the weary and few men were left after the haphazard assault.

The British and French would finally leave Cape Helles in early January 1916.

The full-scale evacuation of troops began on December 15th. This only happened by night, starting with supports and reserves, and then thinning out the trenches. By December 19th, 36,000 troops were evacuated out to sea, and only 10,000 remained.

That night, the remaining troops snuck off. On their way out, many set rifles and explosives on innovative timing devices and planted grenades and mines to both make the Ottomans think they were still there and to harass them with booby traps when they did finally come to inspect the abandoned trenches.

At 4:10 AM on December 20th, Anzac Cove and Sulva Bay were empty, without a single casualty. Though it is thought that the Ottomans were totally deceived by White’s plan, it is entirely possible that Mustafa Kemal, the Turkish General in Gallipoli, was willing to let the Allies slip away, as the campaign caused thousands of casualties among his troops.

By the end of the Gallipoli Campaign, the Allies had suffered well over 100,000 casualties; that number was roughly doubled for the Ottoman Empire.

The Battle of Okinawa was fought in the Pacific Theater between the Allies, spearheaded by the U.S. and forces from Japan. It was the second biggest amphibious battle from sea to land of World War II, after the Battle of Normandy. It was also one of the bloodiest battles in history. Fought from April to June 1945, the battle itself was made up of a string of skirmishes in the Ryukyu Islands, whose center was the island of Okinawa.

To those Japanese who thought the war was winnable, Okinawa was the last chance. The island lay within 350 miles – easy flight distance – from the Japanese homeland and was, by American design, to be the base from which the southernmost Home Island, Kyushu, would be pummeled to dust ahead of the expected follow-on invasion. Anything short of complete victory over Allied air, naval and ground forces spelled doom for Japan – and no such victory was remotely in the cards.

On April 1, 1945, the Allies launched a full amphibious assault on the islands with the aim to defeat the Japanese at Okinawa and to set up an airbase from which American planes could bomb the Japanese mainland. The landings, however, were made against zero opposition and with almost no casualties. Far from going into a state of optimism, however, the many veterans in the assault force realized that a very hard road lay before them, that the Japanese had chosen to dig deep and fight on their own terms.

The battle is one of the fiercest and bloodiest in the entire Pacific campaign due to the striking intensity of Japanese Kamikaze attacks and numerical strength of Allied warships, armored vehicles, and ground troops. For 80 days, reinforcements were landed on the Allied side who had effectively cut off all routes to the island for the Japanese, which was thus unable to reinforce or resupply their troops. The last remains of Japanese resistance ceased on June 21, 1945.

The Americans also lost 36 ships. 368 ships were also damaged. 763 aircraft were destroyed. The Japanese lost 16 ships sunk and over 4,000 aircraft were lost.

The Normandy landings were the landing operations on Tuesday, June 6, 1944, of the Allied invasion of Normandy in Operation Overlord during World War II. Codenamed Operation Neptune and often referred to as D-Day, it was the largest, most decisive Amphibious Assaults in modern history. The operation began the liberation of German-occupied northwestern Europe from Nazi control and laid the foundations of the Allied victory on the Western Front.

While the Battle of Okinawa involved more ground troops, landing on the beach-heads, Operation Overlord is often seen as more significant, having a greater impact in history that Okinawa.

The Allied forces consisted of a total of 156,000 men compared to almost 50,000 Germans with support from 170 coastal guns. Hitler – anticipating such an assault – ordered Field Marshall Erwin Rommel to take command of the German forces in 1943 and build the Atlantic Wall to thwart attempts by the Allies to retake France, Belgium, The Netherlands or Norway.

Hours before the landings began, a massive airborne assault targeting the German batteries and defenses on the shore was executed at midnight where thousands of airborne troops landed deep behind enemy lines.

The amphibious landings began at 0630 on target beaches that were divided into 5 sectors; Utah and Omaha for the Americans, Gold and Sword for the British and Juno for the Canadians. The men landing at Utah, Sword, and Gold faced slightly lighter resistance than expected, but on Juno and on Omaha the Germans made the Allies pay a heavy price for every inch they gained.

Nearly 160,000 troops crossed the English Channel on D-Day, with 875,000 men disembarking by the end of June. Allied casualties on the first day were at least 10,000, with 4,414 confirmed dead. The Germans lost 1,000 men. The Allied invasion plans had called for the capture of Carentan, St. Lo, Caen, and Bayeux on the first day, with all the beaches (other than Utah) linked with a front line 10 to 16 kilometers (6 to 10 mi) from the beaches; none of these objectives were achieved. The five bridgeheads were not connected until June 12th, by which time the Allies held a front around 60 miles and 15 miles deep. Caen, a major objective, was still in German hands at the end of D-Day and would not be completely captured until July 21st. The Germans had ordered French civilians other than those deemed essential to the war effort to leave potential combat zones in Normandy. Civilian casualties on D-Day and D+1 are estimated at 3,000 people.

This was the most decisive invasion during World War II, opening the way for a counter-offensive against the Nazi German occupation of Allied countries in Western Europe.