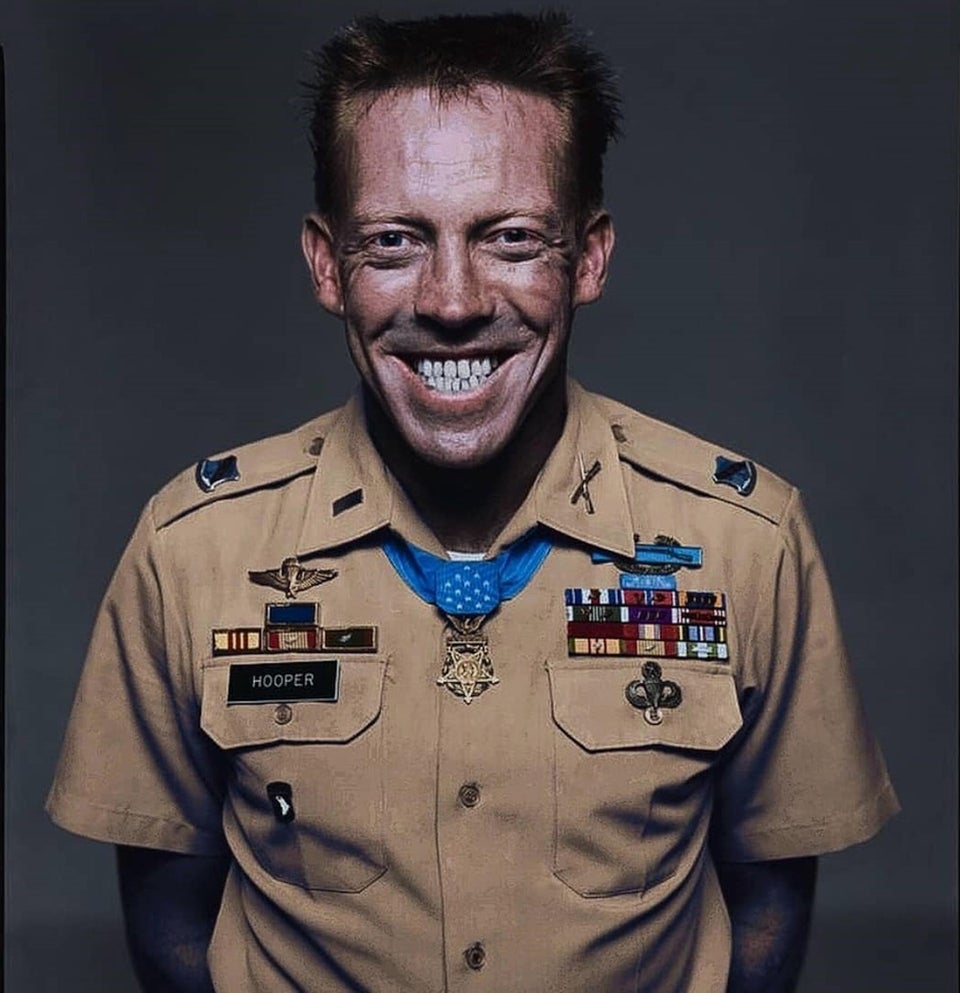 Joe Ronnie Hooper had his share non-judicial punishments (authorized by Article 15 of UCMJ), racked up 115 confirmed kills and was awarded the Medal of Honor. He was also one of the most decorated soldiers in American international combat.

Born in the summer of 1938 in South Carolina, Joe Ronnie Hooper was relocated as a child to Moses Lake, Washington where he attended Moses Lake High School.

Originally a Navy man, Hooper first enlisted in December of 1956. After graduation from boot camp at San Diego, California he served as an Airman aboard USS Wasp (CV-18) and USS Hancock (CV-19). He was honorably discharged in July 1959, shortly after being advanced to Petty Officer Third Class.

Joe Ronnie Hooper Enlisted in the US Army

The next year, Hooper enlisted in the US Army as a Private First Class. After graduating Basic Training, he volunteered for Airborne School. From there he did tours of duty in Fort Bragg, Korea, and Fort Hood, eventually making his way to Fort Campbell’s 101st Airborne Division.

Now a Staff Sergeant, Hooper requested a tour in Vietnam but was sent to Panama instead as a Platoon Sergeant. Unable to stay out of trouble while he was there, he was the subject of several Article 15 hearings and was eventually demoted to Corporal. However, he eventually got his Sergeant stripes back and deployed with the 101st to Vietnam in December of 1967, taking on the role of a Squad Leader. During his tour of duty with Delta Company (Delta Raiders), 2nd Battalion (Airborne), 501st Airborne Infantry, 101st Airborne Division, he was recommended for the Medal of Honor for his heroic actions on February 21, 1968, outside of the city of Hue.

On February 21st, 1968, Hooper and his company were beginning an assault on an enemy position when they came under fire by everything from machine guns to rockets.

According to his Medal of Honor citation, Hooper’s unit “was assaulting a heavily defended enemy position along a river bank when it encountered a withering hail of fire from rockets, machine guns, and automatic weapons. Staff Sergeant Hooper rallied several men and stormed across the river, overrunning several bunkers on the opposite shore.

Thus inspired, the rest of the company moved to the attack. With utter disregard for his own safety, he moved out under the intense fire again and pulled back the wounded, moving them to safety. During this act, Hooper was seriously wounded, but he refused medical aid and returned to his men. With the relentless enemy fire disrupting the attack, he single-handedly stormed 3 enemy bunkers, destroying them with a hand grenade and rifle fire, and shot 2 enemy soldiers who had attacked and wounded the Chaplain.

Leading his men forward in a sweep of the area, Hooper destroyed three buildings housing enemy riflemen. At this point, he was attacked by a North Vietnamese officer whom he fatally wounded with his bayonet. Finding his men under heavy fire from a house to the front, he proceeded alone to the building, killing its occupants with rifle fire and grenades. By now, his initial body wound had been compounded by grenade fragments, yet despite the multiple wounds and loss of blood, he continued to lead his men against the intense enemy fire.

As his squad reached the final line of enemy resistance, it received devastating fire from four bunkers in line on its left flank. Hooper gathered several hand grenades and raced down a small trench which ran the length of the bunker line, tossing grenades into each bunker as he passed by, killing all but two of the occupants.

With these positions destroyed, he concentrated on the last bunkers facing his men, destroying the first with an incendiary grenade and neutralizing two more by rifle fire. He then raced across an open field, still under enemy fire, to rescue a wounded man who was trapped in a trench. Upon reaching the man, he was faced by an armed enemy soldier whom he killed with a pistol. Moving his comrade to safety and returning to his men, he neutralized the final pocket of enemy resistance by fatally wounding three North Vietnamese officers with rifle fire. Hooper then established a final line and reorganized his men, not accepting (medical) treatment until this was accomplished and not consenting to evacuation until the following morning.”

While he was discharged from the Infantry upon his return from Vietnam in 1968, he managed to re-enlist and serve as a Public Affairs specialist until President Richard Nixon awarded him the Medal of Honor in 1969.

Hooper eventually managed to finagle his way back into the Infantry, serving a second tour in Vietnam as a pathfinder with the 101st Airborne. By 1970, he had been commissioned as a 2nd Lieutenant, though he was discharged from an active commission shortly after due to inadequate educational requirements.

Discharged and a little sour about it, Hooper managed to retain his commission in the Army Reserve’s 12th Special Forces Group before being transferred to a training unit. Though he was eventually promoted to Captain, he was discharged a final time in 1978 after a spotty drill record.

Much like the war he fought in, Hooper is not as well-known as other Medal of Honor recipients of his stature. According to accounts, he was a likable guy who partied hard, drank a lot and related to veterans. However, he was allegedly rather troubled by America’s treatment of soldiers and attitudes towards the war in general.

He is credited with 115 enemy killed in ground combat, 22 of which occurred on February 21, 1968. He became one of the most decorated soldiers in the Vietnam War and was one of three soldiers who were wounded in action eight times in the war.

In addition to the Medal of Honor, Hooper was also awarded two Silver Stars, 6 Bronze Stars with “V” Devices, an Air Medal, the Republic of Vietnam Gallantry Cross with Palm and 8 Purple Hearts.

He was found dead in a hotel room in Louisville, Kentucky on May 5, 1979, having suffered a cerebral hemorrhage in his sleep at the age of 40.

He is buried at Arlington National Cemetery, Arlington County, Virginia.

A book written by Peter Maslowsk is available on Amazon.com. It is titled “Looking for a Hero: Staff Sergeant Joe Ronnie Hooper and the Vietnam War” paperback.