Heroines of the Revolutionary War 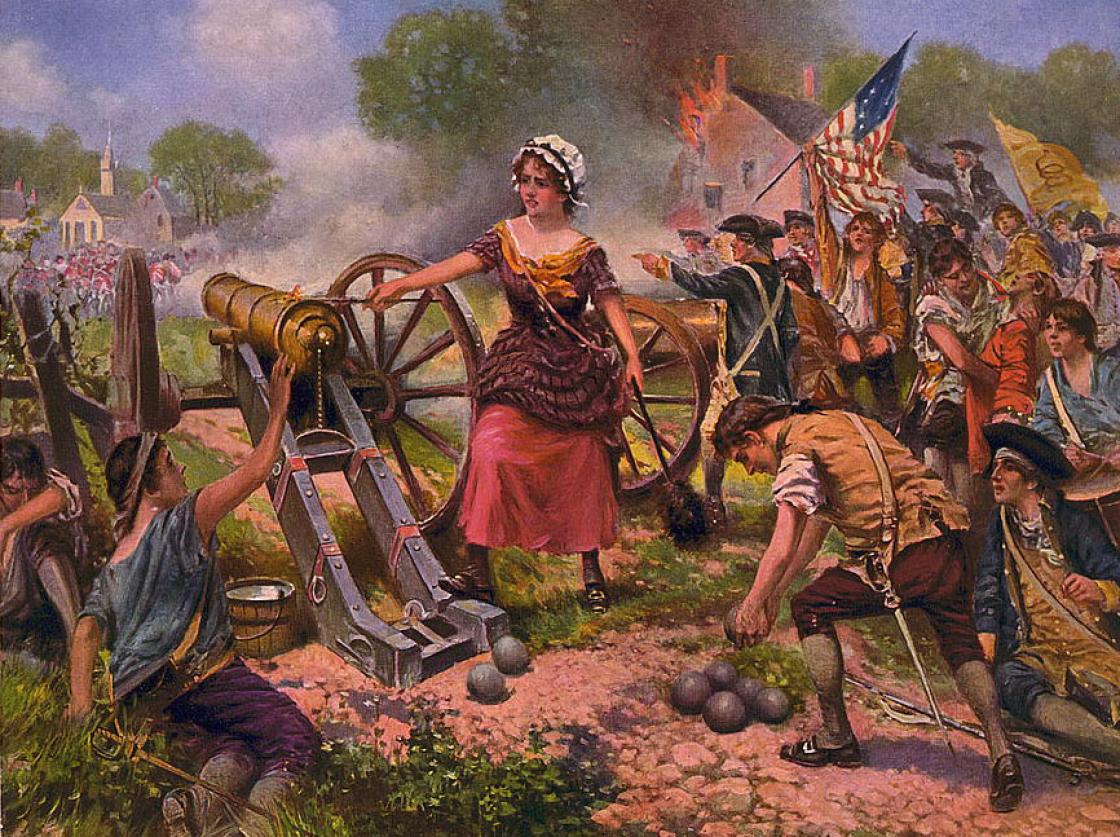 Since various “Molly Pitcher” tales grew in the telling, some historians regard Molly Pitcher as folklore rather than history. In contrast, others suggest it may be a composite image inspired by the actions of a number of real women who carried water to men on the battlefield during the war. However, historical records and eye witness accounts identify two women by name whose battlefield bravery marks them as genuine Molly Pitchers. They were Mary Ludwig Hays and Margaret Cochran Corbin.

Mary Ludwig, born in 1754, was the daughter of a New Jersey dairy farmer. At the age of 13, she went to work as a domestic servant, and that same year married a barber by the name of William Hays. When the Revolutionary War began, William enlisted in the Pennsylvania Artillery and became a gunner. Like hundreds of other wives of enlisted men, Mary followed her husband into battle and contributed actively by rendering such valuable services as laundering and nursing.

In early December 1777, as winter began to set in, General George Washington pulled his troops from White March – the site of the Continental Army’s last battle – to a more secure winter encampment at Valley Forge, Pennsylvania, approximately 20 miles northwest of Philadelphia. Likes thousands of others, Mary and William struggled through the bitter winter at Valley Forge, where starvation, disease, malnutrition, and exposure killed nearly 2,500 American soldiers by the end of February 1778. At the end of winter and the beginning of summer, Washington moved his forces to New Jersey on June 18, 1778, to begin a new offensive against the British.

Ten days later, at the New Jersey Battle of Monmouth on June 28, 1778, Mary Hays continuously moved around the battlefield bringing water to soldiers and artillerymen, often under heavy fire from British troops. Hours before the battle started, she found a spring to serve as her water supply. Two places on the battlefield are currently marked as the “Molly Pitcher Spring.”

The weather was hot, over 100 degrees Fahrenheit. Sometime during the battle, William Hays collapsed, either wounded or suffering from heat exhaustion. As her husband was carried off the battlefield, Mary Hays took his place at the cannon. For the rest of the day, in the heat of battle, Mary continued to “swab and load” the cannon using her husband’s ramrod. At one point, a British musket ball or cannonball flew between her legs and tore off the bottom of her skirt. Mary supposedly said something to the effect of, “Well, that could have been worse,” and went back to loading the cannon.

Joseph Plumb Martin recalls this incident in his memoirs, writing that at the Battle of Monmouth, “A woman whose husband belonged to the artillery and who was then attached to a piece in the engagement, attended with her husband at the piece the whole time. While in the act of reaching a cartridge and having one of her feet as far before the other as she could step, a cannon shot from the enemy passed directly between her legs without doing any other damage than carrying away all the lower part of her petticoat. Looking at it with apparent unconcern, she observed that it was lucky it did not pass a little higher, for, in that case, it might have carried away something else, and continued her occupation.”

The battle was seen as a major victory for the Continental Army.

After the battle, General Washington supposedly asked about the woman whom he had seen loading a cannon on the battlefield. In commemoration of her courage, he issued Mary Hays a warrant as a non-commissioned officer. Afterward, she was known as “Sergeant Molly,” a nickname that she used for the rest of her life.

At the close of the war, William and Mary Hays returned to Pennsylvania. They settled in Carlisle, where Mary went back to work as a domestic as well as a house cleaner, or “charwoman,” in the State House in Carlisle.

After the death of William, Mary remarried another Revolutionary War veteran by the name of John McCauley. She was awarded a pension in 1822 by the Pennsylvania State Legislature.

Mary Ludwig Hays McCauley, the heroine of the Battle of Monmouth Court House, died in Carlisle, Pennsylvania, on January 22, 1832, at the age of 78. A marker noting her exemplary service was placed on her grave on the anniversary of the War in 1876.

Margaret Cochran was born in western Pennsylvania on November 12, 1751. Her parents were Robert Cochran, a Scots-Irish immigrant, and his wife, Sarah. In 1756, when Margaret was five years old, her parents were attacked by Native Americans. Her father was killed, and her mother was kidnapped, never to be seen again. Because Margaret and her brother, John, were not at home, they escaped the deadly raid. Margaret went to live with her uncle for the rest of her childhood. In 1772, at the age of 21, Margaret married a Virginia farmer named John Corbin.

When the American Revolutionary War began, John enlisted in the First Company of Pennsylvania Artillery loading and firing cannons. As was common at the time for wives of soldiers, Margaret accompanied John during his enlistment. She joined many other women in cooking, washing, and caring for the wounded soldiers and during battles, bringing water to cool the over-heated cannons.

When General Washington moved the bulk of his army north, he left a small garrison of 2,800 American soldiers behind to defend Fort Washington in northern Manhattan Island, New York. John’s cannon battery was among them.

On November 12, 1776, nine thousand Hessian troops under British command attacked Fort Washington. John was in charge of firing one of two small cannons sitting at the top of a ridge, today known as Fort Tryon Park. During the assault by the Hessians, John was killed, leaving his cannon unmanned. Margaret had been with her husband on the battlefield the entire time, and, after witnessing his death, she immediately took his place at the cannon, continuing to fire until her arm was almost severed and her breast was lacerated by grapeshot.

The British ultimately won the Battle of Fort Washington, resulting in the surrender of Margaret and her comrades and the taking of the last American position in New York City. As the equivalent of a wounded soldier, Margaret was released by the British on parole.

After the battle, Margaret went to Philadelphia, completely disabled from her wound, and would never fully heal. The Executive Council of Pennsylvania granted her $30 to cover her present needs and passed her case on to Congress’s Board of War.

On July 6, 1779, the Board, sympathetic to Margaret’s injuries and impressed with her service and bravery, granted her half the monthly pay of a soldier in the Continental Army and a new set of clothes or its equivalent in cash. With this act, Congress made Margaret the first woman in the United States to receive a military pension from Congress.

Known throughout her community as a bad-tempered, hard-drinking eccentric by the nickname of “Captain Molly,” Margaret died on January 16, 1800, in Westchester County, New York. She was 48 years old.

In 1909, a memorial was dedicated to Margaret Corbin and her compatriots in Fort Tryon Park, Manhattan, New York City, near the location of the Battle of Fort Washington.

In 1926, The New York State Chapter of the Daughters of the American Revolution (DAR) verified Margaret’s records and recognized her heroism and service to the United States through the papers of General Henry Knox.

Margaret’s overgrown grave was located, and her body was exhumed. A West Point surgeon confirmed the skeleton was that of Margaret Corbin by comparison with a post-mortem which showed the left side of the face, chest, and upper arm and left shoulder were badly damaged.

On April 14, 1926, her remains were re-interred with full military honors at the cemetery of the United States Military Academy at West Point behind the Old Cadet Chapel in the West Point Cemetery, making her one of only two Revolutionary War soldiers to be buried there.

The Margaret Corbin Monument was erected by the DAR at the gravesite.