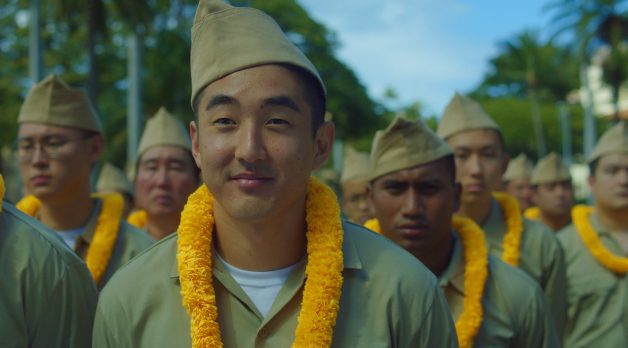 Immediately after Japan’s December 7, 1941 attack on Pearl Harbor and other American bases in the Pacific, the United States declared war on Japan. Several days later Nazi German and Italy declared war on the U.S., embroiling the world into World War II.

The war heightened American prejudice against German Americans and Italian Americans but the racism directed against Japanese Americans was particularly vicious. The calculated response culminated in the forced removal and unconstitutional incarceration of 120,000 residents of Japanese ancestry, including the complete elimination of communities and individuals from the entire West Coast of the United States. This racism was precipitated by the attack on Pearl Harbor but it had deep antecedents in the near half-century of legal, social, and economic policies directed against Asians in general within the United States.

As the war progressed, however, more American units were needed to successfully fight the Axis powers. One such unit was the 442nd Regimental Combat Team (RCT), organized on March 23, 1943, after more than a year during which Americans of Japanese descent were declared enemy aliens, 4-C, by the U.S. War Department. It had taken all that time plus several key events to convince the Roosevelt Administration that these men should be allowed to enter combat for their country.

Eventually, the 442nd, bolstered by the combat-hardened 100th Infantry Battalion, initially made up almost entirely of Japanese Americans from Hawaii already in Italy fighting the Germans, became the most decorated unit in U.S. military history for its size and length of service in the history of American warfare. The 4,000 men who initially made up the unit in April 1943 had to be replaced nearly 2.5 times. In total, about 14,000 men served, earning 9,486 Purple Hearts. The unit was awarded eight Presidential Unit Citations (five earned in one month). Twenty-one of its members were awarded Medals of Honor. Its motto was “Go for Broke”.

The 442nd Regimental Combat Team is best known for rescuing the “the Lost Battalion” in the Vosges Mountains. The 442nd and the 141st Texas Regiment were both part of the 36th Division under the command of Maj. Gen. John Dahlquist. They were fighting in Eastern France, near the German border.

The 442nd had just finished 10 brutal days of fighting to liberate the French towns of Bruyeres and Biffontaine. Finally, on October 23, 1944, the Nisei got clean, dry clothes, hot food and rest. Glorious rest. But not for long.

“Lost Battalion” Were Stranded on a Ridge

Gen. Dahlquist had another trapped unit that needed rescuing. Dahlquist had ordered the 141st Texas Regiment to advance four miles beyond friendly forces. The Texans warned that they would get cut off, but they pushed on as ordered. Naturally, the Germans surrounded them. In fact, 6,000 fresh German troops moved into the area. Der Fuhrer’s orders were to hold the area. No surrender. No retreat.

More than 200 Texans, known as the “Lost Battalion” were stranded on a ridge. They were low on food, water and ammo – just like the men in the 100th at Biffontaine. However, the Texans were not rescued by their own men in the 141st, or by other white soldiers in the 143rd Regiment. Dahlquist ordered the Nisei soldiers to save them.

Once again, on October 25, after less than two days rest and already short of men, the Nisei trudged through the dark and the cold rain. The stranded Texans were about four miles from friendly forces. But, it was more like nine miles – because the hills were steep, the ravines and fields were littered with mines, and the few roads that crossed the terrain were narrow, sodden logging trails bristling with German roadblocks. By early afternoon on October 27, the Nisei were moving toward the narrow ridge that held the besieged Texans.

On the right flank, the 100th chased the Germans across a gully toward the next hill. But it was a trap, and the Germans blasted the Nisei with an hour-long artillery barrage. The shelling wounded 20 Nisei, but the 100th held its ground.

In the center, on the narrow ridge K Company hit a series of three heavily entrenched barriers. By evening, the 100th and 3rd Battalions had gained only a few hundred yards, but they had managed to take 70 German prisoners.

The Lost Battalion’s Situation Was Desperate

By October 29, the Lost Battalion’s situation was desperate. Isolated for six days the Texans had beaten back five enemy assaults. Deaths and casualties mounted, yet they couldn’t evacuate the bodies. They pooled their meager supplies of food and ammo and risked German sniper fire to get water. The Allies tried to send supplies. First, they shot shells filled with chocolate, but the shelling caused casualties. A few days later the Allies dropped supplies by parachute, but most of the packages landed in German-occupied positions.

The 522nd Field Artillery Battalion’s accurate fire hit the Germans without harming the trapped Texans or the Nisei rescuers. Often the tall trees and steep slopes made it impossible to adjust artillery fire properly. The terrain made tank travel almost impossible, too.

The American GIs had to fight with what they could carry; bazookas, grenades, BARs, machine guns, Tommy guns, pistols, and rifles and bayonets.

By October 29, the Nisei had fought for five days but hadn’t made much progress against the heavily entrenched Germans. 3rd Battalion’s I and K companies were on a narrow, exposed ridge. With a steep drop on the left and right, the men had no choice but to go straight up the middle. I Company Private Barney Hajiro was pinned down on the ridge. He saw enemy machine guns kill eight and wounded 21 of his buddies. Then suddenly, a few men, including Hajiro decided to “Go for broke.” He charged up the ridge, shooting his BAR and running 100 yards under fire. He single-handedly destroyed two machine gun nests and killed two enemy snipers. His brave actions spurred his comrades to rally and boldly attack. Hajiro was awarded a Medal of Honor. (Hajiro was awarded the DSC, but in June 2000 it was upgraded to MOH.)

The same day, October 29, Private George Sakato of 2nd Battalion’s E Company led a charge that rescued his pinned squad and destroyed a German stronghold. He earned a DSC, which was upgraded to Medal of Honor in June 2000.

Finally, on October 30, after six days of desperate combat, the 442nd broke through to the “Lost Battalion.” The Nisei infantry in B, I, and K Companies were the first to arrive, but the entire 442nd had helped. Forward observers from the 522nd fought along with the infantry. Members of the antitank units carried the wounded and braved enemy fire. Clerks, cooks, and Nisei from the 232nd Combat Engineer Company joined in combat.

Many were wounded or killed by mines, sniper fire, heavy artillery, and spraying shrapnel. More than 25 of K Company’s wounded were treated by a medic, Technician Fifth Grade James Okubo. Okubo was the only medic to earn a Medal of Honor (Silver Star upgrade), but many other medics braved enemy fire and saved countless lives.

The men of the Lost Battalion and their rescuers exchanged happy greetings, but it was a short celebration. After the successful rescue, after 16 days of almost non-stop combat – the worst the 100th/442nd had ever experience – after losing many of their buddies and officers they expected to be relieved. Instead, Gen. Dahlquist ordered the men to keep pushing and securing the forest for nine more days.

On November 7th, near the village of La Houssiere, Private First Class Joe Nishimoto, an acting squad leader in G Company broke a three-day stalemate against German forces. He destroyed a machine gun nest and with his hand grenade, and killed the German crew of another nest with his Tommy gun. Nishimoto was later killed in action. He received a DSC, which was upgraded to Medal of Honor in June 2000, posthumously.

November 17 when the 442nd was finally relieved, the dead and the wounded outnumbered the living. The 442nd ended up at less than half its usual strength. K Company, which started out with 186 men had 17 left. I Company started out with 185. In the end, there were only 8.

During the six days the 442nd fought to rescue the Lost Battalion, 54 men were killed and many, many more were wounded and sent to hospitals. During the entire Vosges Campaign, 34 days of almost non-stop combat – liberating Bruyeres and Biffontaine, rescuing the 211 Texans, and nine more days of driving the Germans through the forest – the 442nd’s total casualties were 216 men dead and more than 856 wounded.

When Division commander Dahlquist ordered the 442nd to assemble for a recognition ceremony, he scolded a 442nd Colonel. “You disobeyed my orders. I told you to have the whole regiment.” The teary-eyed Colonel looked him in the eye and reportedly said, “General, this is the regiment, the rest are either dead or in the hospital.”

To the U.S. Army, the rescue of the Lost Battalion became one of the top 10 battles in its history. But to many, questions still remain. Why did the General order the 141st to advance nine miles beyond reasonable support, and without protection in the rear? Did Dahlquist use the Nisei more ruthlessly than the other American troops?

Gen. Dahlquist was so much disliked as a person that Lieutenant Colonel Singles, an officer of the 442nd, ran into Dahlquist a few years later and was not willing to shake his hand.

“After returning the salute, General Dahlquist offered his right hand saying, “Let bygones be bygones. It’s all water under the bridge, isn’t it?” Lt. Col. Singles maintained his salute, ignoring the General’s extended hand. Although he rendered proper military protocol by maintaining his salute, he could not forget what many considered the General’s blatant waste of Japanese-American soldiers.

“Comrades who are slain
In our charge on the ridge
Have not died in vain
But forged through heroism a bridge
For all Japanese Americans to cross
This was I Company’s fate.
To prevail with heavy loss
And then there were eight.”
-Lloyd Tsukano

Video of 442nd in action: https://www.youtube.com/watch?time_continue=33&v=CuLrxLJYmWM