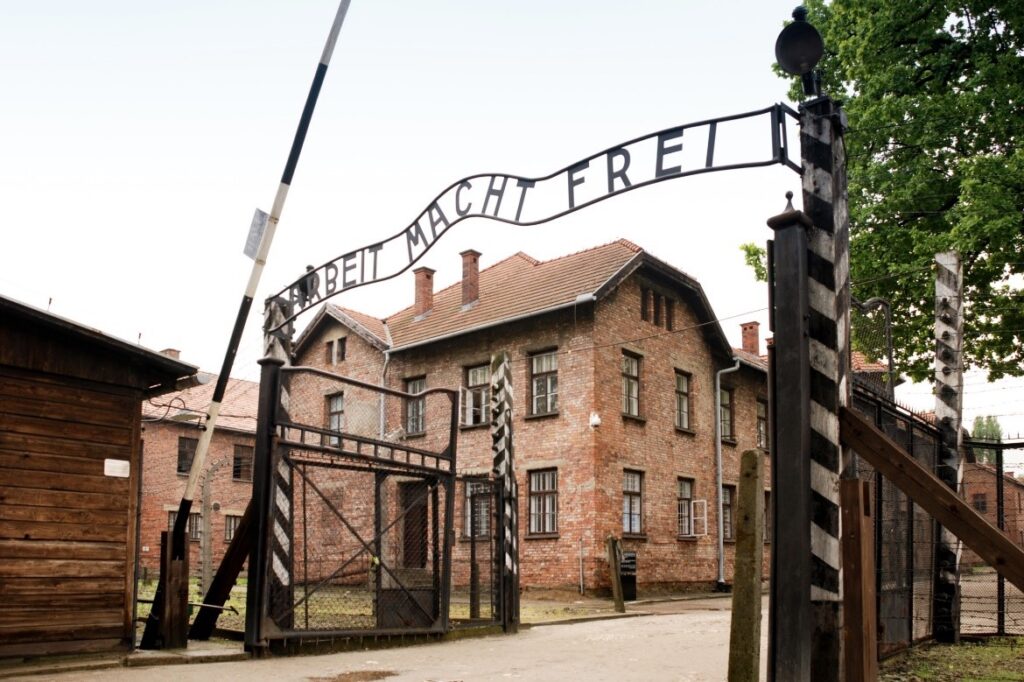 On January 27 1945 the Soviet Army pried open the gates of Auschwitz concentration camp in German-occupied Poland and liberated some 7,000 emaciated prisoners. About 58,000 others had been hurriedly marched westward before the Soviet Army approached. Auschwitz, the German word for the Polish town of Oswiecim, was the site of the largest Nazi concentration camp during WWII. It consisted of a concentration camp, a labor camp, and large gas chambers and crematoria. More than 1.3 million people were sent to Auschwitz between 1940 and 1945. Some 1.1 million of them were killed. Nine in 10 were Jews.

During WWII, the Nazi regime imprisoned an estimated 15-20 million people they perceived as a political threat or inferior, especially Jews. They were held in camps and ghettos across Europe and subjected to abominable conditions, brutality, and murder in what has become known as the Holocaust.

The Nazis experimented with Zyklon B gas to kill prisoners at Auschwitz I. These tests were deemed successful, and the program greatly expanded at Auschwitz-Birkenau. When new deportees arrived at Auschwitz-Birkenau, they immediately underwent selection. Some were saved from being used as forced labor, while others went directly to the gas chambers. This process tore families apart, and separated family members would typically never see one another again.

One such family was the Guttmann family. Irene Guttmann and her twin brother Rene lived in Prague with their parents when German soldiers arrested Irene’s father. He was sent to Auschwitz, where he was killed in December 1941. The twins and their mother were deported to Theresienstadt ghetto and later to Auschwitz, where their mother died. The 5-year-old twins were separated and subjected to horrific medical experiments under Dr. Josef Mengele. Their story is just one of many that occurred during the Holocaust.

On January 18, 1945, as the Soviet Army approached, the Nazis abandoned Auschwitz. The SS tried to hide evidence of the camp’s crimes by burning documents and blowing up several crematoria. The ‘healthy’ prisoners, numbering about 58,000, set off westward on a death march. Very few of them survived. The remaining prisoners, some 7,000, were too sick and starving to march and left to die in the camp.

On that bitterly cold morning of January 27th, prisoners huddled in their barracks. “We heard a grenade exploding near the entrance area,” recalled a former prisoner. “We looked out and saw some Soviet reconnaissance soldiers approaching, guns in their hands. The soldiers came up and said: ‘You are free at last.'”

The Guttmann twins recalled liberation day. “I remember walking out of Auschwitz. I remember trying to look back and around me to see if I could find Irene because I was leaving this place. I did see her, but we had to march on. There was shooting all around us, then we were surrounded by Russians dressed in white uniforms; that was the liberation,” said Rene. Irene, who was too weak to walk, was carried by a Polish peasant woman to her home.

One year later, a charity organization arranged for Irene to come to the United States and other war orphans, where she was adopted. She wondered if she would ever see her brother Rene again. With her adoptive family’s help, they managed to locate Rene, who was living in Prague. The family adopted him as well, reuniting the twins in 1950.

When evidence of the atrocities committed at Auschwitz and other concentration camps came to light, the world was shocked. Decades later, the 2005 United Nations General Assembly adopted a resolution naming January 27th, the day Auschwitz was liberated, as International Holocaust Remembrance Day.