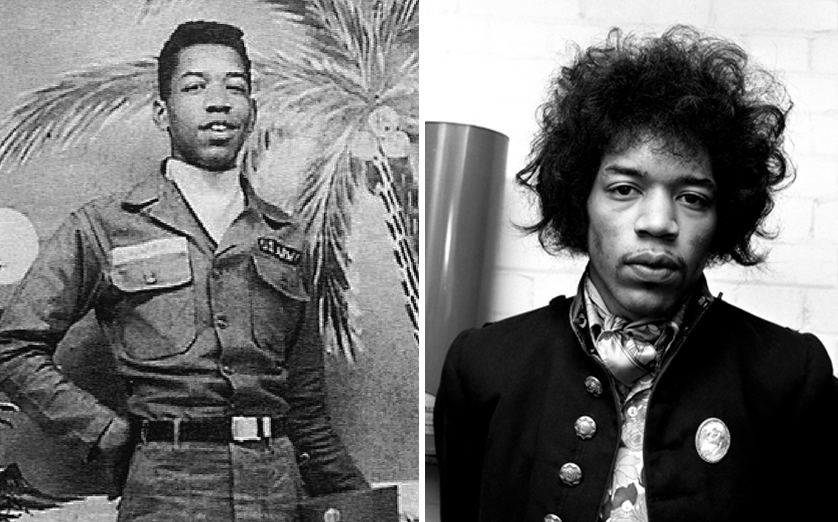 Jimi Hendrix, an American guitarist, singer, and songwriter, widely regarded as one of the most influential electric guitarists in the history of popular music is one of the most celebrated musicians of the 20th century. Did you know Jimi Hendrix briefly served in the U.S. Army?

James Marshall “Jimi” Hendrix was born in 1942 in Seattle while his father Al Hendrix, drafted into the Army during World War II, was imprisoned in an Alabama stockade. Drafted just three days after marrying Jimi’s mother, Lucille Jeter, Al spent a month in Fort Benning, Georgia, and was then sent to Camp Rucker in Alabama. He was a field artillery gunner for Company B of the 903rd Airbase Security Battalion. Their job was to guard the Eighth Airforce’s airstrips, planes, and bomb dumps — traveling wherever the Eighth Airforce went. Al requested leave around the time Jimi was to be born, but he was refused because he lived in Seattle. The army was only allowing five days leave for family births, and he would have had to get right back on the train to Alabama as soon as he got to Seattle. The next day he was thrown in the stockade without charge. He suspected he was put there so he wouldn’t go AWOL to be with his family. Jimi’s parents were troubled by alcoholism and divorced when he was 9. Al was a single parent for the majority of Jimi’s life, working at a variety of odd jobs and struggling to make ends meet. Lucille died in 1958, at the age of 32.

Jimi was drawn to the guitar from a young age, but Al refused to buy him one. Jimi found a one-string ukelele in the trash that he taught himself to play by ear. He didn’t begin playing guitar until the age of 15, shortly after his mother died. Jimi learned to play guitar by picking up licks and chords from guitarists in the Seattle area. He would listen to the radio at home and play along to the songs, learning the guitar sections to each of his favorite songs. He poured all his efforts into music and began earning gigs almost immediately.

Was Hendrix Kicked Out of the Army?

While a gifted musician, Hendrix had little interest in anything else and did not graduate high school. After two instances of being found riding in stolen cars, Hendrix was given a choice between two years in prison or Army service. Hendrix enlisted in the Army on May 31, 1961. He completed boot camp and was assigned to the 101st Airborne Division, stationed in Fort Campbell, Kentucky. Private Hendrix was not much of a soldier, records indicating he was an unqualified marksman. He was often absent for bed checks while playing late-night gigs in nearby Nashville, Tennessee. By the end of 1961, he was in a band, the Casuals, playing Army clubs. In January 1962, he was awarded his Screaming Eagles badge for completing paratrooper training.

However, his stint in the Army was coming to an end. Demoted from Private First Class to Private for his frequent flouting of base rules, Hendrix was known for being found sleeping on duty to his commanding officer’s chagrin. His squad leader formally recommended that he be discharged, calling him “unsuited to the military.” Hendrix was discharged in June 1962, having served only thirteen months of the three years he had enlisted. There are embellishments to this tale told by Hendrix himself and his biographers, of discharge for homosexual behavior; however, there is no evidence that Hendrix was gay. An ankle injury during a parachute jump gave Hendrix the opportunity to bow out of active duty with an honorable discharge, and he was happy to oblige. Had he stayed in the Army, Hendrix would have likely been sent to Vietnam.

After Service: Private James to Jimi

Hendrix moved to Clarksville, Tennessee, in 1963 with his Army buddy Billy Cox, where they continued their band playing. Eventually moving to Nashville, Hendrix played clubs in the South, supporting various bands as a backing musician. Hendrix eventually moved to Harlem, where he had greater success, working with bands and artists such as The Isley Brothers, Little Richard, and Curtis Knight. From there, he hopped over to Greenwich Village for the diverse music scene, which is where his music made an impression on Keith Richards’ girlfriend, Linda Keith. She helped him make contacts like Chas Chandler of the Animals, who brought him out to the UK in September 1966 and assembled the Jimi Hendrix Experience to demonstrate his guitar prowess.

In barely six months, Hendrix wowed more or less the entire London music scene, releasing his first LP in May 1967. Are You Experienced was only beaten out to Number 1 in the UK charts by Sgt. Pepper’s Lonely Hearts Club Band. The band released two more LPs, Axis and Electric Ladyland, in a little over a year, sending shockwaves that resonated not only in Europe but the United States. In the aftermath of Electric Ladyland, Hendrix had become the most highly-paid rock musician in the world. In 1969, he would play Woodstock and forever cement his name in history with what is widely acclaimed as an unforgettable performance.

Hendrix’s performance at Woodstock came at a major transition point in his life since the Jimi Hendrix Experience disbanded earlier that summer. It is seen today as one of the greatest moments of his career, but at the time some American were offended that his take on the national anthem was a means to protest the Vietnam War. Some say that Hendrix used squelching feedback to simulate the sound of exploding bombs. Hendrix is considered an activist in the anti-war movement.

However, Hendrix did not describe his rendition as a protest song. Playing before a large audience of Woodstock attendees who generally saw themselves as cultural and political outcasts, Hendrix’s version incorporated the stylings of music from the era. It is interpreted as a statement that Woodstock attendees were Americans too.

Jimi Hendrix’s death has remained a mystery since he was found in a London hotel on September 18, 1970. Jimi Hendrix spent the night before his death drinking wine and smoking hashish with his girlfriend Monika Dannemann. The next morning, Hendrix was dead — asphyxiated on his own vomit after taking too many sleeping pills, likely an accident. As per statements by Dannemann, she found him in a coma at her basement flat on the morning of September 18, 1970. She called for an ambulance and took Hendrix to St. Mary Abbotts Hospital where he was declared dead. Some believe Hendrix, disillusioned with the music industry, committed suicide.

Hendrix might not have made a strong impact during his brief service in the U.S. Army, but the military’s loss was rock music’s gain. While he is remembered far and wide around the world as a legendary musician, Jimi Hendrix rightfully earned his spot on the Celebrity Roll of Honor.