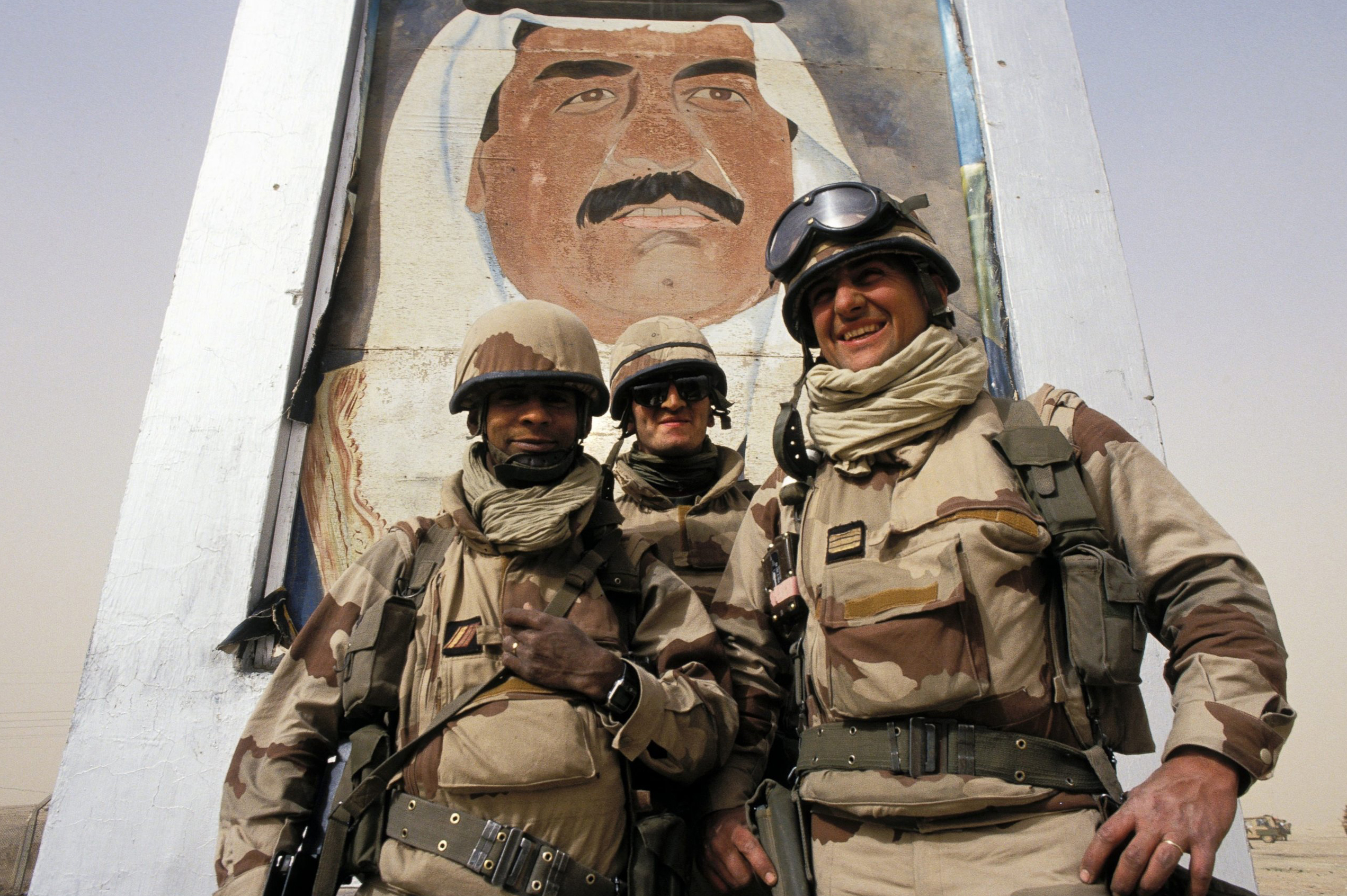 The Screaming Eagles of the 101st Airborne were among the first soldiers deployed to Saudi Arabia following Iraq’s invasion of Kuwait in August of 1990.

Roughly six months later, the storied division would launch an unprecedented airborne assault taking them over 150 miles (241 kilometers) behind enemy lines and within 100 miles (161 kilometers) of the Iraqi capital, Baghdad.

In 1990, a coalition of forces from around the world, headed by the United States, gathered in Saudi Arabia. The task was to remove the Iraqi Army from Kuwait and protect against an expansion of Saddam Hussein’s aggressiveness.

Within 12 hours of the invasion of its southern neighbor, Kuwait, the Iraqi army was without any significant opposition. The world’s 4th largest army at the time now had solid control of Middle East oil production and was moving troops to the border with Saudi Arabia.

The coalition of forces sought a peaceful solution to the conflict and insisted that the Iraqi forces immediately vacate Kuwait. But a defiant Saddam Hussein decided to “double down” and warned of the “mother of all wars.”

Hussein was given an ultimatum and date by which to comply. The stage was set for the first large-scale U.S. military action since Vietnam.

The 101st Airborne would set the stage for a 42-day-long aerial bombardment of Iraqi positions, defenses, and command and control facilities.

Eight Apache helicopters of the 101st Division set off on January 16th under cover of darkness with a mission to take out two Iraqi radar stations. The Apaches, using advanced equipment like thermal imaging, penetrated into Iraq, flying only 50 feet (15 meters) off the deck to approach the sites undetected.

Once in range, the Apaches took out the sites and auxiliary targets with extreme efficiency. Over 40 Hellfire missiles and more than 200 Hydra 70 flechette rockets were fired on Iraqi targets as well as an unspecified amount of 30 mm cannon rounds.

The mission opened up a 20-mile (32-kilometer) wide corridor in Iraqi airspace for coalition forces to fly through without being detected. As the Apaches from the 101st returned from their successful mission, they could hear and see the swarms of coalition aircraft starting their sorties.

The Beginning of Operation Desert Storm

The ground assault to push Iraqi forces out of Kuwait began on February 24th, 1991. After over a month of constant bombardment by coalition aircraft, missiles, and artillery, U.S. Marines led the attack on Iraqi positions in Kuwait.

Other coalition forces would strike out into the Iraqi desert, eliminate or subdue forces encountered, and cut off the Iraqi Army from the Euphrates and Tigris River valleys.

The operation was billed as “innovative” by the coalition commanders at the time but was essentially an engage and flank maneuver on a grand scale.

The 101st had a special task in this “left hook” that would take them 155 miles (249 kilometers) behind enemy lines, transported there by over 400 helicopters.

In December of 1990, when the 101st had been deployed in Saudi Arabia for a few months, questions and criticisms continued to be reported about the combat readiness and effectiveness of America’s “peacetime army.”

Many reports indicated that the Apaches and other vehicles and equipment would not function properly in the desert environment. Furthermore, many critics were vocal in their lack of confidence in the U.S. soldiers’ capabilities.

As Major General Robert Clark reflected later, the soldiers of the 101st themselves were starting to suffer deterioration in their morale. He noted two specific events that lifted spirits and fired up the men and women of the unit.

First, every member of the 101st Airborne received a card from a former member of the 101st, many of whom had served in WWII. The messages on the cards were varied, but a common theme existed in each: You have a date with destiny. Honor the unit, badge, and those that wore it before.

Second, the division was told, “The way home is through Iraq. Time to go to work.”

The 101st Airborne set out with two early objectives in Operation Desert Storm. The first was to set up a forward base behind Iraqi lines named Cobra. Elements of the 101st set out and established this base quickly and effectively.

The second early objective took large elements of the 101st Airborne even further into Iraq and to the Euphrates River. A distance of over 150 miles (241 kilometers) from their base in Saudi Arabia and less than 100 miles (161 kilometers) from Baghdad.

There, the 101st took control of Highway 8, which connected the Iraqi capital with its army in the south.

Now, less than two days into the ground offensive, the Iraqi army was already in full retreat from Kuwait.

At this point, the question wasn’t whether the coalition forces would rid Kuwait of the Iraqi Army, but whether the U.S. led forces could close the noose on Saddam Hussein’s best forces, the Iraqi Republican Guard.

Around the third day of the ground offensive, the 101st set out again to establish a forward base. This time they headed east towards Basra and established Forward Base Viper.

From Viper, the 101st was able to conduct operations against Iraqi forces falling back from Kuwait and Basra, helping to eliminate the ability of those forces to consolidate and reform.

The Highway of Death

Aircraft elements of the 101st Division took part extensively in the turkey shoot of retreating Iraqi forces that are most commonly referred to as the Highway of Death. The destruction and devastation along this stretch of road was complete.

With Saddam’s forces in total disarray, the 101st was already preparing to go on the offensive again, heading even further north into Iraq. However, the political and strategic aims of the conflict had already been achieved, and coalition forces were ordered to ceasefire.

The 101st Airborne Returned with a Heroes’ Welcome

As the conflict wound down, the 101st Airborne returned to the United States with a heroes’ welcome. They had achieved all their mission goals, demonstrated their abilities, and wreaked havoc on their enemy. The division sustained only five soldiers KIA in the conflict.

Commanding General Norman Schwartzkopf commented during one of his press briefings how extremely fast, tough, and effective the 101st had been. He called them the “Lightning in Desert Storm.”