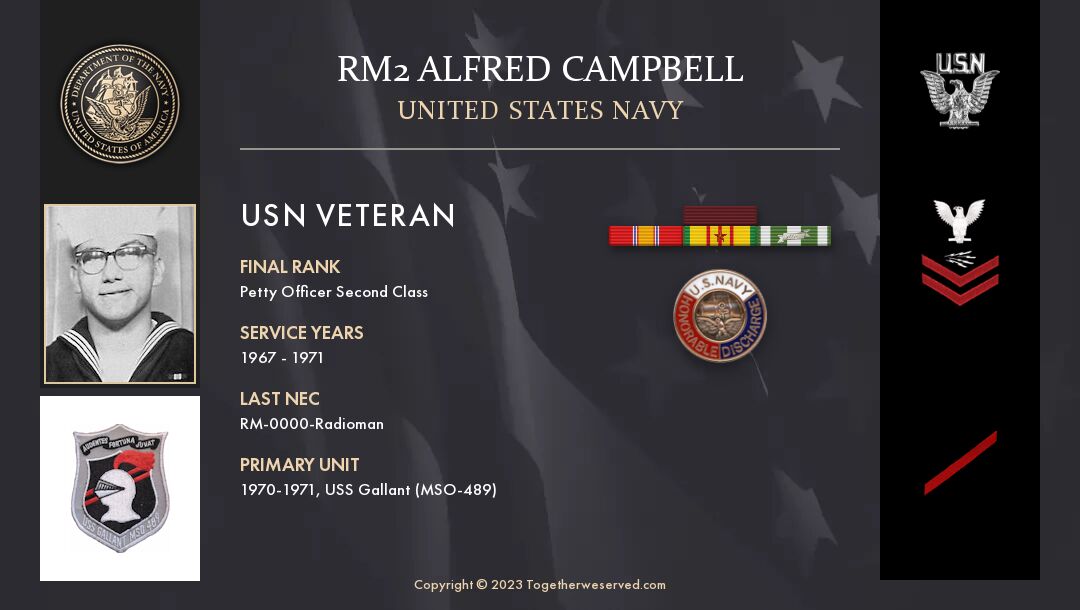 As a Cub Scout, the pack took a trip to the Philadelphia Navy Yard. We went through a submarine, and I was scared the thing would sink or blow up or something, so I ran through it. Going out, we passed all those old mothballed ships, and something inside me rang and said, “I want to be on one of those gray ships someday.

END_OF_DOCUMENT_TOKEN_TO_BE_REPLACED 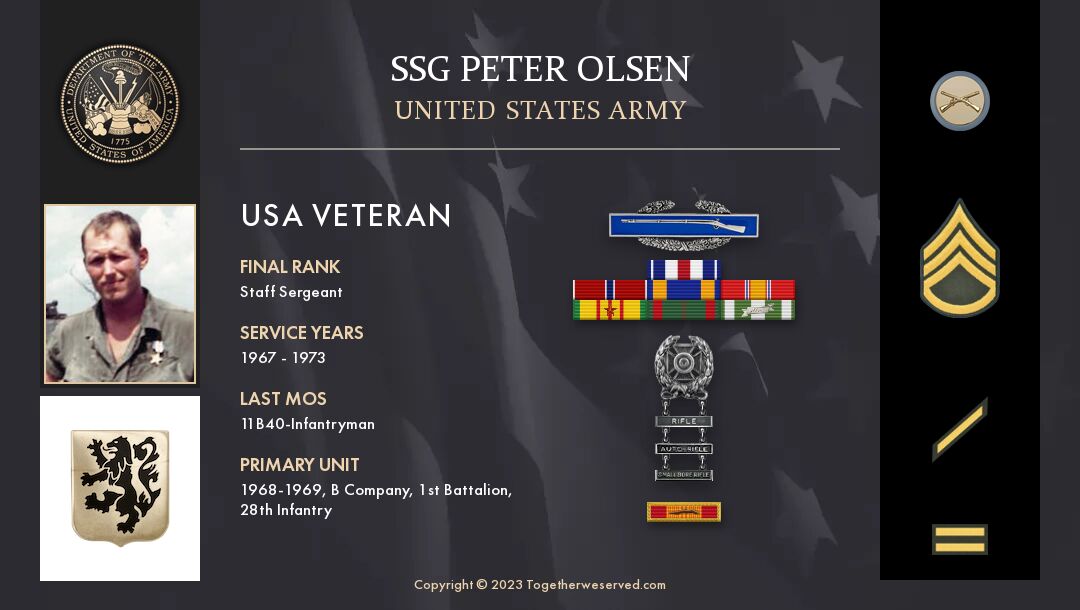 Too much partying, and it turned out a 1.2 GPA would not keep me from being drafted. So I volunteered for the draft. Once I got back from Vietnam, I actually received 2 degrees and maintained a 3.7 GPA while working full time as a police officer. Funny story – After I left school to volunteer for the draft, I thought it would be a quick process. Not so. The first month my draft board did not meet for some reason. The second month the draft board did not take up my request. The third month a draft board member died of old age – no meeting. In the 4th month, the draft board finally met and acted on my request but did not approve it until the 5th month.

END_OF_DOCUMENT_TOKEN_TO_BE_REPLACED 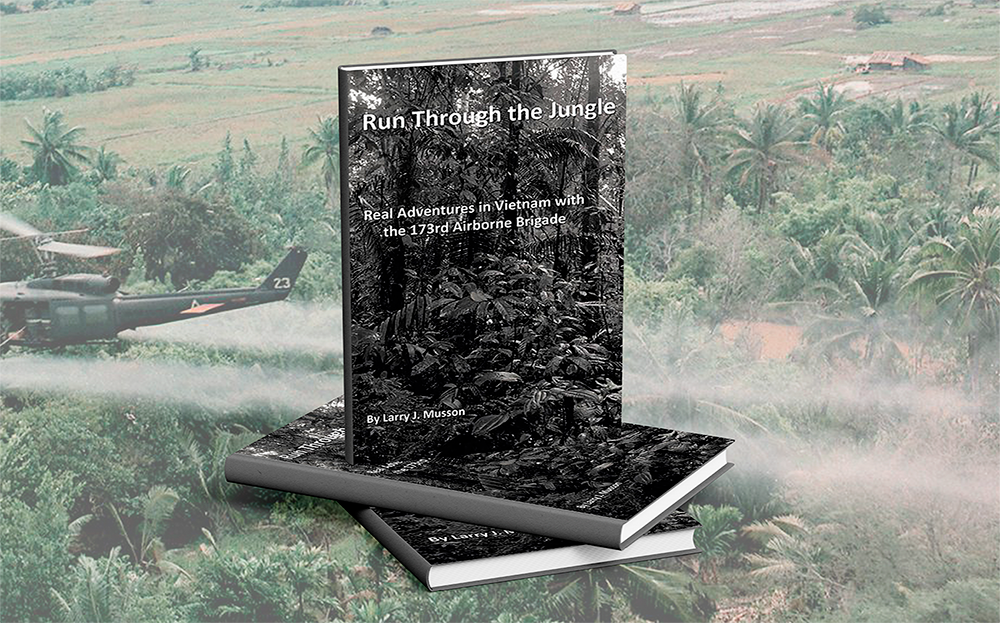 Run Through the Jungle By Larry Musson

Run Through the Jungle is a first-hand account of the combat in South Vietnam, as experienced by Larry Musson and other members of the 173rd Airborne Brigade. A riveting tale, this book is narrated by an equally compelling man. A man who found joy in writing at a young age and used said joy to give us a detailed page-turner in Run Through the Jungle. Larry Musson, no doubt a hero in the minds of many, was born in Shelbyville, Illinois. He grew up in Elwood and was a member of the class of '67...

END_OF_DOCUMENT_TOKEN_TO_BE_REPLACED 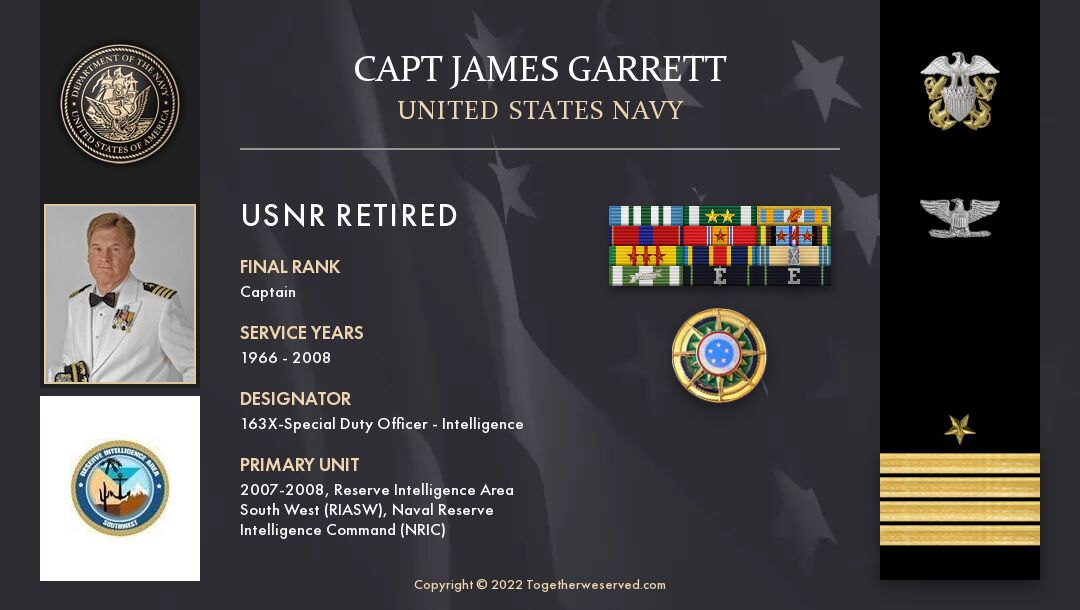 I was graduating from Westminster High School in a few months (1966) and knowing that I would not be able to afford college, I thought enlisting in the military would be a good thing, especially if it was possible to get college paid for afterwards. Being landlocked and with Lowery Air Force Base across town, the recruiting ads I thought the Air Force might be a good place to go. The Air Force recruiter came to my house to talk with me but to my amazement the recruiter told me there was a waiting list, imagine that with the Vietnam War going on.

END_OF_DOCUMENT_TOKEN_TO_BE_REPLACED 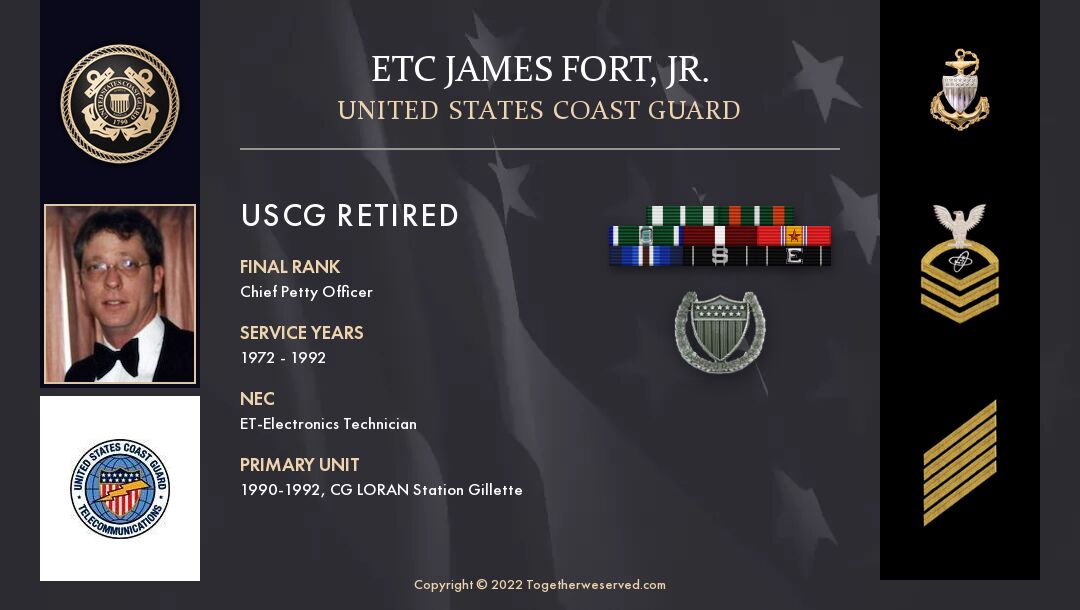 My dad was the major influence on my joining the Coast Guard. He was part of a forward Army recon unit that was captured at the Battle of the Bulge after expanding all their ammunition. His unit was awarded a Presidential Unit Citation, and he earned a Bronze Star for his actions there. My dad also fought in the Korean war earning awards for his actions there.

The Army was going to send him off to Vietnam when that conflict started, and he opted to retire with twenty-three years of service at that time. My dad thought that Vietnam was a war run by politicians instead of Generals and convinced me that the Coast Guard was the best service to go into. Of course, neither of us knew at the time that there were more Coasties killed (percentage-wise) in WWII and the Vietnam war than any other service.

END_OF_DOCUMENT_TOKEN_TO_BE_REPLACED 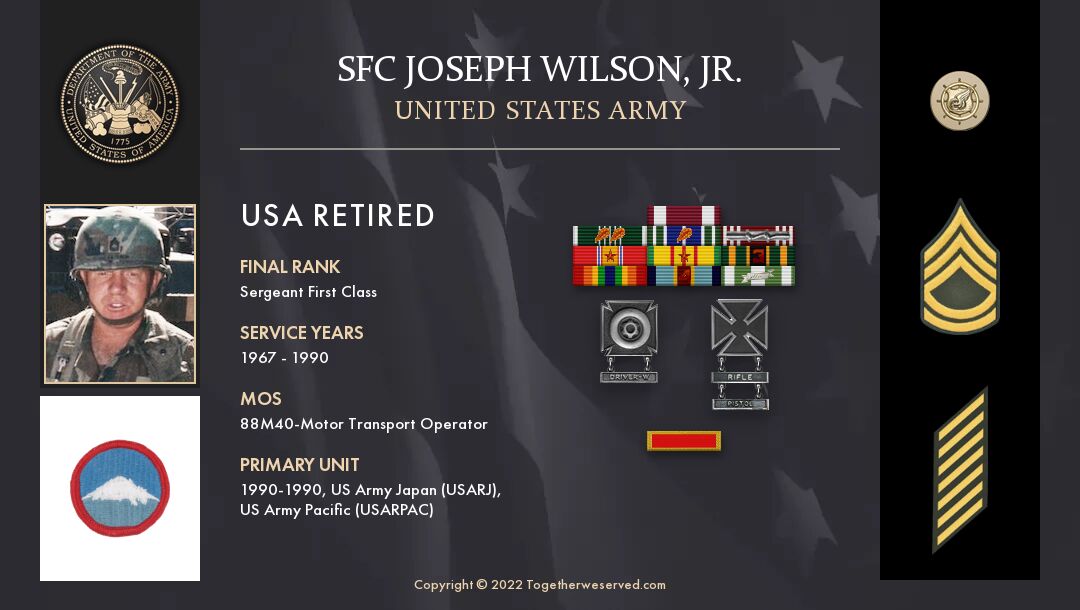 My father was a WWII Navy veteran (1945-47). In 1964 – 65 I became a Cadet with the Civil Air Patrol in the Borah Cadet Squadron in Boise, Idaho, and later with the Gowen Field Cadet Squadron also in Boise, Idaho.Despite them being similarly reserved and not the type of men to brag, I could hardly wait to visit them so I could beg them to tell me war stories. The experiences they shared with me made a lasting impression during my early childhood, which further aroused my desire to serve my country.

END_OF_DOCUMENT_TOKEN_TO_BE_REPLACED 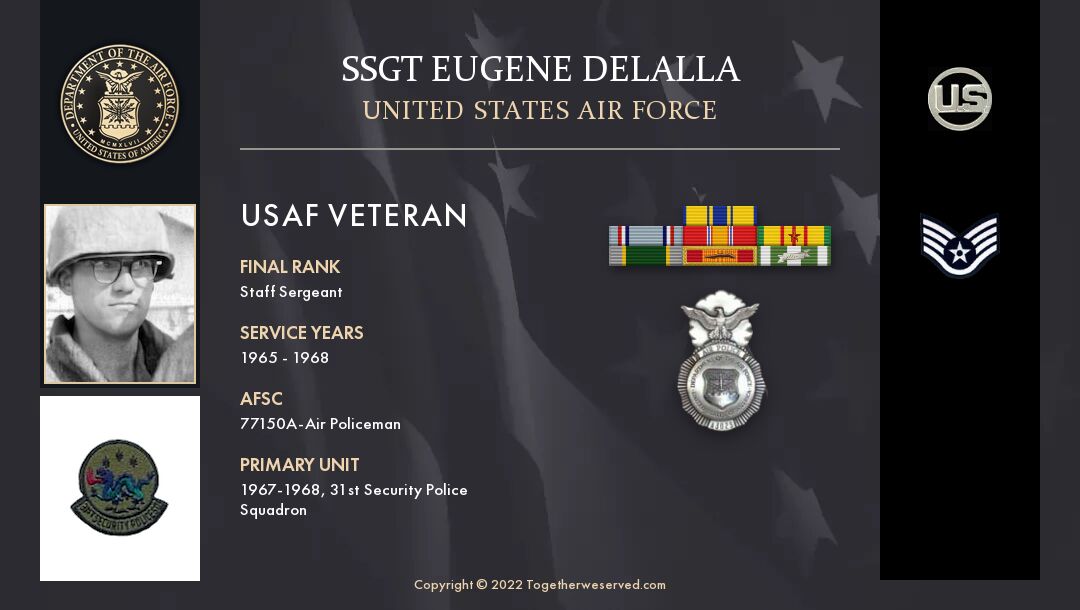 In reality, my first choice of military service was the Army. This was back in ’64. Then, as fate or providence would have it, an Air Force recruiter came to my high school (in the Bronx, NY); from that point on, I began planning my entry when graduation came in ’65.

END_OF_DOCUMENT_TOKEN_TO_BE_REPLACED 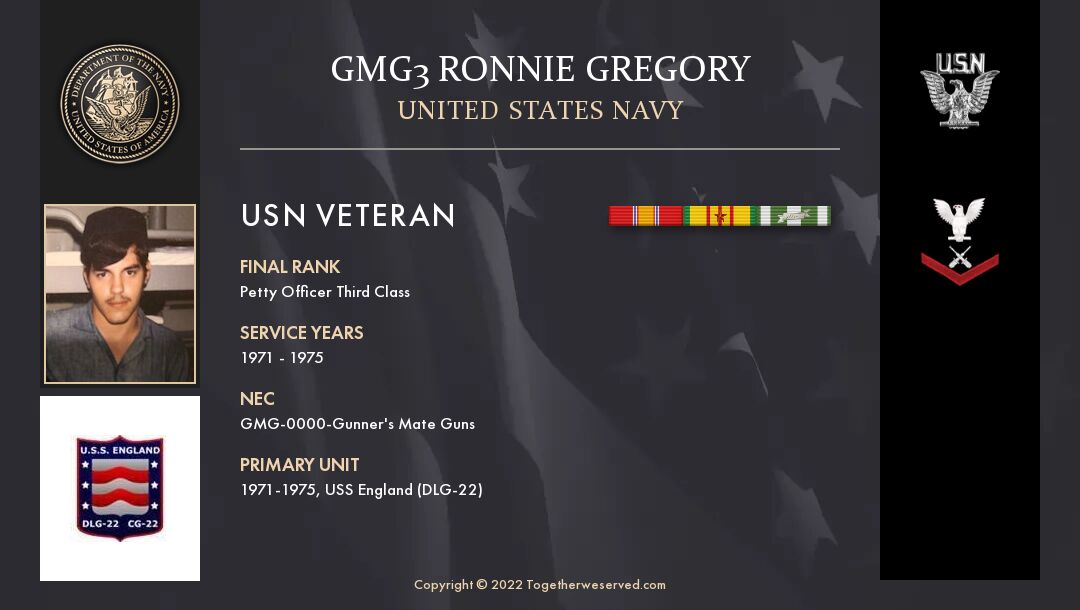 When I became aware that I was not interested in finishing college in my sophomore year, I sought out the local Coast Guard recruiter, but they were not looking for entry-level recruits at that time. As my draft number was low and I was soon to be status 1A, Dad had served in the Navy in WWII, so I talked to the Navy recruiter and enlisted in December 1971.

END_OF_DOCUMENT_TOKEN_TO_BE_REPLACED 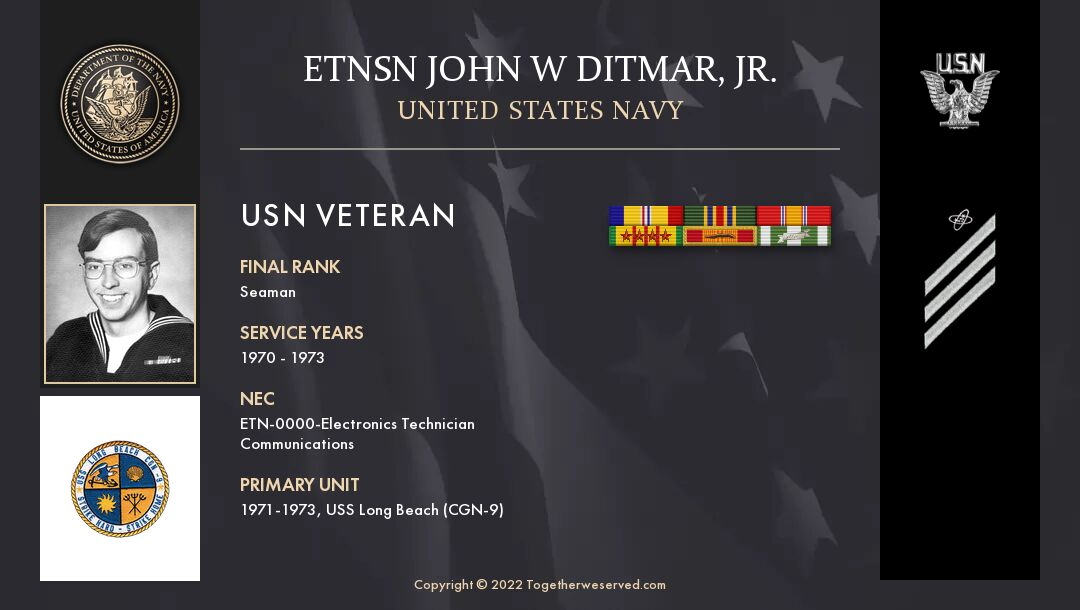 The village I grew up in had a population of around 2000 and was almost surrounded by water, so swimming, fishing, and boating were a natural progression. I loved to watch the bigger boats on Spring Lake and freighters that would come into Grand Haven at a young age. My early years growing up were not much fun.

My father was a good man but was an alcoholic and was mean to my mother and me when he had too much to drink. There was physical violence. My parents never attended church, but some kind neighbors took me a few times with their kids, which opened my eyes to another world. In those days, there was a stigma attached to being an alcoholic, and despite several attempts by myself and others, my father refused any help. This was a time when my conflicting emotions were off the chart.

END_OF_DOCUMENT_TOKEN_TO_BE_REPLACED 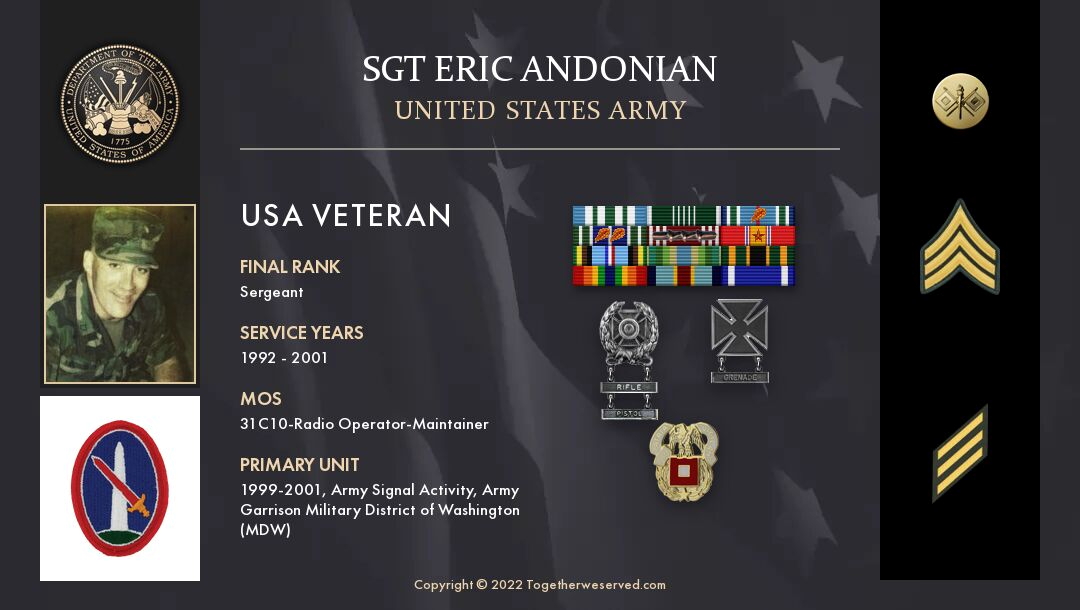 Influencer #1: The military always fascinated me; my dad grew up in Tehran, Iran (an Armenian), and he served in the Persian Army (Iran, 1941).

He was a very proud American and loved this country, and I remember him taking us to Long Beach harbor (California) to see an aircraft carrier (the 1960s). That was an amazing experience (I can still visualize those torpedoes)!

Influencer #2: We lived through the hushed horror of Vietnam, and I think my parents kind of shielded us from it. I don’t remember ever seeing it on TV or talking about it. When I turned 18 (1978), my mom actually hesitated (slightly) when I jokingly questioned signing up for Selective Service registration. She talked about my staying with my friend in Canada if the next war was FUBAR like Vietnam. That surprised me because she strongly supported our nation and its laws.

END_OF_DOCUMENT_TOKEN_TO_BE_REPLACED 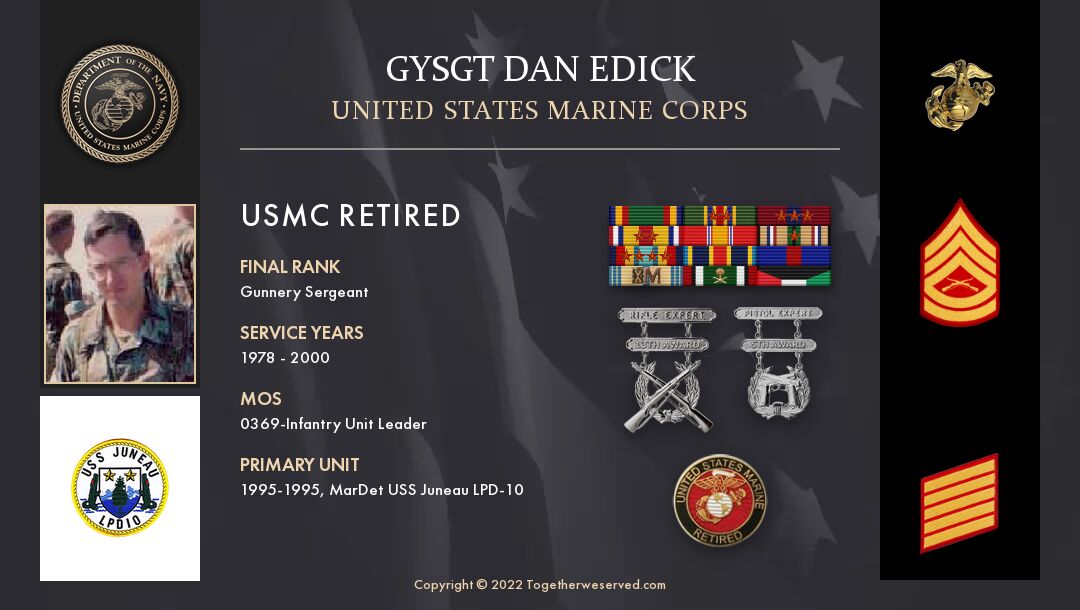 I am a fraternal twin. I knew my parents couldn’t afford to send us both to college, and I personally didn’t want to go. I felt as though my whole life had been spent in school already, and I wanted to do something different.

My father and several uncles served in the military. Some of them retired from the service. I respected them for serving and decided that I wanted to serve my country. My original choice was the Army, so I set an appointment with the Recruiter while a sophomore in high school. They showed no interest in me because of my age, so I left. The following year, I tried again. I sat with the Army and Air Force Recruiter. The Army didn’t impress me as much as the Air Force. The A.F. Recruiter said I was still too young and to come back in another year.

END_OF_DOCUMENT_TOKEN_TO_BE_REPLACED 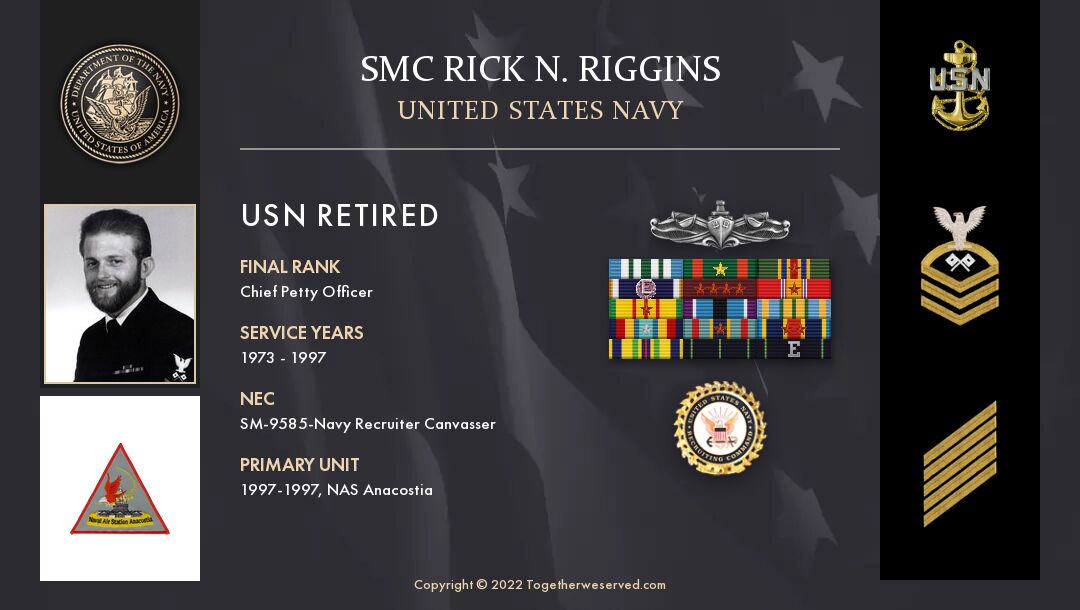 My decision to enlist in the Navy was solely based on the draft that was in effect at the time, and I went in knowing that my number would be called. The funny thing is after I enlisted, the draft was abolished, but it was the best decision I ever made. My family’s history was Army, and I really wanted to change the paradigm, so I went into the Navy.

Those along the way influenced me, like BM1 Mundell, who retired as either a BMCS or BMCM, as he could see something in me that others at the time could not. Also, SMSN Booker T. Arradondo and SN Cap Tasali were with me on my first unit, the USS Tripoli (LPH-10). SMSN Arradondo challenged me at all times to be the best I could be while we were together at our watch station. SN Tasali was always even-tempered, quiet, and a kind shipmate and I learned a lot from him as well. Later in my career, our paths crossed again along my military journey.