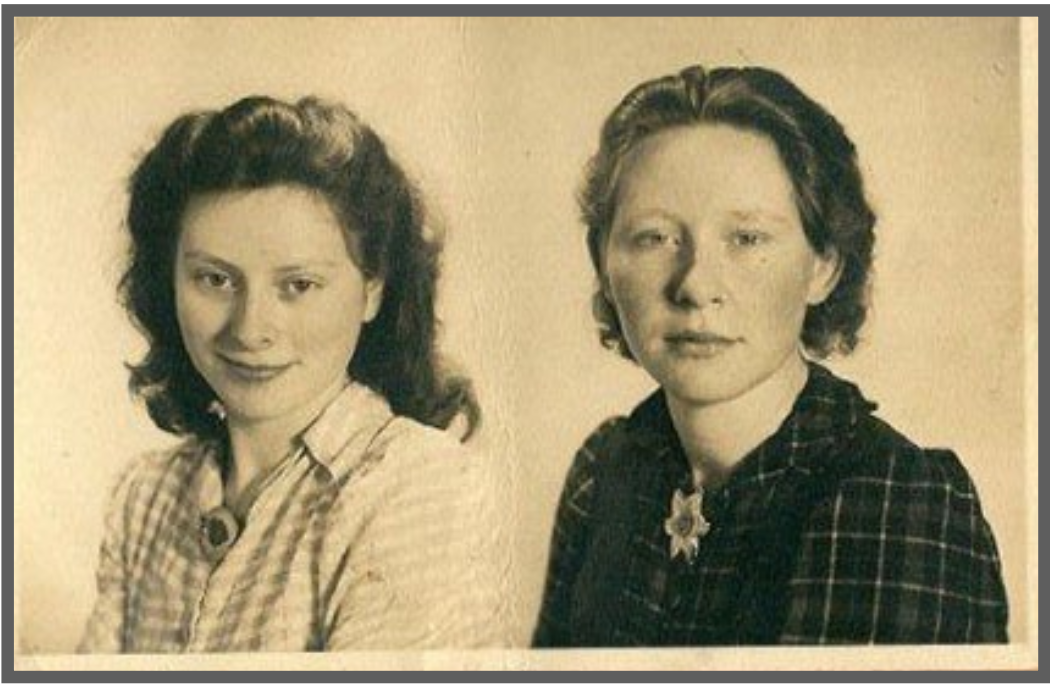 When the Nazis steamrolled into the Netherlands in May of 1940, Jannetje Johanna “Hannie” Schaft and Truus and Freddie Oversteegen were just 19, 16, and 14 years old, respectively.

As for the Oversteegen sisters, their mother, Trijn, had left their father years before. Freddie states of this, “She was just fed up one day – we lived on a large ship in Haarlem, but my father never made any money and didn’t pay anything for the barge. But it wasn’t an ugly divorce or anything – he sang a French farewell song from the bow of the ship when we left. He loved us, but I didn’t see him that often anymore after that.”

Immediately after the Nazis came to town, despite the risks, Freddie goes on, “During the war, we had a Jewish couple living with us, which is why my sister and I knew a lot about what was going on…”

At the same time, their mother also had her daughters join in with her in the rather dangerous task of posting and distributing anti-Nazi and communist literature around town.

Given their brazen activities, word soon got around to the resistance that the girls might be open to joining, with one Frans van der Wiel coming calling in 1941. Freddie states, “A man wearing a hat came to the door and asked my mother if he could ask us [to join the resistance]. And he did; she was OK with it.”

She also states her mother simply requested that they, no matter what the resistance asked them to do, to “always stay human.” Needless to say, they were all for it, though not quite realizing at that point everything they”d be asked to do. She states, “I thought we would be starting a kind of secret army. The man that came to our door said that we would get military training, and they did teach us a thing or two. Someone taught us to shoot, and we learned to march in the woods. There were about seven of us then – Hannie wasn’t a part of the group yet, and we were the only girls.”

Indeed, in the beginning, because of their age and gender, the authorities paid little attention to them. Thus, they were natural message runners between resistance members, as well as ideally suited for smuggling and stealing identity papers to help various Jewish people escape; they also occasionally were tasked with transporting weapons and even helping escort Jews to hiding places- generally, Jewish children as they blended in with the girls well and the authorities, on the whole, weren’t suspicious of the young girls walking along with kids. Thanks to Freddie’s ultra youthful look, particularly when she did her hair up in pigtails, she was often used for reconnaissance missions, as nobody paid attention to her.

However, things escalated from these sorts of tasks with assignments such as helping to burn down various enemy installations. In these cases, the girls were sometimes tasked with flirting with guards while other resistance members slipped in and set the fires.

In 1943, the sisters were joined by a third female member of their resistance cell, Hannie Schaft- a woman who would be one of the most famous Dutch resistance members in all of WWII, with her activities seeing her marked for death by Hitler himself.

When the Nazis invaded, the then 19-year-old Hannie studied international law, particularly human rights law, at the University of Amsterdam. Unfortunately for her, she would soon be given the boot from university owing to refusing to sign a declaration of allegiance to Germany- a requirement to remain a student and something over 3/4 of the rest of the students did. As you might imagine, even if you knew nothing else about her but her choosing to study human-rights law at school and given the activities the Axis were getting up to in the country, she almost immediately joined the resistance.

Naturally, the three girls became fast friends and frequently teamed up for the remainder of the war, with their missions having been expanded to something few women in the resistance were tasked with directly eliminating enemy targets.

Their big advantage over their male compatriots was their age and gender allowed them to get close to enemy soldiers without garnering any suspicion. Thus, the girls were eventually trained with weapons and set to, as Freddie put it, “liquidating” the enemy.

How The Sisters Persuaded the Soldiers

As for the number of people they killed – a question they were frequently asked – they never disclosed, with the sister’s” stock answer to that question being, “You never ask a soldier how many people he’s killed.”

Perhaps their most famous method was flirting and convincing a mark to join one of them for a stroll. For example, in one instance, their target was an SS soldier who they scouted, and, once he entered a restaurant to eat, a slightly drunk acting Truus entered and struck up a conversation. At a certain point, she then suggestively asked if he’d like to go for a walk in the woods with her- a prospect he apparently eagerly accepted.

Beyond luring unsuspecting enemy soldiers and Dutch collaborators to their deaths, sometimes they just killed them outright. As Truus once said after watching horrified as a Dutch SS soldier grabbed a baby from the child’s family “and hit it against the wall. The father and sister had to watch. They were obviously hysterical. The child was dead… I pulled out a gun and shot him dead. Right there and then. This wasn’t an assignment. But I don”t regret it.”

As for Hannie, while the two young girls often went overlooked, she was not so lucky, with her bright red hair and the many missions she took part in helping her stand out. The authorities soon caught on, and she was initially marked as “the girl with the red hair.” As the heat turned up on her and Hitler himself ordered efforts towards her capture ramped up, she began dying her hair black and changed her name.

The Axis got her in the end, however, when she was picked up at a random military checkpoint on March 21, 1945, having been caught with copies of the communist newspaper de Waarheid. She was subsequently tortured for a few weeks but apparently never broke.  Given the war was in its final stages, she may have survived if not for her bright red hair giving her away as it grew and with no dye to keep the roots black. Once the Germans figured out who she was because of this, the then 24-year-old Hannie was slated to be immediately executed- a sentence carried out on April 17, 1945, a mere 18 days before the Germans withdrew from the Netherlands.

Unfortunately, her real name was accidentally revealed to an undercover Nazi operative working as a nurse. What followed from this was her family being detained; though eventually, when it became clear, they didn’t know where she was or anything about her activities, they were let go.

Apparently defiant to the end, it is reported that when the two soldiers tasked with killing her shot her, she fell, but both had missed their mark for a killing shot. Her last words were reported to be mocking the soldiers, allegedly stating after the first volley, “Idiots! I shoot better!”

The sisters survived the war but suffered from post-traumatic stress disorder, with Truss burying herself in art and Freddie stating she quickly got married and started a family as her way to cope. Her son, Remi, would state of this, “She shot… people… but she hated it, and she hated herself for doing it.” Freddie would also state, “I’ve shot [them] myself, and I”ve seen them fall. And what is inside us at such a moment? You want to help them get up.”

Truss added, “It was tragic and very difficult, and we cried about it afterward. We did not feel it suited us… I wasn’t born to kill. Do you know what that does to your soul? …One loses everything. It poisons the beautiful things in life.”

In the end, both sisters lived to the ripe old age of 92, with Truus dying in June of 2016 and Freddie following her in September of 2018, the day before her 93rd birthday.