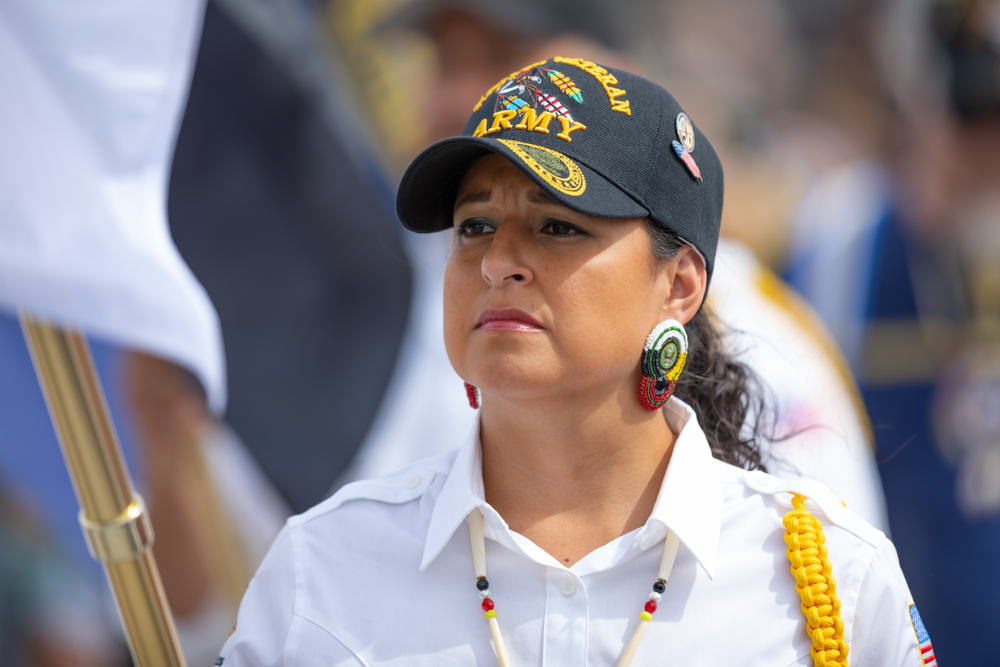 Throughout American History, Native Americans have distinguished themselves with bravery and courage in military service to their country, often without enjoying the same rights and privileges afforded other soldiers.

During WWI, more than 10,000 Native Americans served in the American Expeditionary Force. The majority were volunteers, and most were not considered U.S. citizens. Only U.S. citizens were eligible for the draft. Despite this, the government required Native American men to register for the draft, causing frustration and sometimes rebellion. Many hoped their service would lead to the government granting them full U.S. citizenship. At the time, only Native Americans who accepted an allotment of land under the Dawes Act of 1887 received citizenship. As a result, thousands of Native Americans served before they even won the right to vote. It was during WWI that military officials realized the value of Native languages to transmit sensitive information. German officials could not decipher coded instructions passed by telephone, radio, or telegraph using these Native languages. Code Talkers, as they came to be known, played a critical role in both WWI and WWII.

Native American soldiers participated in the WWI Meuse-Argonne offensive. William S. Harjo, a Creek Indian, was killed in France and awarded the Croix de Guerre military medal for his actions during that offensive. He served in the 142nd Infantry, 36th Division. An Oklahoma reporter accompanying the regiment spoke of the contributions of Harjo and other Native Americans who “gave their all” as German shells exploded all around them. “Among these men who gave their lives for the sake of all we hold sacred in the name of democracy are to be found numerous men of the original Americans. These Indians have borne their part all the way through,” he said.

Native Americans also made remarkable contributions during WWII. In 1942, the first 29 Navajo Code Talkers were sworn in. Before the war ended, more than 400 Code Talkers participated, creating an unbreakable code that helped win the war. Samuel Holiday served in an elite Marine unit of Code Talkers. He went behind enemy lines on Iwo Jima to locate a Japanese artillery unit advancing on American forces. After locating the artillery unit, Holiday sent a coded message directing Marine artillery fire. With his help, U.S. forces eliminated the threat, and Holiday replied with a coded message saying, “Right on Target!” Code Talkers were a key factor in military victories at Iwo Jima, Saipan, and several other major battles in the Pacific Theater.

During the Iraq War, Pfc. Lori Piestewa became the first Native American woman in the military to die as a result of combat. She was killed in 2003 after her convoy was hit by a bomb in Nasiriyah. Piestewa, a single mother of two small children, was first reported missing. She became a household name and the adopted daughter of many Native American tribes as a worried nation awaited word of her fate. When military officials confirmed Piestewa’s death, the nation mourned with her family. She was 23-years-old, the daughter of a Vietnam veteran, and the granddaughter of a WWII veteran.