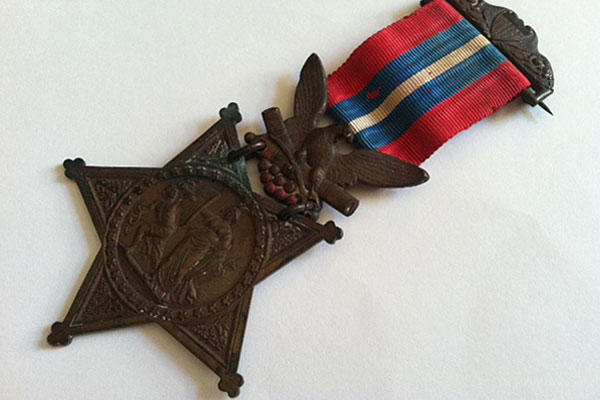 The long-lost Medal of Honor belonging to the “Lion of Little Round Top” has been found.

The Medal awarded to then-Colonel (and later Maj. Gen.) Joshua L. Chamberlain, for his “distinguished gallantry” in leading the 20th Maine volunteers on the second day of the Battle of Gettysburg, came by mail to the Pejepscot Historical Society in Maine in July from a donor who wished to remain anonymous.

Historians from the Smithsonian Institution, the Library of Congress, and the U.S. Army have since verified the authenticity of the Medal.

“Though it seems almost too good to be true, we are confident that we are now in possession of Joshua Chamberlain’s original Medal of Honor,” said Pejepscot Historical Society Director Jennifer Blanchard.

“All of the experts we’ve consulted believe it to be authentic, and we are tremendously honored to return the medal to Chamberlain’s home” in Brunswick, Maine, which is now a museum open to the public, Blanchard said in a statement.

After Chamberlain’s death in 1914, the Medal came into the possession of his last living descendant, granddaughter Rosamond Allen, the Times Record of Maine reported.

When she died in 2000, the contents of her estate were donated to the First Parish Church of Duxbury, Mass., and the anonymous donor found the Medal in the back pages of a book he had purchased from the church, the newspaper said. The donor said the Medal was given to the historical society “to honor all veterans.”

Chamberlain, who served four terms as Maine governor after the war and was president of Bowdoin College, was called “one of the knightliest generals in the Federal Army” by an adversary — Confederate Gen. John B. Gordon.

The “Fighting Professor” who taught languages and rhetoric had several horses shot out from under him through 24 battles, in which he was wounded six times, from Antietam to Appomattox.

It was on July 2, 1863, that he passed into legend on the second day at Gettysburg in command of the 20th Maine, which held the far left flank of the Union Army on Little Round Top.

Longstreet sent his Alabamians up the hill in one last push. Chamberlain later wrote that his troops were nearly out of ammunition. “At the crisis, I ordered the bayonet,” he wrote.

In the desperate melee, a rebel officer aimed his handgun at Chamberlain at point-blank range and fired.

“In the excitement, his aim was poor and, strange to say, I was not hit,” Chamberlain wrote. “I struck the weapon from his hand with my saber.”

The stunned Alabamians fell back or surrendered under the weight of the charge by the 20th Maine. The flank had not been turned; the line had held. The next day, the charge by massed Confederate troops under Maj. Gen. George Pickett would be thrown back by the federals, and the Union would be saved.

Chamberlain’s feats at Gettysburg were dramatized in the best-selling novel “The Killer Angels,” by Michael Shaara, and the Chamberlain character was played by actor Jeff Daniels in the movie “Gettysburg.”

“It’s a tremendous privilege to join with the Pejepscot Historical Society, and indeed, the people of Maine, in welcoming home General Joshua Lawrence Chamberlain’s Medal of Honor,” said Sen. Angus King, I-Maine., in a statement.

“This special moment undoubtedly captures the hearts and minds of all Mainers, as we continue to proudly recognize the legacy of General Chamberlain’s leadership and heroism,” King said.

Chamberlain continued to serve his state and nation long after the war. At age 70, he volunteered to fight in the Spanish-American War and later wrote that he was “greatly distressed” at being turned down.