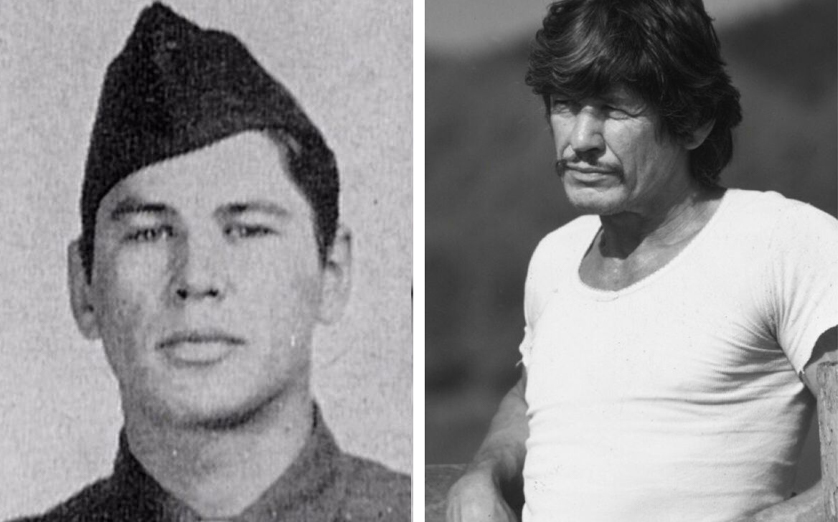 Charles Dennis Buchinsky (or Bronson) who served in the US Army Air Force between 1943 and 1945, went on to be one of Hollywood’s pre-eminent tough guys, the face of the Death Wish film franchise. However, his time as the silver screen’s top draw was preceded by a very humble childhood.

Charles Bronson Went to War to Escape the Coal Mine

The 11th of 15 children, Charles was born in 1922. He grew up speaking three languages at home, but none of them English. The Buchinsky family lived in Ehrenfeld, Pennsylvania, in the coal region of the Allegheny Mountains, and spoke Lithuanian, Russian, and Greek. Raised mainly by his mother and elder siblings, Charles’ father died when he was ten, which meant that Charles needed to contribute to the family’s upkeep. He worked first in the mine office, then in the mine, earning a paltry $1 for every ton of coal he extracted. The Buchinsky family was extremely poor, often going hungry, and lacked for decent clothes. Charles once had to wear his sister’s dress to attend school. In spite of this, Charles graduated high school, the first of his family to do so. He continued to work in the mine until 1943, when he responded to the call for able-bodied men to join the war effort, and enlisted in the United States Army Air Forces at the age of 21.

Charles Buchinsky served in the 760th Flexible Gunnery Training Squadron, and went on to be a nose gunner on one of World War II’s most famous aircraft, the Boeing B-29 Superfortress. In spite of his Pennsylvania roots, he still spoke English with a strong enough accent that his comrades thought he was an immigrant. He flew with the Guam-based 61st Bombardment Squadron, within the 39th Bombardment Group. They were responsible for conducting combat missions against the Japanese home islands. Buchinsky flew 25 missions in total, receiving a Purple Heart due to wounds sustained in battle. After the war concluded, Buchinsky was discharged and worked many odd jobs before joining a theatrical group in Philadelphia.

In 1947, Buchinsky met Harriet Tendler, a fellow fledgling actor, at a Philadelphia acting school. Despite Tendler being from a successful dairy farming family, and Buchinsky being a penniless coal miner, they obtained her family’s consent to marry and were wed in 1949. The Tendler family supported them both while they were trying to break into show business. They had two children together. Buchinsky began getting small credits in 1951, appearing in 10 films in two years. He was noteworthy in House of Wax (1953) as Vincent Price’s deaf-mute sidekick Igor. The director, Andre DeToth, used him again in Riding Shotgun (1954) and Crime Wave (1954). However, with McCarthyism on the rise, it became necessary for Buchinsky to distance himself from his Eastern European roots and choose a less Slavic stage name. Buchinsky went with Bronson, a name fitting for the stoic strongmen he was increasingly depicting on screen.

As Charles Bronson, he was increasingly cast in TV as well as film roles. He had the grizzled look and presence on camera that lent itself to casting in crime stories, westerns, and noir dramas. His first leading role was when he was cast as Mike Kovac, a combat photographer gone freelance in ABC’s detective drama Man with a Camera, which ran between 1958 and 1960. Bronson was now enjoying steady work, with leading man roles in smaller pictures and supporting actor jobs in larger ones. His career took off after his role in John Sturges’ The Magnificent Seven (1960), and was cast again by Sturges with a lead role as ‘The Tunnel King’ in The Great Escape (1963). In spite of his success in these roles, he seemed unable to land the position of leading man in major motion pictures. In 1965, he divorced Harriet, his first wife. He had another prominent role in a highly regarded film, The Dirty Dozen (1967), but was only the third lead. Bronson remarried in 1968, choosing another actress, this time Jill Ireland. They would star in fifteen films together during their careers, and raise two children together, as well as their children from previous marriages.

From Miner to Nose Gunner to Hollywood Leading Man

As the 60s transitioned to the 70s, Bronson took up more European film projects. Sergio Leone praised him highly for his work on the epic spaghetti Western Once Upon a Time in the West (1968) which, while a financial flop in the States, was huge in Europe and vindicated by history as a feat of cinema. Bronson was the leading man in the French thriller Rider on the Rain (1970), which won a Golden Globe for Best Foreign Language Film. After starring in several more European films over the next couple of years, Bronson won a special Golden Globe Henrietta Award for ‘World Film Favorite – Male’, an accolade he shared with Sean Connery.

With these projects under his belt, Bronson was at last Hollywood’s biggest draw, commanding a fee of $1 million a picture. The mining boy too poor for clothes was now living in a Bel-Air mansion. He took on his most famous role, that of widow Paul Kersey, in Death Wish (1974), a role he reprised four times in Death Wish II (1982), Death Wish 3 (1985), Death Wish 4: The Crackdown (1988), and his final role in a theatrically released film, Death Wish V: The Face of Death (1994), at the age of 73. Bronson made a string of films with the Death Wish director, Michael Winner, as well as with action director J. Lee Thompson. Sadly, Bronson’s ruggedness worked against him when he auditioned for the role of Superman for the 1978 film, Christopher Reeve instead getting the nod. Bronson’s second wife, Jill, passed away in 1990 of breast cancer. He remarried in 1998, again to an actress, Kim Weeks, the same year that he retired from acting due to ill health. At the age of 81, on August 30 2003, Charles Bronson died of respiratory failure related to metastatic lung cancer.

Would Bronson have been the same cinematic force without his experience fighting and bleeding for his country in the Second World War? We can only speculate. Together We Served recognizes and honors his achievements, both in service to the United States, and the silver screen.