Operation Torch Then And Now by Jean Paul Pallud 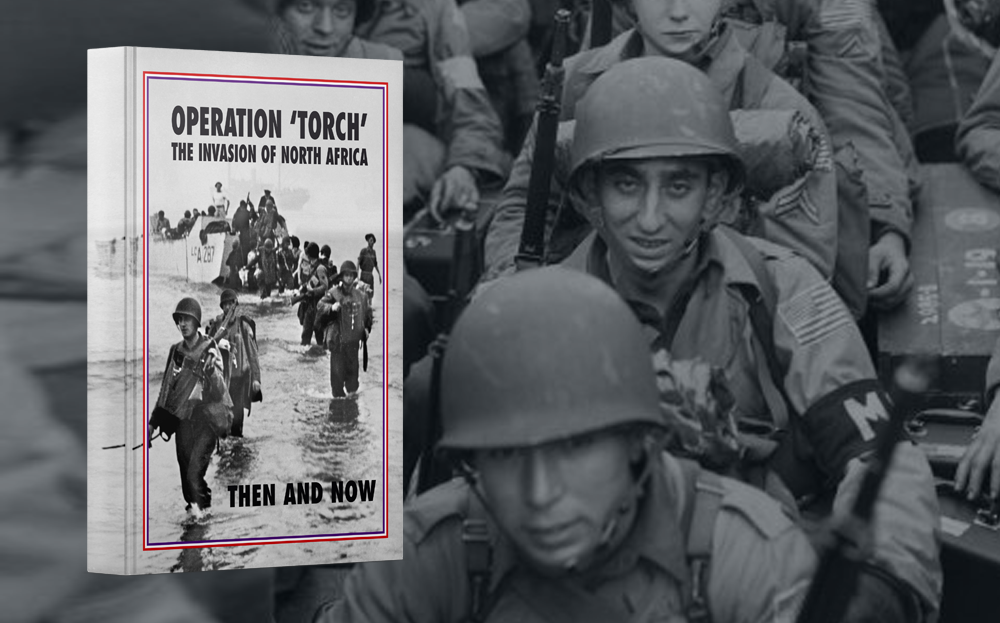 The Allied invasion of North Africa is a convoluted tale of politics, diplomacy, grand strategy, and a military campaign.

Operation Torch introduced the Americans to the swings and roundabouts of land combat against the Axis Powers and showed up some of the military inconsistencies of their allies – the British. The great partnership was underway on the rocky road to total victory in 1945.

The invasion pitted Frenchman against Frenchman and culminated in the total defeat of Germany and Italy on the continent of Africa. Victory buoyed the Allies, setting them on course for the invasion of Italy.

None of this satisfied Stalin, of course, but we’re too far down the road to get entangled in debating the rights and wrongs of the Allied strategy. There was a victory at the end of the campaign, and this is what mattered more than anything else.

The team at After the Battle continues its mission to cover the legacy of the Second World War with this predictably efficient look at Operation Torch. Jean-Paul Pallud shows no sign of slowing his pilgrimage down, and this book represents another well-crafted notch in his literary bedpost.

Torch Operation ‘Torch’ The Invasion of North Africa: Then and Now by Jean Paul Pallud

Torch is forever linked to a number of legendary events from Longstop to Kasserine and beyond. There are Tiger tanks and other icons added to the mix.

But the campaign is far more complex than casual glances suggest. The Anglo-Americans had to deal with a fractious Vichy regime and the ambitions of the Free French in addition to accommodating each other. They also had to beat the enemy.

Mr. Pallud makes a sad point of explaining how traveling to essential wartime locations, let alone photographing them in Algeria, Libya and Tunisia, has been the subject of immense difficulty in the period that followed the Arab Spring.

Some places are dangerous in the extreme, and this confirms that it is the ‘now’ that eclipses the ‘then’ for perhaps the first time in this epic series of books. I can imagine the frustration. A friend of mine was working in Libya before the Gadaffi regime fell, and he mentioned the allure of a country where so much had taken place out in the desert.

He had been out to a number of locations and had notions of finding rusty old weapons and other treasure. But a new conflict saw him scuttling home, leaving all that promise undone.

The book does absolutely everything we have come to expect from After the Battle. Wonderful to look at, it combines a steady mix of essential reference and battlefield nous, and it will fit in well with the earlier volume looking at the Desert War.

It never ceases to amaze me just how much survives in the shape of buildings and other features extant seventy-odd years ago, even though a great deal had been swept away by the likes of Muammar Gadaffi and his regime.

One thing that gave me great pleasure was discovering a reunion of sorts between the photographers Geoffrey Keating and Reggie Coote of the long-lost Daily Sketch newspaper. Their pictures appear on several pages of this book.

They both left the paper for war service in 1939. Geoffrey was one of the leading figures of the Army Film and Photographic Unit, his adventures appearing regularly in Alan Moorehead’s classic desert war trilogy.

He was awarded the Military Cross at Tobruk. Reggie Coote was one of the unsung press snappers of the period, but he enjoyed a solid career. His wartime service was as an official photographer for the Royal Navy.

If you were to look back over my previous reviews of After the Battle books, you would appreciate what an invidious task it is to offer a critique of books I could never write.

To me, they are peerless, and I have been able to explain my appreciation of both them and the monthly magazine to Editor-in-Chief Winston Ramsey, who seemed to have heard a lot of that sort of thing over the years. I grew up on this stuff, the material providing the inspiration for my own books, albeit decades after my initial introduction—all in good time.

I’ve had a hectic summer, and I had been staring at this book on my to-do shelf for so long that the shelf, itself, is gone. A house move disrupts so many things. But it was worth the wait. Operation Torch joins a long line of essential reading from our friends at Hobbs Cross, and I do wonder where they will head next.