Killing The SS by Bill O’Reilly 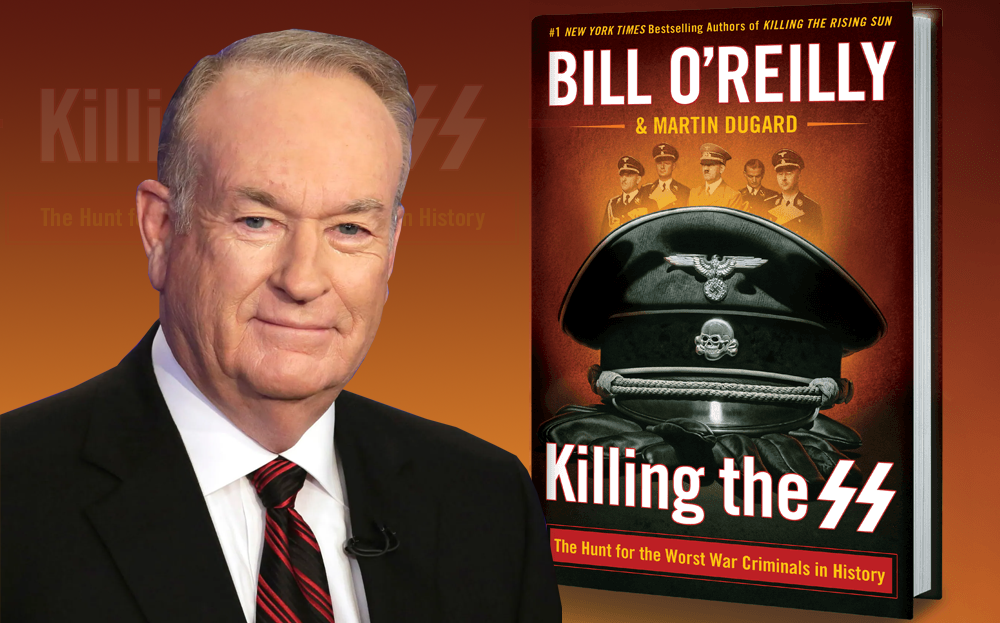 As the true horrors of the Third Reich began to be exposed immediately after World War II, the Nazi war criminals who committed genocide went on the run. A few were swiftly caught, including the notorious SS leader, Heinrich Himmler. Others, however, evaded capture through a sophisticated Nazi organization designed to hide them. Among those war criminals were Josef Mengele, the “Angel of Death” who performed hideous medical experiments at Auschwitz; Martin Bormann, Hitler’s brutal personal secretary; Klaus Barbie, the cruel “Butcher of Lyon”; and perhaps the worst Nazi of all: Adolf Eichmann.

Killing the SS is the epic saga of the espionage and daring waged by self-styled “Nazi hunters.” This determined and disparate group included a French husband and wife team, an American lawyer who served in the army on D-Day, a German prosecutor who had signed an oath to the Nazi Party, Israeli Mossad agents, and a death camp survivor. Over decades, these men and women scoured the world, tracking down the SS fugitives and bringing them to justice, which often meant death.

Written in the fast-paced style of the Killing series, Killing the SS will educate and stun the reader. The final chapter is truly shocking.

Readers Reviews of Killing The SS, The Hunt for the Worst War Criminals in History

Friends of mine know me to be a left-of-center democrat. Definitely not a reliable conservative or republican voter. Thus, they might be surprised at my response to this invaluable educational resource that NEEDS to be used widely in our educational system.

Just a month ago, Bob Woodward’s book on Trump was released despite a furious Presidential uproar. Now, Bill O’Reilly’s book, released two days ago, focuses attention on the hunt for war criminals following the end of World War II. Mind you, I and most of my generation witnessed aspects of the events portrayed in this book, either up close or from afar. Still, it is an invaluable reminder of what happened after the brutal murders of so many innocent Jewish people and other people due to racial, ethnic, and religious hatred and persecution.
~William Anderson

The most important Jewish mantra from my lifetime and beyond “NEVER-AGAIN!” will forever and always be a life-sustaining pledge! Because of this personal dedication, I can wholeheartedly state that what is told in this book is not new untold revelations. But what the author(s) have done so professionally and intelligently is the melding of multiple major Nazi CRIMINAL war survivors who fled the world’s authorities and were eventually tracked down by self-proclaimed “Nazi-Hunters” and the State of Israel they are all tracked followed and discussed in this one book where most books in the past are not as all-encompassing. Of course, there is not as much individual detail in this one book as there are in previous individual books on the less than animal excrement with names like Eichmann, Mengele, Barbie, Bormann, and others.
~Rick Shag Goldstein

The “Killing” series of historical events by authors Bill O’Reilly and Martin Dugard are fascinating, well-researched back-in-time accounts of different eras. Their most recent release of “Killing the SS”, the hunt for the worst war criminals in history, is simply captivating. For this reader, some of the story was known, and a lot was not. That around 10,000 former Nazi’s were allowed to immigrate to America following the war is mind-boggling.

And, then there is the role of the Vatican and the Red Cross, who assisted between 8,000-10,000 Nazi’s immigration to South America. The search for Adolf Eichmann in Argentina was especially interesting for this reader, who had walked the streets of Buenos Aires numerous times and could easily see the city of 1960 when the Mossad captured Eichmann and flew him out in the middle of the night.

Even after all these years, it is hard to come to grips with the evil that the Nazis brought this world. As the authors suggest, one really cannot really come to an understanding of these crimes against mankind, until visiting one of the concentration camps, as this reader and his wife did when they visited Dachau on a dark, cold, snowy December day, that continues to haunt us after seeing the ovens. We pray that God does not forgive these monsters.

It was just not the men of the SS who were evil, but also the women guards at female concentration camps like Ravensbruck. One of those women was Elfriede Huth, who, following the war, immigrated to the United States and lied about her role at Ravensbruck and lived in San Francisco for over 30 years before she was found out and expelled back to Germany. She and other Nazis that immigrated to the U.S. and lied about their roles have collected over $20 million from Social Security.

As with all the “Killing” books, it is essential to have one’s iPad close by, as there is no shortage of googling that needs to be done to uncover additional information about these criminals and events. As usual, great jo,b Mr. O’Reilly & Mr. Dugard!
~Robert James Vandevoort

There are currently more than 17 million books in the Killing series in print. He currently hosts the ‘No Spin News’ on BillOReilly.com. He lives on Long Island.