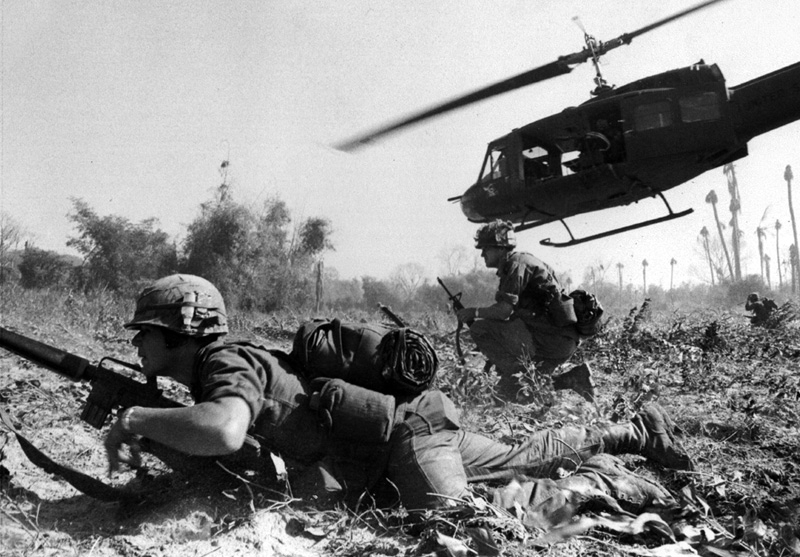 Vietnam was a country torn by war long before Americans became involved in the fighting. French domination was interrupted by the Japanese occupation in World War II, during which Communist leader Ho Chi Minh formed his Viet Minh organization and began guerrilla operations against both occupying powers. The Viet Minh came to power when Japan fell, and the French Indochina War began in 1946 as France attempted to regain control over its colony. The war ended in May 1954 when the Viet Minh mauled the French in the Battle of Dien Bien Phu. The Geneva Accords then divided the country into North and South Vietnam.

Ho Chi Minh took power in North Vietnam and one million refugees fled south. The United States became involved in the defense of South Vietnam as the guerrilla activity by Communist-led insurgents intensified. The first Americans were killed in 1959. There were 342 advisers in Vietnam in January 1960, but after John F. Kennedy’s inauguration as president in 1961, the number rose rapidly to 11,000. Lyndon B. Johnson made president upon Kennedy’s assassination in November 1963, ordered the first airstrikes against North Vietnam the following August. Escalation was rapid once the 1964 elections were over. General William C. Westmoreland assumed command of the U.S. Military Assistance Command, Vietnam (MACV), as well as of the U.S. Army, Vietnam (USARV), formed in 1964.

Johnson ordered a major troop buildup in 1965, and on May 5, the 173d Airborne Brigade redeployed from Okinawa as the first Army combat unit in Vietnam. By the end of the year, there were 154,000 military personnel in Vietnam, and over sixteen hundred combat deaths had already been recorded. American troop strength reached 536,000 in December 1968. By that time South Vietnamese armed forces totaled 826,500, and allied forces included 50,000 troops from South Korea, over 7,500 from Australia, and smaller groups from the Philippines, Thailand, and New Zealand.

President Richard M. Nixon was inaugurated in 1969 with pledges to end the war with honor. Although American forces reached their peak of 543,482 in April, reductions began almost immediately thereafter. Nevertheless, domestic U.S. opposition to the war continued as 500,000 protesters marched in Washington on April 4, 1970.