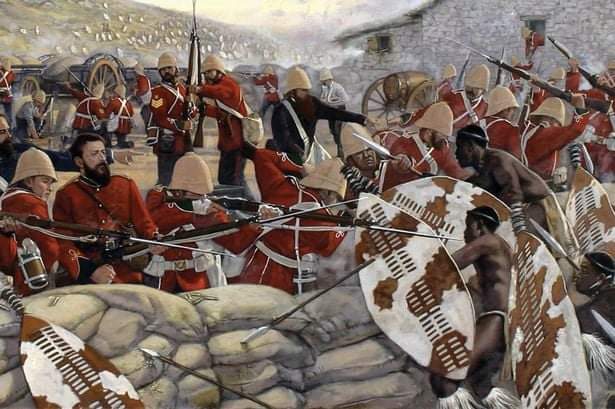 I recently reviewed a biographical history of the men who flew on the famous Doolittle Raid of 1942 where I professed strong approval of that kind of book.

We now must jump back further to the year 1879 for a similar and equally effective work by the respected Zulu War historian James W Bancroft.

This book, “Rorke’s Drift: The Zulu War, 1879”, is the sum of decades of work, provides biographies of the men awarded the Victoria Cross for their actions during the Anglo-Zulu War of 1879, a conflict marked by the shocking defeat of the British at Isandlwana followed by the heroics of Rorke’s Drift over the period of 22nd to 24th January.

But there was much more to the conflict than those iconic events. Britain’s war with the Zulus tends to be defined in the broadest modern perception by the film “Zulu”, a 1960s classic, which tells a story of the defense of Rorke’s Drift, rather than the story.

I love the movie and it does, without a doubt, inspire pride in the British defenders and encourage interest in the conflict itself. I heard Tom Hanks discussing it on the radio a few weeks ago where he professed a love for the movie and he did a Michael Caine impression as a bonus of sorts to go with it.

This illustrates how a movie can create its own history placed on top of the real events. Is it a bad thing? No, but we need to keep tabs on the reality and Mr. Bancroft’s book helps the cause.

The conflict grew out of a mixture of the bellicose ambitions of the Zulu king Cetswayo butting up against the determination of British colonial figures to bolster their position at a time when Britain’s imperial interests in southern Africa faced a degree of uncertainty as Dutch Boer settlers continued to oppose the expansion of colonial administration.

Meanwhile, the British had fought a succession of wars against tribes reluctant to accept the new reality but there were never enough imperial troops to do all the work and the available forces would find themselves hard-pressed in 1879.

Cetswayo’s impressive army had made mincemeat of indigenous opposition but there were only relatively few occasions when Zulus faced up to European settlers and the king’s determination to push out on the borders of his kingdom was bound to flutter European hearts as fears of a Zulu invasion spread.

Colonial leaders saw an opportunity to force the Zulus into a conflict that would remove them from future concerns. Although military men were minded to see such a conflict as far more of a challenge they had little option but to take on the Zulus and with this in mind Cetswayo was presented with an ultimatum designed to be unacceptable to him precipitating a British invasion. This was all very well, but the Zulu reaction would be ferocious.

Britain’s war with the Zulus commenced in a dangerous mixture of overconfidence and incompetence that led to the disaster at Isandlwana. But there were heroics, nonetheless, that would eventually see the award of three VCs for the battle, although two of them were made in 1902 after the terms of the medal were changed to allow posthumous recipients.

The award to Private Samuel Wassall gathered no controversy, but the later posthumous awards to two officers who attempted to save the Queen’s Color of their battalion were not so well received. Lieutenants Coghill and Melville died in their attempt but were suspected by a number of senior soldiers of using the fate of the Color as a pretext for saving themselves while their comrades were literally being cut to pieces.

The senior British soldier Garnet Wolseley was an uncompromising figure who did not favor the award of gallantry medals. His reservations about Coghill and Melville also applied to the award of eleven Victoria Crosses for the defense of Rorke’s Drift where a reinforced company of the 24th Foot held off around four thousand Zulu warriors in a terrifying ordeal where the British fired upwards on twenty thousand rounds with their Martini-Henry rifles.

Wolseley was critical of the award of the VC to two British officers at Rorke’s Drift because he did not admire them as soldiers at all. The company commander Gonville Bromhead and sapper officer John Chard faced considerable jealousy from other officers for their achievement, but they gained the admiration of Queen Victoria, a factor that helped them in later life.

Nine other medals went to men of the 24th and other branches of the British military and no other battle has seen so many awarded for one occasion.

The horrors continued at the Tombi River and Hlobane Mountain, where more British soldiers met grisly ends at the hands of uncompromising Zulus. Reading of these encounters invites strong comparison with the travails endured by settlers and soldiers clashing with Native Americans as they pushed west.

There is no question that a mix of fear and admiration built up around the Zulus whose complex society and martial traditions were a match for any foe they could get within stabbing range of.

The lone VC at Tombi was Color Sergeant Anthony Clarke Booth who saw his officer ride off to “get help,” abandoning a bewildered and outnumbered wagon train caught at night in a terrifying ordeal that saw many helpless men butchered in their tents.

Clarke Booth’s actions were heroic, to say the least, and having shepherded the survivors he was prepared to go out again but was prevented from doing so. Four VCs were awarded for actions at Hlobane Mountain included the award to Redvers Buller, one of the greatest soldiers of the age.

The war continued with the British needing reinforcements before they could square up to Cetawayo at his capital, Ulundi.

Lessons had been learned by this time and the Zulus would face a large force using artillery and Gatling guns but this material advantage was not decisive and a series of sharp fights were necessarily leading to the award of several more VCs.

Victory did not save the reputation of the commanding general of the British campaign, Lord Chelmsford. His overconfidence and poor strategy from the very start had cost the British Army dearly and it would not be forgotten.

This is an excellent book. Each action is reported in meticulous detail before biographies of the medal recipients add further information of their deeds and a great deal about the men themselves.

That they were heroes is beyond doubt but despite modern day aversion to events recalled in lurid accounts such as “Deeds That Thrilled the Empire” a century ago, it is only right to say that the gallantry and ferocity of the Zulus was openly admired and treated with much respect from the outset by the soldiers who faced them. They were great warriors and in defeating them many of the recipients of the VC and other significant gallantry medals gained a kudos that lasts to this day.