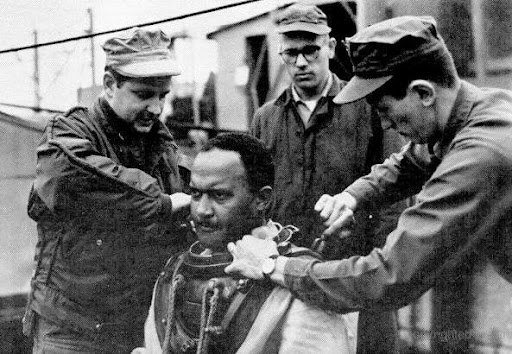 Carl Maxie Brashear came from humble beginnings, which gave no hint of the significant course his life would later take. Carl was the sixth of eight children born to sharecroppers McDonald and Gonzella Brashear in rural Tonieville, Kentucky, on January 19, 1931. Even though their home did not have electricity or running water, Brashear remembered a very happy childhood. The children found entertainment in telling jokes and playing with their father. Carl’s great uncle was a preacher, and he attributed the family’s endurance through difficult times to their strong Christian faith.

At the age of 17, Carl Maxie Brashear had an interest in joining the Army but got his first taste of the prejudice rife in the military at the time at the hands of an abusive recruiter. Not to be dissuaded, Brashear met with a kind naval recruiter and passed the entrance exam that very day. On February 25, 1948, Brashear joined the US Navy shortly after all military branches had been desegregated by US President Harry S. Truman.

African Americans at this time in history, however, were most often relegated to mere stewardships, serving meals and cooking. Brashear was determined, though, and after much coaxing, his Commanding Officer finally consented to his request to apply for diving training.

While attending diving school in Bayonne, New Jersey, Brashear faced hostility and racism where notes were attached to his bunk saying, “We’re going to drown you today, nigger!” and “We don’t want any nigger divers.”  It was at times like these that he found inspiration in the words of his father, “You get back in there, Carl, and you fight! You do your best!”

He did just that.

Despite all the racist threats, Brashear received encouragement to finish from Boatswain’s Mate First Class Rutherford and graduated 16 out of 17.

In addition to the challenges of overt discrimination within the Navy, there were other obstacles to overcome.

The diving equipment available in 1948 was heavy and unwieldy compared to that of today. The Mark V Deep-Sea helium suit weighed 290 lbs. A diver had to have the stamina of diving 300 feet deep while wearing those 300 lbs. Carl was sent to a Beach Masters Unit in Florida in 1949 and, after seeing the Mark V Unit in action, was hooked. He qualified with the Jack Brown Rig and then later with the Mark V in 1953.

By 1951 Brashear was a Master at Arms and serving temporary additional duty at Salvage Diving School. In 1965 he saw duty on the USS Shakori as Chief Boatswain’s Mate. He soon became Leading Diver and Port Duty Chief.

Carl Maxie Brashear And His Team Searched For the Bomb at 2,500 Feet.

Despite already overcoming so many obstacles, it was in 1966 that Brashear would face the greatest challenge of his life. On January 17, 1966, a US Air Force B-52 G Bomber carrying a hydrogen bomb collided with a KC – 135 refueling tanker off the coast of Palomares Spain. In March, Brashear and his crew were assigned to retrieve the bomb in 2500 feet of water.

After searching for months along the coastline with no success, Carl talked to local fishermen who saw the bomb fall. They told him he was too close to the shoreline. The Navy crafted a bomb that was a replica to see how it would appear on the sonar screen. After finally locating the bomb, Brashear’s crew went in and rigged a three-legged spider with grappling hooks attached to each leg. The spider was attached to a submersible ALVIN, which would enable the crew to attach parachute rigging to the bomb. The operation was well planned and should have found success.

Carl Maxie Brashear Was in Danger of Losing His Naval Career

However, at 5 a.m., a large swell caused a change in the ship’s position, and in the next few minutes, Carl was in danger of losing his hard-fought naval career, as well as his life. The timing of the swell was horrific. The atomic weapon slipped from the parachute rigging and sank again. Brashear saw a pipe break loose from one of the ships, and later reported, “I got all the sailors out of the way, but I didn’t get myself out of the way.” The pipe flew across the deck and hit him below the knee.

The situation was grim: at sea, with no doctor or morphine available, and a leg with multiple fractures. The crew was unable to stop the bleeding with mere pressure to the wound, so even though it went against protocol, a corpsman, in a desperate attempt to save a life, resorted to two tourniquets. Carl, critically wounded, was transferred to another boat to get him to a helicopter for emergency transport. The helicopter was not fueled. It was six hours after the accident that Brashear finally made it to Torrejon Air Force Base. Upon arrival, they declared the lifeless man D.O.A. The examining physician sent him to the morgue. Fortunately, a physician checked him one more time and found a faint heartbeat.

The bleeding continued, and Carl received 18 pints of blood, twice that of the average person. His foot became infected and gangrene set in before they transferred him to a German hospital. He was finally transferred to Portsmouth Naval Hospital after two long months of frustrating failures. Carl reached his limit and requested that his leg be amputated. His goal was to get back to diving as soon as possible. He underwent four guillotine surgeries, finally stopping four inches below the knee. This finally stopped the incessant infection.

Walking on Land With Wearing His Leg Prosthesis

In November of 1966, he was fitted with a prosthetic leg. The Navy was already in the process of discharging him. Refusing to admit defeat, he snuck out of the hospital and managed to dive in a deep-sea rig. He documented this dive with photographs, and it was these pictures that would help to make his case before a Navy review board. Although the doctors couldn’t help but be impressed by his feat, they were not convinced enough to allow him to return as a Navy diver. True to form, Brashear would not give up, and he would not give in. His relentless persistence finally moved the doctors to send him to Deep Diving School in Washington, DC.

This would be the most demanding period of his life. Brashear was required to prove himself with one physical test after another. As he noted, it was all the years of fighting discrimination that gave him the inner strength required to meet this ultimate physical challenge.

Wearing his leg prosthesis, as well as the 290-pound Mark V helium gear, Brashear successfully walked on land, as well as up 12 steps. If that wasn’t difficult enough for a new amputee, the training required running with the other dive students regularly. When he ran, his scar tissue would break loose, and blood would leak into his artificial leg. He told no one and would treat himself by soaking his leg and prosthesis in hydrogen peroxide and betadine, fearing that a trip to the infirmary would give the Navy ammunition to discharge him. As he pointed out when he lost his leg, he had not yet achieved his goal of Master Diver, and that goal was what fueled him through that painful time.

In March of 1967, the doctors finally transferred him to Second Class Diving School at Norfolk. He was restored to full active duty and full diving status in April of 1968, the Navy’s first amputee diver.

While working at the Diving School, his favorite trick was to push the students in the water and make them swim as hard as they could. They would complain, but in the third week of school, he would come out with his prosthesis under his arm. He said the kids almost had a heart attack, but it certainly gave them a startling perspective on their own attitude towards the challenges of the course.

It was in 1970 that he finally attained the goal he had striven for through so many trials some years. He was named Master Diver, the first African American in Navy history to do so.

Carl retired from the US Navy in 1979 as a Master Diver and a Master Chief Petty Officer. Even though he hadn’t graduated from high school upon entering the Navy, he earned his GED while serving and, upon retirement, graduated from college with a degree in Environmental Science. He worked for the government as an engineering technician, as well as an environmental protection specialist.

It was a 20-year effort to bring Brashear’s story to the public. There were several attempts to tell his story that never came to fruition. It was in 2000 that the film Men of Honor’ finally hit the big screen. It starred Cuba Gooding Jr. and Robert De Niro. It was directed by George Tillman Jr. Carl served as an advisor to the movie.

In 1999 during the filming, the crew had to be schooled in the heavy dress of the Mark V. Cuba took to the water like a professional. Carl was on the set for several days, and Cuba confided in him that he was frightened when the lights went out after the helmet was lowered over his head. The helmet leaked a little water, and the tender had to tighten it more. Despite those challenges, Brashear was very pleased with the final product. He felt the movie was very powerful and sometimes uncomfortably close to reality.

Though Carl proved to be quite successful in achieving his Navy and diving goals, he admitted that at times his family life suffered because of his devotion to his work. He was married and divorced three times and had four sons, one who died in 1996 from a heart attack.

In 2006 Carl Brashear was in failing health, and one of his sons, Philip, was serving as an Army pilot in Iraq. His family knew Carl’s time was short and requested that Philip come home immediately. Philip did just that and said it was as if his father was holding on until he arrived. The children shared a great weekend together with their father, who died the following Tuesday, July 25, 2006, of respiratory and heart failure at the Naval Medical Center Portsmouth, Portsmouth, Virginia. He was 75 years old. He is buried at Woodlawn Memorial Gardens in Norfolk, Virginia.

True to his father’s encouraging words, Carl Maxie Brashear never gave up and always gave his best, whether the challenges came in the face of prejudice and discrimination or that of facing life as an amputee. He said his father always had a positive attitude and made the best of a bad situation. Carl certainly did that, and more. He is rightfully recognized as the first African American Navy Diver and to hold the titles of Master Diver and Master Chief Petty Officer, as well as the first amputee to return to full active duty as a diver in the US Navy. His determination and work ethic serve as an inspiration to divers and non-divers alike.

That’s what Legends are made of.