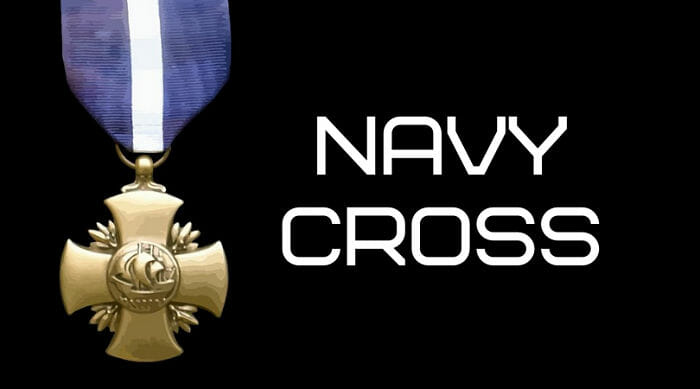 Ask any Marine who was Lieutenant General Lewis Burwell “Chesty” Puller and each would quickly respond by saying. “Why, he was the greatest, bravest and most highly decorated Marine in Marine Corp history.” Another would inevitable say, “He was not only a tough, no nonsense Marine he is also the only one awarded five Navy Crosses.” Both would be right. During his career, Puller fought guerrillas in Haiti and Nicaragua, and participated in some of the bloodiest battles of World War II and the Korean War where he earned his five Navy Crosses, an Army Distinguished Service Cross and a Silver Star.

Now ask any Sailor who was Rear Admiral Roy Milton Davenport and while some submariners might know the answer, the majority of Sailor would not even venture a guess. Yet, like Marine “Chesty” Puller, he too was awarded five Navy Crosses making him the first individual (Puller was the second individual) and only Sailor so honored.

A student of Christian Science, Davenport was dubbed the “praying skipper” and was known for his daring attacks against Japanese ships, often executed on the surface to gain additional speed. In all, he was credited during the Pacific War with sinking eight Japanese ships and damaging 10. While none of the men under his command were lost, he and his crews experienced many close calls and escapes. He credited his religious faith for his successes.

Davenport served as a submarine executive officer on the USS Silversides (SS-236) under Lt. Cdr. Creed Burlingame and later commanding officer of the USS Haddock (SS-231) and USS Trepang (SS-412).

USS Silversides (SS-236) first action was May 10, 1942 when the submarine used her 3-inch (76 mm) gun to heavily damage a Japanese gunboat near Japanese home islands. During this 75 minute action, an enemy machine-gun bullet killed one of her deck gunners, TM3 Mike Harbin, the only man lost in action aboard Silversides during World War II. Harbin was buried at sea later that evening.

Seven days later, while maneuvering through an enemy fishing fleet and approaching her targets, Silversides‘ periscope became entangled in a fishnet marked by Japanese flags held aloft on bamboo poles. The sub continued her approach, fishnet and all, and fired three torpedoes at a cargo ship. Two hits tore the victim’s stern. While that ship was sinking, the second cargo ship was also hit, but its fate could not be determined. Patrol boats were closing in as the submarine, probably the only American submarine to make an attack while flying the Japanese flag, quickly left the vicinity. After damaging a freighter and tanker in the same area, Silversides terminated her first war patrol at Pearl Harbor on June 21, 1942.

Beyond the expected and usual depth charging after attacks on ships, there were close escapes. Once, a Japanese airplane dropped three bombs directly on Silversides. The sub survived; although during escape, it went into a hard dive with bow planes jammed, exceeding its design depth. At the last moment, Davenport removed a cotter key, enabling the sub to level off to avoid being crushed.

On another occasion, a torpedo, half stuck in the firing chamber required re-firing. If unsuccessfully re-fired, it could have sunk the sub. Another time, Davenport had to wrestle a pistol from a drunken gunner’s mate who felt that he had been robbed in a dice game. The sailor was removed from the sub in a straitjacket. After four patrols aboard Silverfish, Burlingame recommended him for a command of his own.

Admiral Roy Milton Davenport Was Given Command of the Submarine

When Admiral Robert English relieved the commander of the USS Haddock (SS-231) for circulating “subversive literature” (a poem critical of English and his staff), Davenport was given command of the submarine.

Davenport’s first patrol on the Haddock was also his first action as her commander. On April 3, 1943 off the Palau Islands, Davenport encountered a passenger transport protected by a corvette. The two “fish” launched at the corvette ran under without exploding. Davenport then turned to the passenger transport her with a spread of torpedoes. Following torpedo tracks, the persistent corvette dropped 24 depth charges, many directly over Haddock that caused damage to her conning tower and radar. At a depth of 415 feet, it had almost imploded. To close the hatch to save the boat from sinking, Davenport hit the hatch with a sledgehammer. The conning tower held, and Haddock escaped. Three days later she sank the cargo ship Toyo Maru. After 39 days at sea, Haddock went in for extensive refit to repair a defective conning tower.

On Davenport’s second patrol he returned to the Palaus, where he sank the Saipan Maru on July 21, 1943 and on July 26 fired a total of fifteen Mark XIV torpedoes in four attacks, believing he scored one hit. Credited with one ship sunk and damage to another, he was awarded his first Navy Cross.

In August 1943, Davenport was dispatched to Truk, making a 27-day patrol that would earn him a second Navy Cross. He fired four torpedoes on September 15, claiming two hits and fire aboard the target, which nevertheless tried to ram, leading Davenport to fire two more “down the throat.” On September 20, he encountered the large tanker Tonan Maru II and fired six torpedoes claiming “at least three certain hits.” Several days later he attacked another ship, missing with two torpedoes and on the 23rd, fired his last eight torpedoes at another, claiming three hits.

For his third patrol, he was credited with three ships sunk and his third Navy Cross. In October 1943, he returned to Truk for another 27-day patrol, and on November 2, attacked a freighter and troopship on the surface firing four torpedoes at the freighter and one at the troopship. The freighter was claimed to have sunk immediately, the troopship to have caught fire then settle. The next night, encountering three Japanese destroyers, Davenport fired four torpedoes at one of them claiming a hit mid-ship and a sinking. And finally, on November 6, Haddock found two tankers, firing three bow torpedoes at each and all four stern tubes at the escort. The stern shots all missed, but Davenport reported hits in both tankers. After reloading, he fired two more torpedoes at each, claiming both tankers sunk. The second Truk patrol earned Davenport credit for five ships including the escort, plus damage to another.

Following that patrol, Davenport, “at his own request,” was detached for a rest but returned to duty in May 1944 as the commander of the new USS Trepang (SS-412) where the recipient of three Navy Crosses was credited with sinking five enemy ships.

Setting out from Pearl Harbor for her first war patrol on September 13, 1944, the submarine prowled the waters south of Honshu, the largest and most important of Japan’s home islands. She remained below during daylight hours and came up after dark to get a better view as she recharged her batteries and filled up with fresh air. On the night of September 30, Trepang spotted a fast convoy departing Tokyo Bay. Davenport gave chase and closed in on a group of ships which included two large tankers, a small freighter, and an escort. The submarine fired an overlapping spread of torpedoes which struck the freighter, 750-ton Takunan Maru, and sent her to the bottom.

Davenport weathered a typhoon and, on October 11, attacked his second convoy of two tankers and one escort. Firing four stern tubes, he claimed three hits. No sinkings were confirmed in Japanese records. The next night, he fired four torpedoes at a Japanese landing craft, believing all missed. Postwar, he was credited with Transport 105.

Two days later, the submarine cruised some 12 miles southwest of the entrance to Tokyo Bay during the nighttime. Soon after she came to the surface, and her radar swept the surrounding seas, four pips showed themselves on the phosphorescent screen – two large and two small – which were identified as two battleships and two destroyers.

Despite the fact that the phosphorescent waters would make his submarine stand out starkly in the night, Davenport closed at flank speed and fired a full spread of six torpedoes. The “fish” sped through the water toward their targets. He claimed success when explosions rumbled across the water, and flames lit up the night. Davenport turned the submarine to present her stern tubes to the enemy and loosed four more torpedoes. These all missed.

Davenport’s gallant and skillfully pressed attacks earned him his fourth Navy Cross. He felt that he had damaged a Fuso-class battleship and had sunk a destroyer, but a study of Japanese records after the war did not verify either claim.

The Trepang got underway for its second patrol on November 16, 1944 leading a wolfpack heading for the Philippine Islands leading. The wolfpack included sister ships Segundo (SS-398) and Razorback (SS-394). Since Roy Davenport was the officer in charge of the pack its nickname was “ROY’S RANGERS.”

The weather was dark, windy, and rough on December 6 as Trepang’s conning tower broke the surface after a day’s submerged inshore patrol off Luzon. While shifting course toward deeper water, she detected a group of ships approaching from the northward. Upon closing to investigate, Davenport counted seven large ships and three escorts in the convoy which slowly approached the Philippines.

Davenport radioed news of her “find” to others in the pack then submerged. The submarine shot straight and true, sending freighter Banshu Maru Number 31 and cargo ship Jinyo Maru to the bottom in quick succession and damaging a third vessel, Fukuyo Maru. However, as Trepang came about to administer the coup de grace to Fukuyo Maru, the third cargo ship obligingly blew up and sank. Meanwhile, as Segundo and Razorback arrived on the scene, Trepang fired all of her remaining torpedoes at a fourth ship which, she reported, blew up and sank soon thereafter. However, this fourth sinking was not confirmed by Japanese records. In the meantime, the other two American submarines were trying to finish off the fleeing remnants of the shattered convoy and managed to sink two ships, one with the aid of American naval aircraft. Trepang, now out of torpedoes, sped back to Pearl Harbor, arriving before Christmas. Davenport received his fifth Navy Cross for what would be his last submarine patrol. He was reassigned for shore duty as an instructor at the United States Naval Academy.

Except for those who earned the Medal of Honor, such as Dick O’Kane, he was one of the most highly decorated submariners of the war with his five Navy Crosses and two Silver Stars.