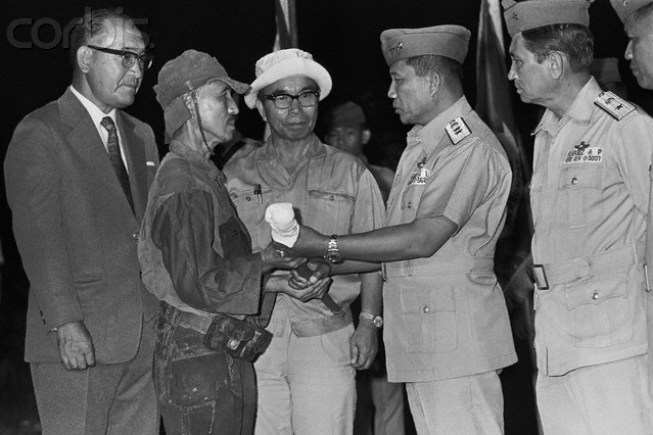 By the summer of 1945, the Japanese navy and air force were destroyed. Its army had been decimated. The Allied naval blockade of Japan and intensive bombing of Japanese cities had left the country and its economy devastated, it’s people suffering.

After the Hiroshima atomic bomb attack, factions of Japan’s supreme war council favored unconditional surrender but the majority resisted. When the second atomic bomb was dropped on Nagasaki, the Japanese Emperor Hirohito told the supreme war council to negotiate the unconditional surrender. To the Japanese his word was that of a god.On Sunday, September 2, 1945, more than 250 Allied warships lay at anchor in Tokyo Bay. Just after 9 a.m. on board the USS Missouri General Douglas MacArthur presided over the official surrender ceremony as Japanese Foreign Minister Mamoru Shigemitsu signed on behalf of the Japanese government. General Yoshijiro Umezu then signed for the Japanese armed forces. His aides wept as he made his signature. The most devastating war in human history was over.

Within days defeated Japanese forces surrendered their arm and returned to their homeland. But not all of them!

Japanese holdouts or stragglers either adamantly doubted the truth of the formal surrender due to strong dogmatic or militaristic principles, or simply were not aware of it because communications had been cut off during the United States island-hopping campaign.

For years after the war was over they continued to fight the enemy forces, and later local police. Some Japanese holdouts volunteered during the First Indochina War and Indonesian War of Independence (our Vietnam War) to free Asian colonies from Western control despite these having once been colonial ambitions of Imperial Japan before and during World War II.

Lt. Hiroo Onoda Was Supposed to Blow Up Bestroy the Lubang Airfield

Among the holdouts was intelligence officer Lt. Hiroo Onada. In 1944, Lt. Onoda was sent by the Japanese Army to the remote Philippine island of Lubang. His mission was to conduct guerrilla warfare against Allied forces. Once on the island, Onoda was supposed to blow up the pier at the harbor and destroy the Lubang airfield.

Unfortunately, the garrison commanders decided not to help Onoda on his mission and soon the island was overrun by the Allies. Most of the Japanese troops on the island withdrew or surrendered. A small number of Japanese, convinced the surrender by the Emperor of Japan was a hoax, retreated into the inner regions of the island and split into small groups to avoid capture. As these groups dwindled in size after several attacks, the remaining soldiers split into cells of 3 and 4 people. There were four people in Onoda’s cell: Corporal Shoichi Shimada (age 30), Private Kinshichi Kozuka (age 24), Private Yuichi Akatsu (age 22), and Lt. Hiroo Onoda (now age 23).

Allied forces made a serious effort to get the holdouts to believe the war was over. Leaflets were dropped over remote jungles and mountains and rescue parties led by former Japanese officers searched the isolated corners of the island. The efforts paid off as small groups trickled from hiding and surrender. Only a few disbelievers remained hidden.

Lt. Hiroo Onoda Found a Leaflet Which Read: “The War Ended on August 15.”

Onoda first saw a leaflet that claimed the war was over and how to surrender in October 1945. When another cell had killed a cow, they found a leaflet left behind by the islanders which read: “The war ended on August 15. Come down from the mountains!” But as they sat in the mountain jungle, the leaflet just didn’t seem to make sense, for another cell had just been fired upon a few days before. If the war were over, why would they still be under attack? No, they decided, the leaflet must be a clever ruse by the Allied propagandists.

Again, the outside world tried to contact the survivors living in the island’s the isolated wilderness by dropping leaflets out of a U.S. Army Air Force Boeing B-17 near the end of 1945.

Printed on these leaflets was the surrender order from General Yamashita of the Fourteenth Area Army. Having already hidden on the island for a year and with the only proof of the end of the war being this leaflet, Onoda and the others scrutinized every letter and every word on this piece of paper concluding it must be an Allied hoax.

Leaflet after leaflet was dropped. Newspapers were left. Photographs and letters from relatives were dropped. Friends and relatives spoke out over loudspeakers. There was always something suspicious, so they never believed that the war had really ended. Year after year, hiding in caves, the four men huddled together in rain, searched for food, and sometimes attacked villagers. Isolated from the rest of the world, everyone appeared to be the enemy.

Tired of near starvation and constantly hiding, Akatsu got away from the others and after six months on his own in the jungle he surrendered in 1949.

In June 1953, Shimada was wounded during a skirmish. Though his leg wound slowly got better (without any medicines or bandages), he became gloomy. On May 7, 1954, Shimada was killed in a skirmish on the beach at Gontin.

For nearly 20 years after Shimad’s death, Kozuka and Onoda continued to live in the jungle ready for the time when they would again be needed by the Japanese army. They believed it was their job to remain behind enemy lines, reconnoiter and gather intelligence to be able to train Japanese troops in guerrilla warfare in order to regain the Philippine islands. In October 1972, at the age of 51 and after 27 years of hiding, Kozuka was killed during a clash with a Filipino patrol. Though Onoda had been officially declared dead in December 1959 Kozuka’s body proved the likelihood that Onoda was still living.

Search parties were sent out to find Onoda, but none succeeded. His own father went to the island trying to coax Onoda to surrender. All alone Onoda continued to hide. Remembering the division commander’s order, he could not kill himself (Hari-kari) yet he no longer had a single soldier to command.

In 1974, a college dropout named Norio Suzuki decided to travel to the Philippines, Malaysia, Singapore, Burma, Nepal, and perhaps a few other countries on his way. He told his friends that he was going to search for Lt. Onoda, a panda, and the Abominable Snowman. Where so many others had failed, Suzuki succeeded. He found Lt. Onoda and tried to convince him that the war was over. Onoda explained that he would only surrender if his commander ordered him to do so.

Onoda was shocked and, at first, did not believe his commander

Suzuki traveled back to Japan and found Onoda’s former commander, Major Taniguchi, who had become a bookseller. On March 9, 1974, Suzuki and Taniguchi met Onoda at a pre-appointed place and Major Taniguchi read the orders that stated all combat activity was to be ceased. Onoda was shocked and, at first, disbelieving. It took some time for the news to sink in.

In his book, “No Surrender: My Thirty-year War” Onoda wrote his feelings the moment he realized it was actually over:”We really lost the war! How could they have been so sloppy? Suddenly everything went black. A storm raged inside me. I felt like a fool for having been so tense and cautious on the way here. Worse than that, what had I been doing for all these years?

Gradually the storm subsided, and for the first time I

really understood: my thirty years as a guerrilla fighter for the Japanese army were abruptly finished. This was the end.I pulled back the bolt on my rifle and unloaded the bullets.

I eased off the pack that I always carried with me and laid the gun on top of it. Would I really have no more use for this rifle that I had polished and cared for like a baby all these years? Or Kozuka’s rifle, which I had hidden in a crevice in the rocks? Had the war really ended thirty years ago? If it had, what had Shimada and Kozuka died for? If what was happening was true, wouldn’t it have been better if I had died with them?” Onoda wept uncontrollably as he agreed to lay down his perfectly serviceable rifle.

Onoda Was Hailed a Hero

During the 30 years that Onoda had remain hidden on Lubang island, he and his men had killed at least 30 Filipinos and had wounded approximately 100 others. After formally surrendering to Philippine President Ferdinand Marcos, Marcos pardoned Onoda for his crimes while in hiding.

When Onoda reached Japan, he was hailed a hero. But his nearly 30 year of living in isolation, hiding from those he believed would harm him, living off the land and watching his men die or desert him, he saw Japan much differently than when he had left it in 1944. He bought a ranch and moved to Brazil but in 1984 he and his new wife moved back to Japan and founded a nature camp for kids.