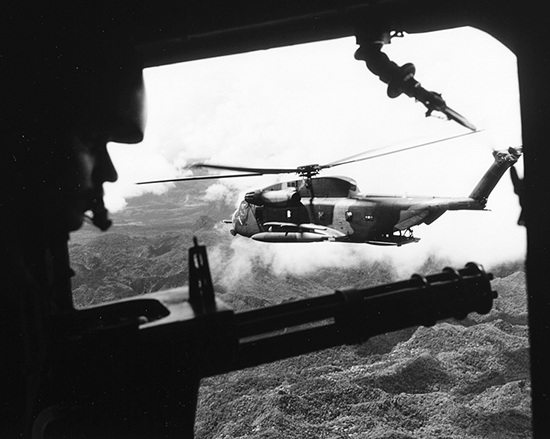 During Operation Bat 21, Hambleton was the Only Survivor.

Midway through the operation, Bat 21 was destroyed by an SA-2 surface-to-air missile, and Hambleton was the only survivor, parachuting behind the front lines into a battlefield filled with thousands of North Vietnamese Army soldiers. The bodies of the aircrew were never found.

Because of Hambleton’s knowledge of Top Secret Strategic Air Command operations and an expert in surface-to-air missile countermeasures, his rescue was crucial. If he was to fall in the hands of the North Vietnamese and then turned over to the Russians, it could result in irreparable damage to American national defense. Thus, it became the “largest, longest, and most complex search-and-rescue” operation during the Vietnam War. It was also one of the costliest. Five additional aircraft were shot down during rescue attempts, directly resulting in the deaths of 11 airmen, the capture of two others, and another airman, Lt. Mark Clark, trying to evade capture. Further air rescue attempts were called off, and the two airmen, traveling separately, were then told that the next attempt would be a land rescue by Navy SEALS up the monsoon-swollen Cam Lo River.

On the night of April 10, 1972, more than a week since Hambleton had been evading enemy capture, Navy SEAL Lt. Thomas R. Norris, leading a handpicked team of five South Vietnamese Lien Doc Nguoi Nhia (LDNN), similar to Navy SEALs, set off down the Cam Lo River in a sampan to get Clark.

Clark’s trip to the pick-up point was a harrowing one. Twice he was almost spotted by North Vietnamese Army (NVA) patrols. At around dawn on the morning of April 11, Clark and Norris linked up, and the sampan sped back down the Cam Lo River to their Forward Operating Base (FOB) and safety.

Shortly after Norris’s sampan returned, the FOB came under attack by a resilient, well-armed NVA unit that was only repulsed after numerous airstrikes were called in. The attack caused several casualties, including the killing of two of the South Vietnamese LDNNs. Two other LDNNs refused to go on any more missions.

April 13th, a Forward Air Controller received a message from Hambleton that he was at the Cam Lo River pickup point. That night Norris and LDNN Petty Officer Nguyen Van Kiet, dressed as local fishermen, got into a sampan and headed upriver.

After several harrowing close calls with NVA troops, they found Hambleton, weak and delirious, but still alive. Quickly they got him into the sampan and hid him under some bamboo. Now it was a race against time to get back before dawn. Twice they were discovered by North Vietnamese troops. The first time they managed to escape downriver before the patrol could fire at them. The second time they found themselves cut off by an enemy unit with a heavy machine gun. Norris radioed for an airstrike. Soon seven aircraft from the USS Hancock arrived on target, killed a number of North Vietnamese troops, and provided cover for Norris and Kiet, allowing them to continue their downriver journey with their high-value cargo.

Hambleton’s ordeal was finally over

Hambleton’s ordeal was finally over.

In photo, Norris is in the center looking on as Hambleton is carried away.

Lt. Norris was recommended for the Medal of Honor. Petty Officer Nguyen Van Kiet received a Navy Cross – the only one ever given to a Vietnamese.

Four months later, in late October 1972, Lt. Thomas R. Norris was on another mission deep behind enemy lines. This time he was leading a team that included SEAL Petty Officer Second Class Michael E. Thornton (left in photo) and three South Vietnamese commandos on a high risk/high reward reconnaissance mission near the Cua Viet River military base that had been captured earlier by the NVA.

Launched in a rubber boat at dusk by a Vietnamese junk, the SEAL patrol silently paddled toward the beach in the gathering darkness. About a mile offshore, the men left their small boat and swam to shore. Then they moved inland, passing silently beside numerous enemy encampments.

They patrolled all through the night, gathering important intelligence. As daybreak approached, seeing no identifiable landmarks, they realized that they had come ashore too far north; in fact, they were in North Vietnam. As they moved back toward the beach, Lieutenant Norris established radio contact with the fleet. Moving further toward their pickup point, they were discovered by the enemy and began to take heavy fire. More than fifty enemy soldiers attacked, closing to within five yards.

Norris and Thornton knew were in a fight for their lives in a tactical situation that could only be described as “a disaster about to get worse.”

Norris was hit in the face, and part of his forehead was shot off, exposing his brain. Ignoring the hail of enemy fire, Thornton raced back to the unconscious Norris, killed two enemy soldiers who were standing over his wounded commander, then hoisted Norris onto his shoulders and sprinted back toward the beach for several hundred yards under heavy enemy fire.

The team retreated to the sea, where Thornton, wounded across his back and legs by a grenade, inflated Norris’s life vest and the vest of one of the commandos, who also had been wounded. After inflating his own vest, Thornton began swimming the two wounded men out to sea for rendezvous with their support craft.

The trio’s ordeal lasted hours. Thornton saw one support craft leave the area after having picked up the South Vietnamese commander, who had swum ahead and informed the crew that he was the only survivor. But a second support craft manned by fellow SEAL Woody Woodruff remained in the area, spotted the trio, and rescued them.

Though it would take numerous operations and years to recuperate, miraculously, Norris survived.

On October 15, 1973, Michael Thornton was on his way to the White House to receive the Medal of Honor from President Richard Nixon.

Lieutenant Norris, still a patient at nearby Bethesda Naval Hospital, had been forbidden by his doctors to go to the ceremony, but Thornton spirited him out the back door of the facility and took him along.

Almost three years later, Norris himself received his Medal of Honor from President Gerald Ford, with Thornton looking on, giving him the distinction of becoming the only Medal of Honor recipient to save the life of a fellow recipient.

The film Bat 21 starring Gene Hackman as Hambleton was a dramatized depiction of Hambleton’s rescue, based on some of the actual events.