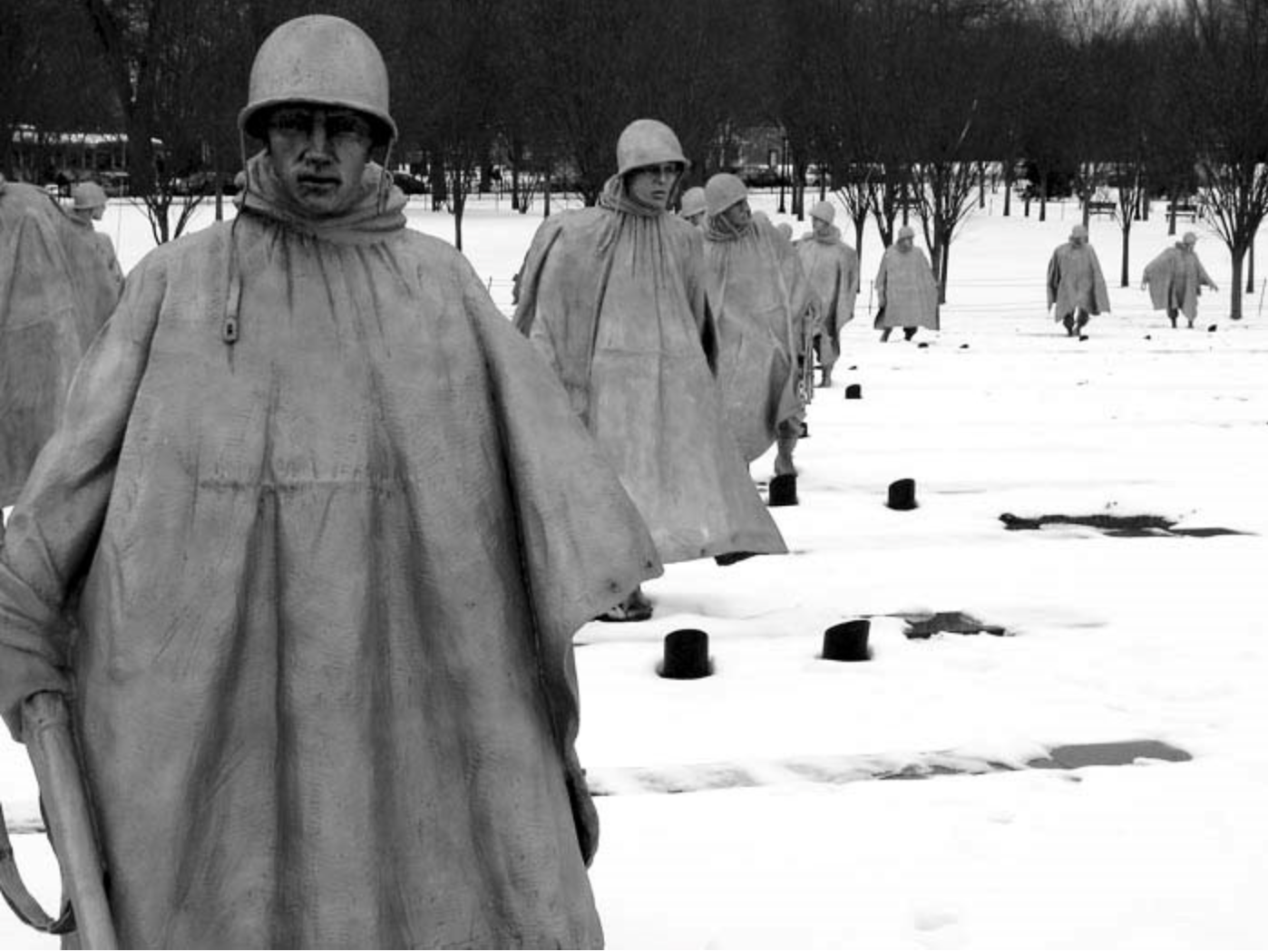 Calling the war in Korea, the “forgotten war” has been part of the American lexicon since 1951. However, why it was called that in the first place is not completely understood.

To understand how the words and, more importantly, how its meaning became part of our national mentality, one must first appreciate the history of what was occurring on the Korean peninsula before, during, and following the war.

Korea was ruled by Japan from 1910 until the closing days of World War II in 1945 when the Allies split the former Japanese colony along the 38th parallel, with the north administered by the Soviet Union and the South by the United States. Over the next few years, the Soviets and the Americans gradually withdrew their forces, and the two Koreas were all but “forgotten” as the world focused on Germany, Eastern Europe, and China’s civil war and revolution.

That all changed the early morning hours on June 25, 1950, when North Korean troops stormed across the 38th parallel and invaded South Korea, catching the greatly outnumbered and ill-equipped South Korea’s forces off guard and throwing them into a hasty southern retreat. American and other Allied troops still located in Korea also withdrew to the south, setting up blocking and delaying positions until they reached the southern tip of the Korean peninsula. The most famous of these blocking stances was Task Force Smith on July 27, 1950, at the Battle of Osan, approximately 20 miles south of Seoul. North Korean troops and tanks eventually overwhelmed American positions, and the remnants of the Task Force retreated in disorder to the south.

The United Nations quickly condemned the invasion and demanded an immediate cessation of hostilities and for North Korea to withdraw its armed forces back above the 38th parallel.

When the North Koreans failed to comply, the U.N. Security Council passed a resolution on June 27, 1950 recommending that its members provide military assistance to South Korea.

Although he did not want to find the United States embroiled in another war, President Harry Truman soon agreed to send American forces into action. On July 7, 1950, the U.N. Security Council recommended that all U.N. forces sent to South Korea be put under U.S. command. The next day, General Douglas MacArthur was named Supreme Commander of all U.N. Forces in Korea.

By early August 1950 the weakened Allies had been pushed all the way back to the Pusan Perimeter, a defensive line around an area in the southeastern corner of the Korean peninsula. Throughout August and into September, the Americans and their counterparts fought off attack after attack from the North Koreans, barely preventing them from advancing any further. The first reinforcement to arrive by ship in the Pusan Harbor where the Army First Cavalry Division and U.S. Marines stationed in Japan. Other U.N. troops arrived as well, allowing the Allies to take the offensive.

Wanting to crush North Korean forces not only near Pusan but elsewhere in South Korea, MacArthur devised an audacious plan to land troops behind the enemy lines at Inchon – about 100 miles south of the 38th parallel and 25 miles northwest from Seoul. In that way, his forces could attack the North Koreans from both directions.

Initially, MacArthur’s proposal met with resistance when other senior American military leaders – mostly Navy officers – criticized the plan as too risky, pointing to a variety of challenges associated with landing at Inchon, including the narrow port-channel and extreme tidal changes. MacArthur argued that these factors would mean the North Koreans wouldn’t expect the Allies to attempt an amphibious landing at the poorly defended Inchon.

MacArthur received the official go-ahead for the Inchon landing, and beginning on September 15, 1950, American-led U.N. forces converged on the North Korean army from the north and the south, killing or capturing thousands North Korean soldiers and disrupting their supply lines. All along the Korean peninsula, the now disorganized units of the North Korean army were trying to hold on while others quickly retreated back over the 38th parallel.

General Douglas MacArthur ordered troops to pursue the retreating North Koreans further into North Korea while sending other U.N. force southeast and to recapture Seoul, which they succeeded to do by September 26, 1950, following bitter, deadly house-to-house fighting.

By early October 1950, American and South Korean forces advanced deep into North Korea, destroying North Koreans units and sending them further into retreat toward the Yalu River, which separates North Korea from Communist China. On October 19, the North Korean capital of Pyongyang was captured.

McArthur then pushed American troops further north toward the Yalu River. Chinese leaders threatened to intervene in the conflict if U.N. forces continued north or crossed the border into China. McArthur felt confident the Chinese were bluffing and would never enter the war. It was a miscalculation that ultimately helped get him fired by Truman.

In brutal freezing cold-weather fighting, the outnumbered U.N. forces, surrounded by North Koreans and Chinese, began withdrawing from the Chosin Reservoir and other footholds along the further stretches of North Korea. The complete breakout from the Chosin Reservoir took a few weeks before some U.N. forces reached Hungnam’s port facilities and evacuated by ships. Other badly depleted U.N. forces rapidly retreated towards the 38th parallel.

In early January 1951, the Communists recaptured Seoul, only to have the Allies reoccupy it again in March. By May 1951, the communists were pushed back to the 38th parallel, and the battle line remained in that vicinity for the rest of the war as the U.S. and North Korean armistice negotiators, neither willing to surrender an inch of bloody worthless frozen ground, took their own sweet time dawdling in the comfort of a heated “peace tent” at the abandoned village of Panmunjom.

On July 27, 1953, after two years of bitter back and forth negotiation and three years of war that killed about 600,000 soldiers on both sides and as many as 2 million civilians, military leaders from China, North Korea, and the United Nations signed an armistice that ended the fighting and established a 2.5-mile-wide demilitarized zone to serve as a buffer between the two Koreas.

Korea remains divided along the 38th parallel with North and South Korea still making threats against each other, raising nuclear-tipped spears, conducting “training exercises” and firing “stray rounds.” Every day, communist and anticommunist forces – including Americans – stare each other down across no man’s land and conduct reconnaissance and security patrols along the most heavily fortified space in the world. Nearly every day, the media reminds us about the tensions between the two Koreas, which are perhaps worse today than when the U.N. sent troops there 62 years ago.

Isolated North Korea continues to be ruled by a one-family dictatorship currently led by its erratic and immature Supreme Leader Kim Jong-un, who and in the tradition of his father and grandfather, uses the nations meager resources on military might. In contrast, his enslaved people continue to starve to death.

South Korea, however, has grown into the eight wealthiest nation in the world, and Seoul’s quality of life in 2013 was found to be higher than that of New York City, London, or Melbourne but slightly lower than Tokyo and Paris.

So why is the Korean War Korea still referred to as a “police action,” “the Korean conflict,” and “the forgotten war,” when in fact, it was inescapably a real, hard slugging, miserable war where millions died and many more suffered from the hostilities? And why in spite of its significance of being the first shooting war of the Cold War, pitting democracy to communism?

Here are some of the reasons given for why it gained the label “the forgotten war” and continues to be referred to in that manner by many.

Nestled snugly between the storied glory of the last “good war” – Second World War and that twelve-year nightmare known as Vietnam – the Korean War is mostly forgotten because very little was accomplished according to some. They point out that neither side won nor did they lose it since they never signed a permanent peace treaty, so both sides are technically still at war.

Another theory goes something like this: it was fought in a remote, backward country of no vital, strategic interest, and it ended in a deadlock “the kiss of death for national pride and war memory. What contradicts that idea, however,

is the Korean War Veterans Memorial dedicate to the spirit, sacrifice, and commitment of the men and women who served during the Korean War.

Dedicate on July 27, 1995, the 42nd anniversary of the armistice that ended the war; it is in Washington, D.C.’s West Potomac Park, southeast of the Lincoln Memorial and just south of the Reflecting Pool on the National Mall. There are 38 infantrymen statues scattered across an open field to symbolize the 38th parallel. Perhaps the one theory that makes some sense on how the forgotten war idea came into being was put forth by Melinda Pash in her book “In the Shadow of the Greatest Generation: The Americans Who Fought the Korean War,” which examines this significant but neglected war.

She wrote: Korea has been called a “Forgotten War” since at least October 1951 when U.S. News & World Report gave it that moniker. In reality, Americans did not so much forget the Korean War as never having thought about it at all. When the war first broke out, people worried that American involvement would usher in the same type of rationing and full mobilization that had characterized World War II. That failed to occur, and within a few months, most Americans turned back to their own lives, ignoring the conflict raging half a world away.

Newspapers continued to report on the war, but with the entrance of the Chinese in late fall 1950 and the resulting stalemate in late 1951, few Americans wanted to read or think about Korea despite the nearly two million Americans serving in Korea.

No doubt, many of our citizens – mostly because it is so well entrenched in our psyche – will continue to “forget” or ignore the Korean War and its veterans. Yet on so many levels, this shows general disrespect for those American patriots who bravely fought in a bitter Vietnam war where 54,246 died, and another 103,254 were injured. Then, of course, there are the 7,140 POWs and the 8,117 U.S. troops still officially missing in action. Don’t families of those who died deserve the honor of knowing their loved one died in a real war and not a forgotten one?