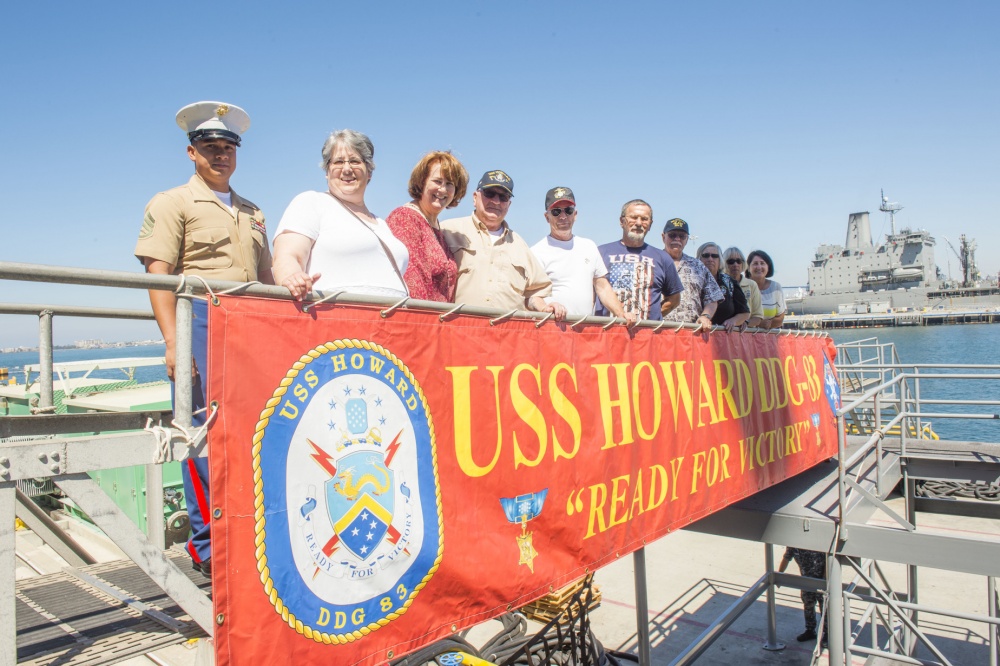 During the Vietnam War, one of the 1st Marine Division’s primary area of operation was the southern two provinces of I Corps – Quang Tin and Quang Ngai, located in the southern portion of South Vietnam’s I Corps Military Region. Astride the boundary between Quang Nam and Quang Tin provinces is the populous, rice-rich Que Son Valley, considered as strategically important in controlling South Vietnam’s five northern provinces. For that reason, it was a principal focus for the Marines in I Corps.

To gain more immediate and timely eyes-on intelligence on the reported movements, seven recon teams from the 1st Reconnaissance Battalion were sent out to ring the large valley. If enemy’s positions were located, the teams were to call in artillery and airstrikes against them. Among the seven teams was Team Two, consisting of 16 Marines and two Navy Corpsmen led by Staff Sgt. Jimmie Howard, a former drill instructor and battle-tested veteran with 16-years in the Corps. In the photo, Howard is top row, third from left.

Born in July 1929 in Burlington, Iowa, Howard attended the University of Iowa for a year before enlisting in the Marine Corps in July 1950. In February 1952, Howard, then a Corporal, was sent to Korea and assigned duty as a forward observer with the 4.2-inch Mortar Company, 1st Marines 1st Marine Division. At the time, the division was part of a United Nations line defending a 35-mile line that encompassed the Pyongyang to Seoul corridor. Much of the fighting revolved around holding and retaking various combat outposts along with key pieces of terrain.

Attached to a forward rife company sitting atop a critical outpost along this line, Howard was positioned in a spot where he could better call in defensive fires on the enemy. When a large, determined enemy force tried to overrun the outpost, Howard’s location made him a perfect target for the advancing enemy. Yet, he held his position, calling in critical fire missions. Still, the enemy kept coming despite growing casualties, and when some of the enemy made it through the perimeter near his location, Howard and others battled them in close hand-to-hand combat. During the height of the battle, he was knocked unconscious by an enemy mortar shell, but as soon as he recovered consciousness, continued calling in life-saving fire missions. Later he was again knocked unconscious and was forced to be evacuated. For this action, he was awarded the Silver Star medal and his second Purple Heart. His next war was 14-years later in the jungles of Vietnam.

On the evening of June 13, 1966, as the waning sun dropped behind the western horizon, UH-34 helicopters moved quickly to the top of Hill 488 (Nui Vu hill) just 25 miles west of Chu Lai. Staff Sgt. Howard and his fifteen Marines and two Navy Corpsmen were inserted, and the helicopters hurriedly lifted off and headed home to Chu Lai.

For two days, Howard and his men watched for enemy troop movements in the valley below and called in artillery and airstrikes on those they spotted. Hardly the fools, the enemy figured there had to be someone in the area watching them, directing fire upon their every move. Hoping to find the American spotters, NVA patrols fanned out, checking the hills surrounding the valley. It is unknown if an enemy patrol spotted Howard’s team, but chances are they did, which explained the large force send to eliminate them. The photo shows Daniel Mulvihill calling in a fire mission.

Several UH-34 Helicopters Were Launched, But as They Were Close to Hill 488

By the third day, based on aerial reconnaissance, Howard’s Battalion Commander Lt. Col. A. J. Sullivan began to sense the danger the small recon patrol faced and offered to pull them out. Howard believed he could hold out one more day and requested permission to remain on the hill, citing a good escape route to the east. His request was granted. Shortly thereafter, word reached Chu Lai that a full NVA battalion of 200-350 well-trained soldiers was moving on Hill 488. Sullivan radioed that information to Howard, who requested immediate extraction. Several UH-34 helicopters were launched, but as they were close to Hill 488, they came under immediate attack from machine gun fires, forcing them to return to Chu Lai. Sullivan relayed the bad news back to Howard that they would not be able to be extracted until daylight. Somehow they would have to survive the night against a force outnumbering them by 20-to-1. It was June 15, 1966.

Howard placed all of his Marines in strategic positions around the summit of the almost barren hilltop, with orders to pull back into a tight perimeter the moment the enemy struck. That moment came at 10 PM, only 12 feet from one of the Marine defenders. As the enemy swarmed the hill amid gunfire, grenades, mortars, and support from four .50-caliber machine-guns, Howard pulled back his men into a tight circle, only 20 yards in diameter. Back-to-back they defended their small perimeter, counting on each other to work as a team to do the impossible. Howard moved among his men, encouraging them, directing their fire, and shoring up the weaknesses in the perimeter. For most of his Marines, it was their first major test of combat. Huddled in the darkness amid the deafening explosion of grenades and mortars and the dark sky filled with tracer rounds, it was Howard’s reassuring words that calmed them down and his strong leadership that inspired them to fight on, often in hand-to-hand combat. Then quiet engulfed the hill as the enemy pulled back, their fanatical human wave assault initially repulsed.

Howard looked around him. Every one of his young Marines and both Corpsmen had been wounded in the initial attack. Several were dead. Howard knew the quiet wouldn’t last long; that the enemy was regrouping for another attack. He surveyed what remained of his Marines and found that ammunition was desperately running low. His men who were out of ammunition picked up AK-47s and ammo belts from dead NVA. The grenades were gone, expended to push back the first wave of the assault. So Howard issued one of the most unusual combat orders in recent history, “Throw rocks!”

As incredible as the order sounded, it worked. When the enemy soldiers began to push their way through the sparse brush and knee-high grass to probe the perimeter, Howard’s men threw rocks at them. Mistaking the rocks for grenades, the enemy soldiers would move quickly into the open, allowing the defenders clear shots that made every round of remaining ammunition count.

For five hours, the enemy alternated between small probes and a full-scale assault on the surviving Marines. Howard continued to encourage his battered platoon, direct their fire, and calling in aerial support. At times the enemy was so close that Howard directed aerial strafing runs within 30 feet of their position. From Chu Lai, Sullivan listened to Howard’s calm, precise voice across the radio. Then, shortly after 3 AM, the radio went dead (reason unknown). At the Command Operation Center, there was dread, the assumption being that Howard was dead and his brave platoon wiped out.

The Battle of Hill 488 Wasn’t Yet Over

Howard wasn’t dead, but he was wounded and couldn’t move his legs. During one of the enemy attacks, his lower back and legs were sprayed with shrapnel shards from exploding grenades. As the enemy continued to assault his perimeter, the wounded leader did his best to encourage his Marines. He kept reminding them that if they could just hold out until daylight, more Marines would come and pull them out of there.

As daylight dawned, a helicopter approached the hill. The Marines were still taking fire; the battle wasn’t yet over. The chopper was shot down and the pilot, Maj. William J. Goodsell was killed.

At dawn, a Marine rifle company began the trek to relieve the remnants of Howard’s platoon. Company C of 1st Battalion, 5th Marine Regiment, landed at the base of Hill 488 and forced their way up the small mountain through scattered but strong resistance to reach Howard and his recon team. Two 1/5 Marines were killed, and it wasn’t until noon that they finally reached Howard’s perimeter. Five of the defenders on Hill 488 were dead. A sixth died en route to the base camp at Chu Lai. When finally the rescue effort reached Howard and his men, among the 12 survivors, there remained only eight rounds of ammunition.

On August 21, 1967, at the White House, Gunnery Sgt. Jimmie E. Howard stood proudly at attention next to his wife and six children. Following the reading of his heroic action at Hill 488, President Lyndon B. Johnson carefully placed the Medal of Honor around the neck of an incredible leader and true American hero. With tears in his eyes, the grizzled Marine then stepped to the microphone to give the credit to his 15 brave Marines and 2 Navy Corpsmen.

And they were there, all eleven survivors of that unbelievable night of horror and courage at Hill 488. After speaking briefly, Howard took the President by the hand and led him to the edge of the stage where he introduced him to each and every one of the men he had led that night, and to whom he felt the Medal of Honor belonged more than it did to himself.

Rewarding Team Members at The Battle of Hill 488

On November 12, 1993, Jimmie Howard passed away at his home in San Diego. He is buried at the Fort Rosecrans National Cemetery near the Marine Corps Recruiting Depot, where years before he served as a Marine Drill Instructor.

In honor of Howard’s 27 years of dedicated service to the U.S. Marine Corps, the United States of America, and his unwavering leadership and courage, the U.S. Navy on October 20, 2001, christened the thirty-third Arleigh Burke-class destroyer in his honor, the USS Howard (DDG-83).

Every time it sets to sea from its homeport of San Diego, it passes within view of Gunnery Sgt. Howard’s grave at Fort Rosecrans National Cemetery and salutes its namesake.