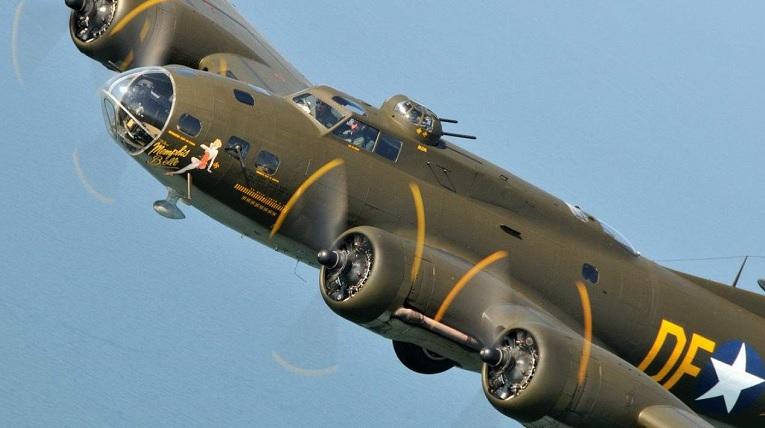 1917, and 1918, the United States government issued Liberty Bonds to raise money for our involvement in World War I. By the summer of 1940 when it appeared the United States would be drawn into World War II, bonds again were being sold as a way to remove money from circulation as well as reduce inflation. After the Japanese attacked Pearl Harbor on December 7, 1941, the bonds became known at War Bonds.

To promote selling the War Bonds, rallies were held throughout the country with famous celebrities, usually Hollywood film stars, sports personalities, and war heroes such as John Basilone and Audie Murphy. Famous American artists, including Norman Rockwell, created a series of illustrations that became the centerpiece of war bond advertising.

Although the U.S. Army Air Force sent its individual war heroes to War Bond rallies, it preferred sending 10-man heavy bombers crews. That because the American public knew heavy bomber crews faced death on every mission with only one in four chance of actually completing their tour of duty; that’s an average life expectancy of only eight weeks. So dangerous was flying heavy bomber combat missions, the USAAF had a policy that when an aircrew wrapped up 25 missions, it was deemed to have “completed their tour of duty.” The War Department would then bring the bomber and its crew home to conduct nationwide promotional tours to sell war bonds to help fund the war effort.

According to decades of World War II aviation history, the crew of the “Memphis Belle” became the first B-17F Flying Fortress crew to complete 25 missions following a strike against Kiel, Germany. She and her crew were promptly sent home to the United States to join the War Bond selling tours.

A 1944 documentary film was produced detailing its exploits, and in 1990, a Hollywood feature film entitled the “Memphis Belle” perpetuated its glory for decades. The problem was, the “Memphis Belle was not the first heavy bomber to survive 25 combat missions. Nor was she the second. She was the third.

The first to complete 25 combat missions was the crew of B-24 Liberator named “Hot Stuff” dropping bombs on Naples, Italy on February 7, 1943 – three-and-a-half months before “Memphis Belle” flew her 25th mission. “Hot Stuff” and her crew went on to fly five additional missions before she and her crew were recalled to the United States, where they were scheduled to go on a War Bonds Tour.

In early May 1943 as the crew prepared for their flight to the States for their War Bonds publicity tour, they got a call from the office of Lt. General Frank M. Andrews, Commander of the European Theater of Operations, asking if he could hitch a ride back to the States. Andrews, an experienced, instrument-rated pilot, bumped the normal co-pilot off the plane and flew in his place. Also aboard were Andrews’ staff and four clergymen. Five other crewmen were bumped to make room for Andrews and his entourage.

The first refueling stop before heading out over the Atlantic was scheduled for Prestwick, Scotland, but the crew decided to fly directly to their second refueling stop at Reykjavik, Iceland. Closing in of Reykjavik, they ran into snow squalls, low clouds, and rain. After several landing attempts, “Hot Stuff” crashed into the side of 1,600-foot-tall Mount Fagradalsfjall, near Grindavik, Iceland. Upon impact, the aircraft disintegrated except for the tail gunner’s turret, which remained relatively intact. Of the 15 aboard, 14 died. Miraculously the injured tail-gunner, Sgt. George Eisel survived the crash. Because his leg got tangled up in heavy wreckage, he couldn’t move. Twenty-four hours later, he was rescued and the bodies recovered.

In 1945 Camp Springs Air Base in Prince Georges County, Maryland, was renamed Andrews Field in Gen. Andrews honor. It has since been renamed Joint Base Andrews.

The “Hot Stuff” and her crew were soon forgotten. “Hell’s Angels” a B-17F Flying Fortress became the first 8th Air Force B-17 to complete 25 combat missions in June 1943. At the end of their tour, the crew of “Hell’s Angels” signed on for a second tour and continued to fly, going on to fly 48 missions, without ever turning back from their assigned target. The aircraft was returned to the states on January 20, 1944, for its own publicity tour.

“Hot Stuff” was the first B-24 crew and the first heavy bomber to complete 25 combat missions on February 7, 1943.

Coming it third place was the “Memphis Belle,” which completed 25 combat missions on May 19, 1943. (Photo is a jubilant “Memphis Belle” crew following their 25-mission)

So why did the U.S. Army Air Force promote the “Memphis Belle” as the first heavy bomber to fly 25 combat missions?

According to Warbird News, our government was anxious to report uplifting and inspiring stories of the war that would capture the American public’s imagination. For the USAAF it was heavy bombers crews that successfully reached 25 combat mission in defiance of actuarial norms.

“Memphis Belle” Hit That Momentous Milestone Without a Crewman’s Death

Because the “Memphis Belle” hit that momentous milestone without a crewman’s death made her the likely candidate to be first to return home for a War Bond tour.

Americans, for better or worse are conditioned to respond to a happy ending, especially when it goes against all probability.