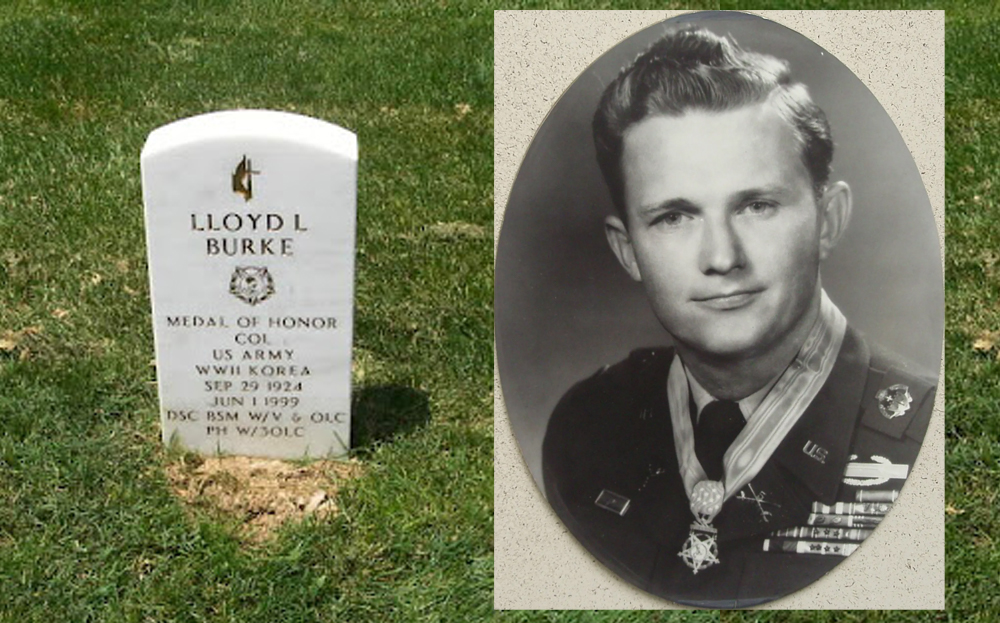 Lloyd L. “Scooter” Burke – the most highly decorated soldier in Arkansas’ history – was born in Tichnor (Arkansas County) on September 29, 1924, one of five children of A. D. Burke, a foreman at a lumber mill in Clarendon (Monroe County) and his wife, Belly Burke. In 1942, Lloyd Burke graduated from Stuttgart High School and enrolled at Henderson State Teachers College, now Henderson State University.

In 1943 when Burke was 18-years-old, he dropped out of Henderson State College and joined the United States Army. He served two years during World War II as a sergeant with combat engineers in Italy.

After the war, he returned to school at Henderson, where he participated in the Reserve Officers’ Training Corps (ROTC) program, which is now named “Burke’s Raiders” in his memory. He was also a member of the Phi Sigma Epsilon fraternity. In 1950, he graduated as a Distinguished Military Graduate.

After graduation, Burke was commissioned a second lieutenant in June 1950. That same month, on June 25, 1950, at 4 a.m. on a rainy Sunday morning, Democratic People’s Republic of Korea Army (DPRK – North Korea) artillery and mortars open fire on Republic of Korea (ROK – South Korea) Army positions south of the 38th Parallel, the line then serving as the border between the two countries. The opening barrage is followed shortly by tank/infantry attacks at all points along the Parallel. At 11 a.m. North Korea announced a formal declaration of war, and what is now known as “The Korean War” officially began.

This invasion was the first military action of the Cold War. By July, American troops had entered the war on South Korea’s behalf. As far as American officials were concerned, it was a war against the forces of international communism itself.

In November 1950, five months after the war began, Burke was shipped to Korea, where he was commander of Company G, 2nd Battalion 5th Cavalry Regiment. That same month, Chinese forces crossed the Yalu River. In response, Gen. Douglas MacArthur ordered the 1st Cavalry Division to participate in a massive counteroffensive that began on November 24, 1950, with Burke’s regiment playing a major role.

On November 26, 1950, Burke’s Company F was moving toward Sunchon, Korea, when contact was made with a strong enemy force that had infiltrated friendly lines and established a roadblock. His battalion commander ordered him to secure a commanding ridge defended by a well-entrenched enemy force. Burke quickly organized his men, moved to the head of the column, and personally led an attack against the enemy position. But blazing fire from the enemy forced Burke’s company to fall back.

Determined to accomplish the mission given him by his battalion commander, Burke refused to give up. He repeatedly rallied his men and led them against the death-spitting ridge, but each time they were forced to fall back because of the withering fire that was killing and wounding his men. Burke reassessed the enemy situation and began looking for the enemy machine-gun position that was the major stumbling block in the attack. Once he determined the gun’s location, he crawled forward, heedless of the heavy volume of enemy fire that chewed and churned the dirt around him until he was within grenade range. Despite the murderous fire now being directed at him, he accurately lobbed several grenades into the machine-gun nest, completely obliterating it. Having eliminated this obstacle, he dauntlessly arose and valiantly led his inspired men in a fifth furious assault on the ridge and successfully secured it. For his gallantry, aggressive leadership, and unwavering courage and determination, Burke received the Distinguished Service Cross, America’s second-highest award for heroism.

For the next ten months, the 5th Regiments and Burke’s company participated in many battles, some small, others large. During these battles, Burke again showed extraordinary heroism in which he was awarded a Silver Star, two Bronze Stars for valor, and four Purple Hearts.

Burke’s tour of duty was almost over in October 1951. At the time, Burke was found at the rear of his regiment. He had a plane ticket in his pocket and was eager to see his wife and infant son. Two miles away, Burke’s company was attempting to cross the Yokkok-chon River. The company was hindered by a large and well-entrenched Chinese force on Hill 200. The battle enraged for days as the 2nd Battalion’s attacks were constantly being repelled. At first, Burke kept up with the reports. Eventually, he no longer tolerated what was going on and decided to enter the front lines. As he himself stated, “I couldn’t see leaving my guys up there without trying to do something.”

When Burke was at the base of Hill 200, he was shocked to witness his company’s strength mitigated to thirty-five traumatized survivors. Burke described the condition of his company clearly: “These men were completely beat. They lay huddled in foxholes, unable to move. They all had the thousand-yard stare of men who’d seen too much fighting, too much death.” Burke dragged up a 57 mm recoilless rifle and shot three rounds at the closest enemy bunker. The bunker itself was a wooden-fronted structure covering a cave, which was dug into the overall hillside. The Chinese attacked American troops by hurling grenades from their trenches. Burke aimed his M1 rifle at the trench line and shot at every Chinese soldier that rose to throw a grenade. Unfortunately, the grenades were still being thrown. After having used an eight-round clip, Burke decided to take more drastic measures. As he recalled, “I considered myself a pretty fair shot, but this was getting ridiculous. I had to do something.”

After laying down his rifle, Burke took a grenade and ran approximately thirty yards to the Chinese trench line. He avoided enemy fire by hurling himself at the base of a dirt berm that was two feet high. When the Chinese momentarily stopped firing, Burke jumped into one of the trenches with a pistol in one hand and a grenade in the other. He shot five or six Chinese soldiers in the forehead. Burke also fired at two Chinese soldiers from further down the trench. Afterward, he threw his grenade in their direction, jumped out of the trench, and placed himself against the dirt berm. The Chinese were aware of Burke’s location and began throwing grenades at his position. Most of the grenades thrown rolled down the hill and harmlessly exploded. Some of the grenades, however, did explode nearby Burke’s position. Burke himself managed to catch three grenades and tossed them back at the Chinese. At the same time, troops from Burke’s company threw grenades, some of which did not reach their Chinese targets and exploded in close proximity to Burke’s position. Burke abandoned the dirt berm by crawling off to the side where he found cover in a gully. The gully itself ended further up Hill 200 at a Korean burial mound.

After having edged his way up the hill, Burke peeked over the top of the burial mound. He witnessed the main Chinese trench, which was approximately 100 yards away from his position. The trench was covered in enfilade, was curved around the hill, and contained a myriad of Chinese troops. Surprisingly, the Chinese were in a state of ease as some of the soldiers talked, sat, and laughed while other units were throwing grenades and firing mortars. Burke went down the gully to Company G’s position and told Sergeant Arthur Foster, the senior NCO, “Get’em ready to attack when I give you the signal!”

Burke then dragged the last functioning machine gun along with three cans of ammunition back up the hill. On top of the burial mound, he set up his tripod, mounted his machine gun, set the screw to free traverse, and prepared his 250-round ammunition box. He began firing at the nearest part of the Chinese trench, where the mortars were located. After Burke shot at all of the Chinese mortar squads, he then fired upon a machine gun emplacement. Afterward, Burke fired up and down the trench, with the Chinese too shocked to react. Eventually, the Chinese fled down the trench in a panic. Burke continued to fire until his Browning was jammed. While he attempted to clear his weapon, an enemy started throwing grenades at his position. Burke not only ignored the enemy unit, but he also ignored the grenade fragments that tore open the back of his hand. Eventually, Burke was able to clear his weapon and kill the Chinese grenadier.

Meanwhile, Sergeant Foster was leading a small group to Burke’s location and was summoned by Burke to provide extra firepower. Burke and company were convinced that they were under siege from a full-sized force instead of a few adamant skirmishers. As the Chinese retreated, Burke wrapped his field jacket around the machine gun’s hot barrel sleeve and tore the 31-pound weapon off its tripod. He then wrapped the ammunition belt around his body, walked towards the trench, and fired upon retreating units. Naturally, Sergeant Foster and his men followed Burke. When Burke depleted his ammunition, he used his .45 automatic and grenades in order to clear out bunkers.

At Hill 200, Lloyd Burke Managed to Kill Over One-Hundred Men

At Hill 200, Burke managed to kill over one-hundred men, decimate two mortar emplacements, and three machine-gun nests. For his actions, he was awarded the Medal of Honor at a White House ceremony on April 11, 1952.

Burke also served during the Vietnam War until a helicopter he was flying in was shot down. This, in turn, forced him to return to the United States and undergo hospitalization for a long period of time. Overall, he spent thirty-five years in the US Armed Forces, served as the Army’s Liaison Officer to the United States Congress, and retired with the rank of full Colonel in 1978.

Burke’s first marriage to Virginia Fletcher Burke, ended in divorce. They had three children. His second wife Maxine, preceded him in death.

Burke suffered a massive heart attack and died at his home on June 1, 1999. He is buried at the Arlington National Cemetery Plot: Section 7A, Grave 155, and Map Grid U-23.5.