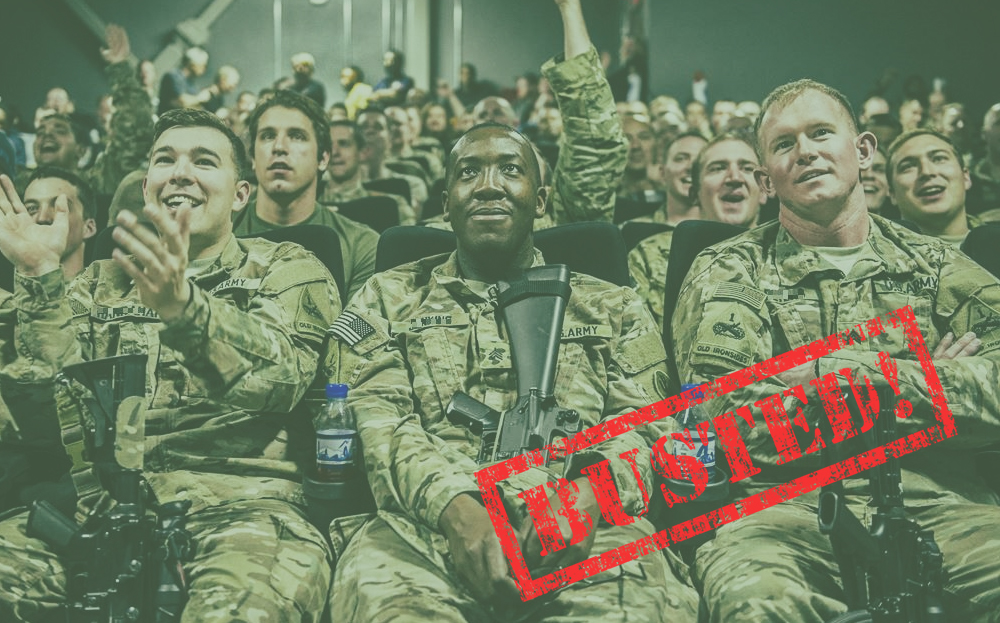 There are many misconceptions and myths about the military floating around out there. Here are five common myths busted.

If you get in trouble with the law, then your only option is the military. Ever heard the old saying, “Go to Jail or Go to the Military.”

Can a criminal court judge sentence a person to military service as an alternative to jail?

Can a prosecutor mandate that someone joins the military as an alternative to criminal prosecution?

Well, a judge or prosecutor can do whatever they please (within the limits of the law for their jurisdiction), but that doesn’t mean the military branches are required to accept such people, and they don’t.

The military actually has to know about any run-ins with the law, no matter how minor. All branches of the military-run FBI background checks on all prospective members. However, just because you have a glitch in your past doesn’t necessarily mean you can’t join the military. Commanders can authorize waivers for certain offenses, although approved waivers will make some jobs unavailable.

The military’s benefits and pay are not competitive with the civilian world.

Attracting and keeping high-quality personnel has been a challenge for military services during much of the past decade. In response to growing concerns about military readiness and missed recruiting goals, and recognizing that compensation plays an important part in career decision-making, Congress recently approved significant increases in military pay.

Women have a hard time achieving success in the military.

Women in the armed forces are wearing one, two, and three stars on their shoulders and are serving at the highest levels of command. They are more than the equivalent of a corporate CEO or company president and have responsibilities for millions of dollars and thousands of people.

Reaching for the stars in the military is not an easy goal to pursue. It requires a college education, attendance at military staff and command schools, advanced studies, and many years of service. But it is not a closed-door anymore. Now young women who are thinking about a military career can follow their dreams all the way to the stars – and beyond.

Over fifty women in the military wear the stars of an admiral or general, and more have been selected to pin them on next year – a small number indeed but a big step since there were none prior to 1970.

Military training and jobs have little relation to the civilian world.

About 80 percent of the jobs in the military are non-combat occupations with direct civilian counterparts. With related skills learned and practiced in military positions, many civilian companies hire military veterans for their work ethic, dedication, and leadership skills to fill key positions within their companies.

Going to the military right out of high school means you will not get a college education.

Although most high school students have good intentions about going to college, many have not come to the reality of how they are going to pay for college. The military fixes this problem. Not only does the military pay up to 100 percent of college tuition while you serve on active duty, but the military also offers the GI Bill (about $36,000) to use for college up to 10 years after leaving the service.

Each service has specific voluntary education programs unique to that service, and much of the training obtained in the military is college accredited.

These are just five of the many myths out there about the military. People with good intentions who just don’t know any better often start many myths.