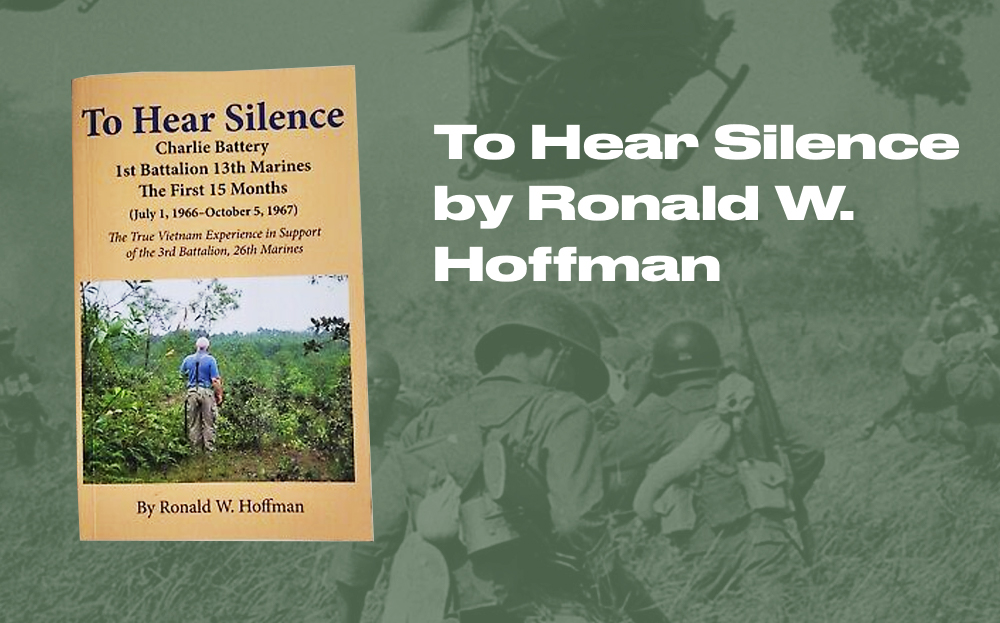 Five years ago, the author returned to Vietnam on a battlefield tour with his wife, Nancy. In a conversation with the guide, Bill Stilwagen, he mentioned how his unit had accomplished a lot in its first 13 months in-country, yet when he looked on the internet, he couldn’t find anything. Stilwagen challenged him by saying, “Why don’t you write a book about it?” Hoffman took the challenge seriously.

Upon returning home, he immediately set out to write a true account of Charlie Battery, 1st Battalion, 13th Marines from the time when first formed at Camp Horno, CA, in July 1966 until the original men left Khe Sanh, Vietnam in October 1967.

Relying on a diary he kept, along with a mountain of research he compiled from declassified documents and information he gained by interviewing some of the men in the Battery, Hoffman started typing. Four years later, he completed his book, “To Hear Silence.”

The book covers his 15 months with Charlie Battery starting with the training at Camp Horno and how a bunch of untrained Marines were taken through the paces for eight weeks and the progress they made and the confidence they gained. This was followed by trips to the Philippines for more hands-on training. On one trip, their ship ran into Typhoon Ida – the worst typhoon in the area for 20 years. Riding out the 100-foot swells and maneuvering the 200-miles-per-hours winds made for a lot of seasick and scared Marines. Then it was off to Okinawa, where they boarded ships carrying them to Vietnam. On December 11, 1966, they reach the shores of Vietnam to begin an adventure none will ever forget.

Most of what Hoffman writes tells of the battles these brave young men fought both in their personal lives and in combat. These Marines fought through some of the harshest conditions of the war. From living in the field during the monsoonal rains to hacking their way through 10-foot razor-sharp grass in 100-plus-degrees temperatures. It was his time as a Forward Observer with Marine line units where he digs deep into his own emotions.

Hoffman provides great details on the many battles and attacks experienced during Charlie Battery’s 13 months of combat in which four men were killed and many others wounded.

He reminds the reader often on how these men stayed focused on trying to bring freedom to the Vietnamese people in spite of the hardships and the ever-present homesickness in a land of strange odors, bugs, snakes, leeches, c-rations, and constant danger.

In a recent interview, Hoffman recalls his feelings as he stood looking out at the Khe Sanh battlefield on his return five years before. He said, ‘There’s a lot of different silences in the world, and one of them is looking at an old battlefield. For my wife, she was looking at a field; for me, I could see the guns, the things going on there, we were like still there.”

In his research for his book, Hoffman discovered at least 42 from his unit are dead, most, because of Agent Orange. Hoffman himself has battled prostate cancer.

He’s hoping his book inspires fellow Vietnam vets to take the time to write some of their thoughts, feelings, and what it was like to have been in combat before the memories are gone.

Recommend this book to all veterans, especially those marine and soldier ‘grunts,” whose lives were undoubtedly saved by the artillery support they received when the fighting got the toughest. Charlie Battery was there when artillery was most needed, and according to Hoffman, they had 756 confirmed enemy kills and an unknown number who died from their wounds.

Ron dedicated his book to all the men he fought beside in Vietnam – and the mothers who waited for them to come home.

Readers’ Responses to the Book To Hear Silence

I was one of Ron’s Sergeants in Charlie Battery, but until Ron wrote this book, I had no idea what was going on around us. All we knew was what was happening in our little corner of the world, which for me, was where the Battery was positioned. I knew Ron to be very thorough and was concerned that his book would be a lot of facts, and not much literary value. Nothing could be farther from the truth! I had a hard time putting the book down and read it in three 120 page sections over three days. Ron did a great job humanizing the whole conflict, and describing the misery of the never-ending rain the first 3 or 4 months we were in-country. He also details the miseries of the real heroes of Charlie Battery, the F.O’s (Forward Observers) who were out in the elements the whole time with the ‘grunts.” I left the Battery near the end of May 1967 and returned to the world and was honorably discharged. This book told me what happened to the Battery after I left, and about their Khe Sanh experience. I highly recommend this book!

A first-person account of the Vietnam War. Unvarnished and true to life (and death). A “must-read” for everyone who thinks they know what war is like. Thank you, Ron, for your chronicle of Charlie Battery.

This book is an interesting read. It is not a rehash of the Vietnam War as told by historians, or politicians, or generals. It is the experience of a young man and his fellow marines as they dealt with jungle warfare. Hoffman tells his story well as he conveys to the reader his uncertainties and fears, and even adds some humor. I think this book will help those who did not serve in Vietnam, like myself, to understand the situation these young men faced and endured. This is an excellent book, and I highly recommend it.

About the Authors of the Book To Hear Silence

Ronald W. Hoffman worked for his father’s construction company before joining the Marine and returned to the job until he started his own remodeling company building garages and additions to people’s houses. In 1976 he went to work for the Weyerhaeuser Company in Manitowoc, Wisconsin, starting as an Assistant Designer working his way up through Designer, Senior Designer, Lab Manager, and finally Product Development Manager. In 1995 he began his own consulting business and retired at age 55. He and his wife Nancy are currently living in Green Bay, WI.

Photo is the author on the right laying a wreath in the nation’s capital in September 2014 during a reunion of Charlie Battery, 1st Battalion 13th Marine Regiment 5th Marine Division. A video of the ceremony can be found at:
https://www.youtube.com/watch?v=KuAknYLV-nY