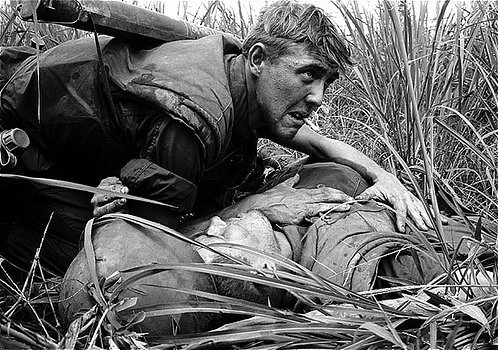 Operation Union II was a military operation that took place in the Vietnam War. It was a search and destroy mission in the Que Son Valley carried out by the 5th Marine Regiment. Launched on May 26, 1967, the operation ended June 5. It was a bloody 10-day battle that resulted in 594 NVA killed and 23 captured, while U.S. casualties were 110 killed and 241 wounded.

The Que Son Valley is located along the border of Quang Nam and Quang Tin Provinces in South Vietnam’s I Corps. Populous and rice-rich, the valley was viewed as one of the keys to controlling South Vietnam’s five Northern provinces by the communists and by early 1967 at least two regiments of the 2nd Division of the People’s Army of Vietnam had been infiltrated into the area. The 1st Battalion, 5th Marines (1/5) and 3rd Battalion, 5th Marines (3/5), experienced units that had fought in Vietnam since their arrival in the summer of 1966, were assigned to the valley in 1967 to support the outnumbered the South Vietnamese Army (ARVN) forces in the area.

From April 21 to May 16, the 3rd Battalion, 1st Marines had fought the PAVN 21st Regiment near the Marine outpost on Loc Son Mountain for control of the southern part of the Que Son Valley. Operation Union II was launched on May 26 to destroy the withdrawing remnants of the PAVN with a helicopter assault by the U.S. 5th Marine Regiment, commanded by Col. Kenneth Houghton. The assault was coordinated with ground attacks by the 6th ARVN Regiment and the 1st ARVN Ranger Group.

The operational plan called for 1/5, commanded by Lt. Col. Hilgartner, to establish blocking positions in the western portion of the valley while the 3/5, commanded by Lt. Col. Esslinger, was to make a helicopter assault into the southern part of the valley and sweep northeast. At the same time, the three battalions of the ARVN Ranger Group would attack southwest from Thang Binh, while two units of the 6th ARVN Regiment attacked northwest from a position near Tam Ky. The ARVN named their part of the operation Lien Kit 106.

The operation began the morning of the 26th with the 1/5 and ARVN troop movements proceeding as planned. 3/5, composed of three infantry companies, one weapons company, and a command group, was carried by helicopters to Landing Zone Eagle, an area five kilometers east of the Loc Son outpost. The first two waves to arrive at the landing zone (LZ) experienced only light small arms fire, but as the bulk of the battalion landed, the LZ was subjected to heavy weapon and mortar fire. An attack by Lima and Mike Companies launched to relieve the pressure on the LZ found a well-entrenched PAVN (NVA) force, identified as being elements of the PAVN 3rd Regiment, northeast of the landing zone.

Supported by artillery and air strikes, India Company enveloped the PAVN’s flank, and the Marines soon gained the upper hand. By the late afternoon, the Marines had overrun the last PAVN positions, counting PAVN 118 dead for a Marine loss of 38 killed and 82 wounded. The Marine and ARVN forces swept the area for the next three days but contacts declined as the PAVN withdrew from the area. Concluding that the enemy had been routed, the ARVN ended their part of the operation.

Col. Houghton, however, was not convinced and responding to intelligence reports he directed the 5th Marines to continue sweeping the region. On the morning of June 2, the Regiment was sweeping toward the Vinh Huy Village complex. 3rd Battalion 1st Marines encountered 200 PAVN troops entrenched 1,000 meters east of the scene of the May 26th battle, engaging and overrunning the PAVN by 1:30 that afternoon.At the same time the 1st Battalion, pushing forward to relieve pressure on the 3rd, was ambushed by PAVN troops while crossing a 1,000-meter-wide rice paddy. Caught in a crossfire the Marines were pinned down and consolidated their positions while calling artillery and air strikes on enemy positions. During heavy fighting Foxtrot Company, commanded by Capt. James A. Graham, was decimated. Capt. Graham was awarded a posthumous Medal of Honor for defending to the last his company’s dead and wounded.

At 2 p.m. Col. Houghton, commander of 1/5 called for the commitment of the First Marine Divisions Reserve “Bald Eagle Reactionary Force,” a battalion sized reactionary force unit made up of three different companies from different battalions, commanded by Lt. Col. Mallett C. Jackson Jr., the Battalion Commander of 2/5, to include Jackson’s own Echo Co. 2/5; Delta Co. 1/7; and Echo Co. 2/7. At 7 p.m., in total darkness, the Bald Eagle Reactionary Force units of E-2/5 and D-1/7 were inserted by helicopter northeast of the fortified enemy positions and quickly moved south to engage the (NVA) PAVN’s left flank positions in order to relieve battle pressure on the 5th Marine units of 1/5, 2/5, and 3/5, that were now pinned down by a large entrenched NVA force.

The Bald Eagle Reactionary Force companies of Echo 2/5 and Delta 1/7 quickly moved forward and were soon hit with heavy automatic weapons fire and heavy barrages of large 82 mm high explosive mortar rounds by the well-entrenched NVA enemy force. It was only whenE-2/5 and D-1/7 came under attack that Lt. Col. Mallett C. Jackson Jr. and his S-3 Operations Officer, Maj. Richard Esau who were together in a fighting hole in the middle of this attack when word came over the command radio, that the pressure had been taken off the pinned down companies of the 5th Marines. Delta Company 1/7 had taken many casualties and their 2nd Platoon Commander, Lt. David Harris radioed requests for medevac choppers, but all requests were denied because of the extreme darkness.

In desperation, Lt. Harris repeatedly called out several SOS’s and MAYDAY’s for an emergency medevac on the radio. Quickly the voice of Capt. N.J. Chilewski, the pilot of a large CH-53 Sea Stallion helicopter that had just dropped off the Bald Eagle Reactionary Force Marines of Echo 2/7 at the original landing zone, had taken off and now was flying at an altitude of 2,000 feet.  His reply back was “Of course we would” and with the help of a D-1/7 strobe light, the chopper was guided into the landing zone directly in the middle of the battlefield. The Marines with life-threatening wounds were loaded aboard the chopper and were flown back to the hospital for medical treatment. When the chopper returned to its Da Nang Airbase, it was noted that the chopper had received a total of 57 holes in its sides from the exploding mortar rounds and automatic weapons fire during the battlefield landing.

Later Col. Hilgartner described the insertion of the Bald Eagle Division Reactionary Force, led by Lt. Col. Mallet C. Jackson as crucial and helped change the dynamic in favor of the Marine.

The sudden presence of the strong Division Reactionary Force on its northern flank caused the NVA (AVN) units to disengage and make a hasty withdrawal to the southwest, but the move proved costly to them. Once the NVA (PAVN) soldiers left the protection of their fortifications, they were easy targets for the Marines supporting arms fire. The action of June 2 – 3 marked the last significant battle of Operation Union II.

Total enemy casualties were 701 killed and 23 captured, a favorable ratio to 110 Marines killed and 241 wounded. For actions in both Union I and Union II the 5th Marines and all units under its operational control, including the division reactionary force companies of Delta Company 1/7 Marines and Echo 2/7 Marines received the Presidential Unit Citation for its actions during Operation Union II.

The unwelcome discovery of a strong enemy force on its northern flank prompted the PAVN forces to attempt a hasty withdrawal during the night, exposing themselves to Marine supporting arms fire. Meanwhile, the 5th Marines regrouped and evacuated casualties. The Marines themselves suffered 71 killed and 139 wounded in the battle. The following morning, when the battalions swept the battle area, 476 PAVN dead were counted in and around the contested rice paddy and its formidable hedgerow complex. 31 weapons were captured.

Leaving a rear guard to slow pursuit, the main body of the PAVN withdrew rapidly, escaping to rearm and refit, a process that would eventually allow them to launch new attacks in September. However, for three months, the PAVN 2nd Division was no longer an effective fighting force. The entire 5th Regiment received the Presidential Unit Citation (US) awarded by President Lyndon Johnson.