The Boys on Cherry Street by Ron Boehm 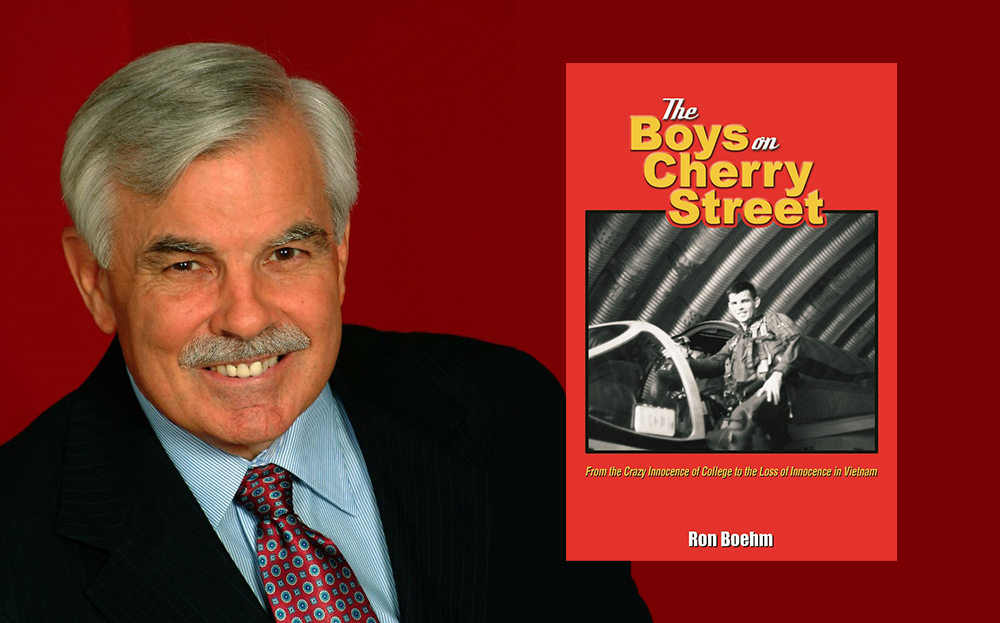 Tens of thousands of books have been written on the Vietnam War. Thousands more are in the process of being written, and thousands more are being considered by other veterans. Such books inevitably deal with heroic actions and stories of courage and sacrifice.

Boehm brilliant book also includes stories about heroes and their courage, but he wrote the book to be a different kind of book on Vietnam. He was highly successful.

It is a collection of the experiences of Boehm and his friends doing a lot of crazy and outrageous funny things together that were symbolic of the young men of the Vietnam War era, high school and college roommates and Marine buddies who fought in Vietnam~stories of barrooms, parties, and first-time exploits.

With humor laced throughout much of his writings, here is a prime example that when I envisioned the scene, I could not stop laughing: Fred Bonati, his friend who was leaving the Corps in a few months, let his hair grown long. One day a Major told him to shape up and get a haircut or that it would reflect in his fitness report. Fred responded by saying the only way he could hurt him with a bad fitness report was to wrap in around a brick and hit him in the head with it.

Boehm does write about highly dangerous and deadly missions over Laos and Vietnam, where he and his fellow pilots generally received NVA and VC ground fire. Yet, with a rare talent of a seasoned storyteller, he manages to find humor. He even did this while reflecting on his three months in the jungles, mountains and rice paddies of South Vietnam as Forward Air Control with the 1st Battalion 7th Marines. This is a highly unique talent for any writer, especially for a first-time writer.

Finding humor in dangerous situations also reflects what many combat veterans already know: even in the grimmest of situations, humor provides a coping mechanism that supported them through some unimaginable events.

I cannot speak highly enough about Boehm’s extraordinary gift as a writer, nor can I be more forceful about the importance of this brilliant book. For any man or woman who faced combat and historian of war, this may be one of the best books to add to your collection.

This is a great memoir that covers an important period in the history of the United States with facts, humor, and emotion. The author is a talented storyteller, and I like the way he organized his thoughts for this book. It starts on a light note, with his experiences of going to college, choosing a major, and ultimately deciding to enter the military. At that point, it’s very light-hearted, happy-go-lucky, fun-loving experiences typical of college kids.

Even his early days as a Marine are told in a humorous fashion, through his flight training and deployment to Vietnam. But once he is in Vietnam and flying in combat, his stories turn much more serious. He rarely goes into the gory details but does make it clear that war is a terrible way to settle disputes. But even in the midst of it, his sense of humor remains intact.

Finally, the author is quick to acknowledge his fellow Marines and their acts of heroism, while refusing to take as much credit for his contributions to the war effort. I appreciated his naming names and giving credit to those who made the ultimate sacrifice, as well as those who came home and received various medals and commendations for their service — including himself.

Well done, and thank you for your service!
~Ken Dwight

My daughter got me this book, and I must say it’s been one of the best reads that I have had in a long time, from his youth and college days the stories had me laughing out loud. Having served in Vietnam, I found myself going back in time when I was a young Marine over there. I recommend this book and would rate five stars.
~Lemon

Great read! This brought back fond memories of good friends, Squadron mates, familiar names, places, and the shared experiences of young officers during difficult times. I am honored to have been included!
~Walter Siller

I just finished this book. Being of that vintage and having served during that time frame, I found this book most touching. The first half of the book is “laughing out loud” belly laughing. These guys did more on one weekend than I did in my entire educational life experience.

The second half becomes much more serious, but it touches on the realities of life of just another American kid following a new dream, and living one which he never imagined, and perhaps never dreamed about until after the fact. Boehm is a good solid writer/storyteller. He brings to light some of the nuances of “just surviving” and everyday life while serving your country. He experienced life and the life of a Vietnam aviator. He saw the death of the friend and of the foe. He dealt with it and moved on. Reassuring and inspiring. Job well done.
~Tom C

Ron Boehm was born and raised in New Orleans, Louisiana. After graduation from Southeastern Louisiana College, he went through OCS in the U.S. Marine Corps and was commissioned an officer. He was one of the first group of aviation students the Marine Corps sent through U.S. Air Force Flight School. After earning his Air Force and Navy Wings’ he flew the A6A Intruder in combat and served as a Forward Air Controller with the 7th Marine Regiment in Vietnam.

Ron currently lives in Houston, Texas, has two children and owns a construction company. This is his second book.