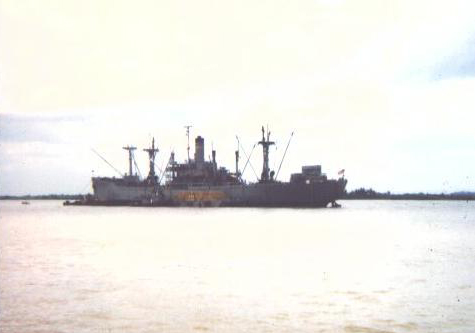 The Vietnam War from its outset presented novel threats to US forces from unfamiliar terrain, embedded supply practices, enemy infiltration tactics and more.  Striving for strategies to achieve battlefield supremacy the Army relied on tried-and-true practices, applying equipment and personnel in innovative ways to gain an advantage.  Without question, the single largest departure from earlier conflicts was the extensive rivers and waterways, creating unique logistic and combat challenges.  Drawing largely on experience with amphibious operations in both WWII and Korea, the Army deployed its Transportation Corps with both defensive and offensive roles.  Spanning May 1965 to February 1972 the 1099th Transportation Company, popularized as the “River Rats”, became the most decorated boat unit in Vietnam.

The 1099th Transportation Company’s roots reach back to 1953 in the form of the 159th Transportation Battalion, activated at Fort Eustis, Virginia.  Comprised of four companies with letter designations A through D, the 159th was expert in operating landing craft for combat and logistical support during joint amphibious operations and tactical mobility, combat and logistical support in the ship to shore missions. The only designated combat battalion in the Transportation Corps, many of its original members were veterans of the Incheon landings in Korea.  On 25 September 1959, the Battalion was reorganized as HHC, with Companies A, B, and C redesignated to the 1097th, 1098th and 1099th Transportation (Medium Boat) Companies, respectively, with D Company disbanded.  Nonetheless, much of the unit’s character was attributable to those interim years and the then battalion commander, LTC Michael D. Isrine.  A flamboyant personality, he was said to be chauffeured by his military driver in a Jaguar alongside his Dachshund (Gretchen) and is responsible for the unit’s insignia and motto “Hit the Beach”.  In the attempt to retain Esprit de Corp across the transportation units Isrine also restored unique features of the amphibious engineers’ uniform dating back to WWII and was reported to routinely fine any soldiers seen to not be visibly engaged in some activity while on duty.  Though these practices would not survive long term, the effects would become embedded as cultural traits of the later transportation companies.

With the US “Gulf of Tonkin” resolution authorized on April 29, 1965, empowering President Johnson to wage an all-out war against North Vietnam, no time was wasted in deploying the 1099th.  Elements of the Company arrived in May 1965, first based just outside of Tan Son Nhut Air Base, but then moved to Camp Davis (also known as the Fish Market) with the rest of the Company arriving in July.  The US Army had three major ports that supplied units in the field.  One medium boat company was assigned to each one with the 1099th operating out of the Saigon area.  Though the primary mission of the unit was to provide and operate landing craft for the movement of personnel and cargo for Army terminal operations, the 1099th served a dual mission as the 11th Battalion logistical support and 199th Light Infantry Brigade tactical support.  Acting as a troop carrier for the 199th Riverine Forces and other tactical units operating throughout the vast river complexes of Saigon Port, the unit became widely known by their nickname “River Rats” and growing reputation, “We haul anything, anytime, anywhere and under any conditions”.  According to veterans, “the thing that separated the 1099th from other boat companies was that we were a combat boat company engaged in direct combat support; if it was safe or easy someone else did it”.

To accomplish their mission the transportation companies were authorized for two 65-foot steel hull command boats, one 46-foot steel hull control boat and 33 LCM-8 (landing craft mechanized).  The LCM-8s (called Mike Boats) were well suited for river and inland waterway operations due to their shallow draft and when fully loaded could carry 60 short tons of supplies or 200 personnel on short missions.  However, the craft traveled between nine and twelve knots fully loaded and provided an easy target for enemy forces.  Under constant danger of attack from the riverbanks by Viet Cong snipers, rockets or water mines the crews were equipped with two M-60 machine guns mounted on top of the shack and two 50 caliber machine guns mounted on the quarterdeck.  One soldier described river travel as “ranging from scary to terrifying beyond comprehension”, which could be compounded by mission objectives.  By example, 1099th boats were retrofit with 10,000 gallon bladders to transport JP4 aviation fuel to remote bases, using waterways too narrow for other craft and ideally suited for an ambush.

Nonetheless, evolving strategies created the need for tactical innovation including the use of LCMs and their crews.  In one example an LCM was outfitted with a platform covering the well deck and utilized as a floating helipad for UH-IB and UH-ID helicopter gunships.  A second craft was mounted with 105 mm howitzers and 4.2″ mortar on the deck to serve in a support role.  A further development to support large scale infantry operations again involved the retrofit of a 105 mm Howitzer.  Two LCM, one carrying the Howitzer and four-man artillery crew, the other carrying an infantry platoon would position themselves and wait for destination coordinates to be radioed.  On arrival the Howitzer fired several rounds of beehive to clear the landing area, the infantry swept the area of enemy and artillery then provided fire support for infantry in distant locations.  Upon completion of the fire mission the boats pulled back and waited for further direction.

The 1099th distinguished itself in combat and logistical support operations throughout its tenure in Vietnam, but equally stirring are the humanitarian accomplishments.  The men were touched in particular by the plight of orphans rampant throughout the villages.  One soldier recounted the Company’s leadership in flood relief efforts, carrying villagers to safety and their eventual return.  In a further goodwill mission, a herd of water buffalo were rounded up and transported to a farmer, replacing those killed during a firefight.  Unexpectedly, 50% of the soldiers involved in the transport were injured and led the men to equate the herd to an infantry company of VC.  In these cases, and others, the 1099th acted selflessly and in the best interest of Vietnamese locals, but oftentimes these efforts were driven by combat operations.  In one such event, the US compiled Operation Cedar Falls to drive the Viet Cong out of the Iron Triangle, a long-time haven for Viet Cong forces to launch attacks on US installations in and around Saigon.  To safeguard locals from ensuing battles the 1099th evacuated 6,000 villagers and their animals from the 60 square mile area.

The complexion of war has changed significantly and continues to evolve with new technologies and lessons learned on the battlefield.  One such development is the growth of combat support resources and related operations.  In fact, it has been suggested that 85% of the military are now in support roles and the figure is growing.  The simple reason is that these resources are able to change the tide of battle and determine outcomes.  The most decorated boat company in Vietnam, the 1099th Transportation Company demonstrated this ability and the commitment to purpose that underlies this success, but perhaps said best by a 1099th veteran, “I find myself very proud of what we did, I give a damn less about the war or the government, but proud of the help and support we gave to the combat units we worked with, supported and protected.