Unforgotten in the Gulf of Tonkin by Eileen A. Bjorkman 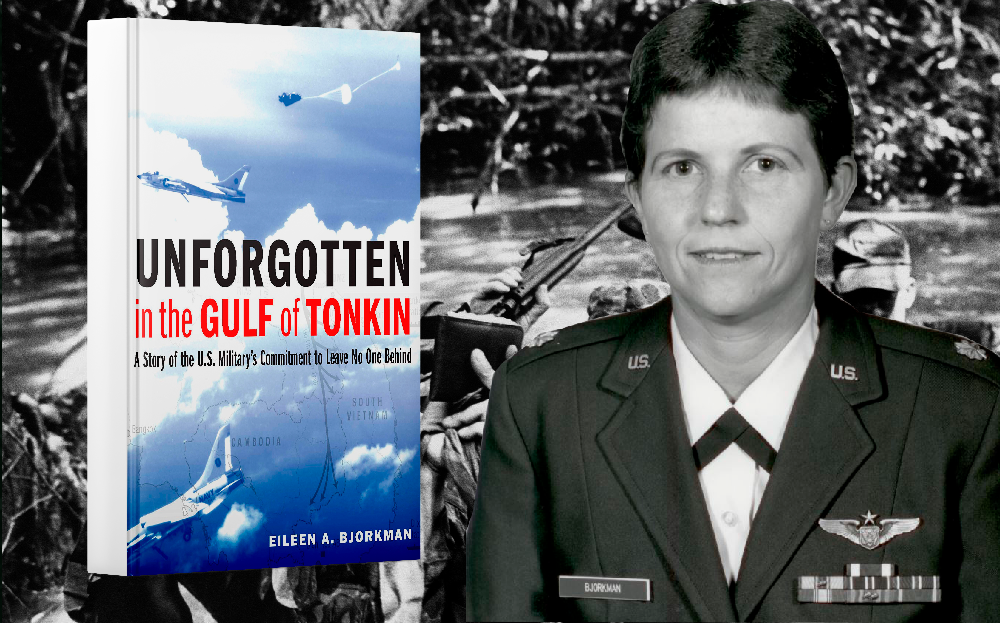 When Air Force Maj. Alan Saunders arrived in Vietnam in June 1963; true combat search and rescue (CSAR) as we know it today was just beginning to form. Saunders was bringing his experience fighting World War II in the jungles of Burma to Det. 3, Pacific Air Rescue Center in Tan Son Nhut.

Saunders knew that the jungle didn’t burn and create smoke around the wreckage of a downed aircraft. Nor did it easily cough up a surviving pilot, soldier, or Marines separated from their units or anyone else unlucky enough to be in the jungle alone and among the enemy.

Instead, the dense jungles of Southeast Asia swallowed aircraft whole. When it went in, the trees opened up, and the canopy quickly closed around it. Finding a downed aircraft, even a flaming one, was difficult if not impossible, Sanders said.

It was the beginning of a sea change in how the United States military treated its missing in action. Before Vietnam, the U.S. was limited by not just the enemy but the aircraft, training, and technology needed to rescue missing persons, especially downed pilots. Helicopters appeared in combat before the Vietnam War, but the technology was perfected in the years leading up to the war in Southeast Asia, Bjorkman writes.

This isn’t because the United States military didn’t see it as a worthy endeavor before Vietnam, but rescuing aircrews before the 1960s often put the rescuer at risk of going down in the effort to rescue comrades. During World War II and the Korean War, aircraft just weren’t equipped for those roles.

During the Pacific War in World War II, flying boats like the OA-10 Catalina could be used to pick up downed airmen in the water, but their carrying capacity was limited. Even early helicopters like the Sikorsky YR-4B used in Burma in 1944 were unreliable at best.

Eventually, the technology came about to meet the needs of CSAR, and the Air Force began to perfect the way it trained pararescuemen and the pilots that flew them to downed airmen, aircraft, and even space mission capsules in the ocean.

Maj. Saunders wanted the Army to adopt the same rigorous standards – an oversight he believed was costing lives. Crews were drowning after bailing out of aircraft when they could have been saved by a professionally trained CSAR crew.

After Saunders arrived in South Vietnam in 1963, it took considerable effort and lobbying to convince the Army to use professional search and rescue forces in the war. The effort would pay off, however, and the way the U.S. saw its missing in action would be forever changed.

Just during Saunders’ tenure in Vietnam, within a year, Saunders could have an H-43 helicopter and rescue crew airborne in 90 seconds. The effort to staff and train combat search and rescue troops resulted in airmen locating 248 out of 250 down aircraft crews.

About the Book Unforgotten in the Gulf of Tonkin

“Unforgotten in the Gulf of Tonkin: A Story of the U.S. Military’s Commitment to Leave No One Behind” is full of vignettes of fascinating stories from the birth of combat aviation to the rise of combat search and rescue. It weaves together a tapestry of short stories that all add up to display the most awe-inspiring aspect of military life – that no matter what happens, the U.S. military will come back for its own.

Interested readers can pick up a copy wherever books are sold or in a digital format for around $23.00.