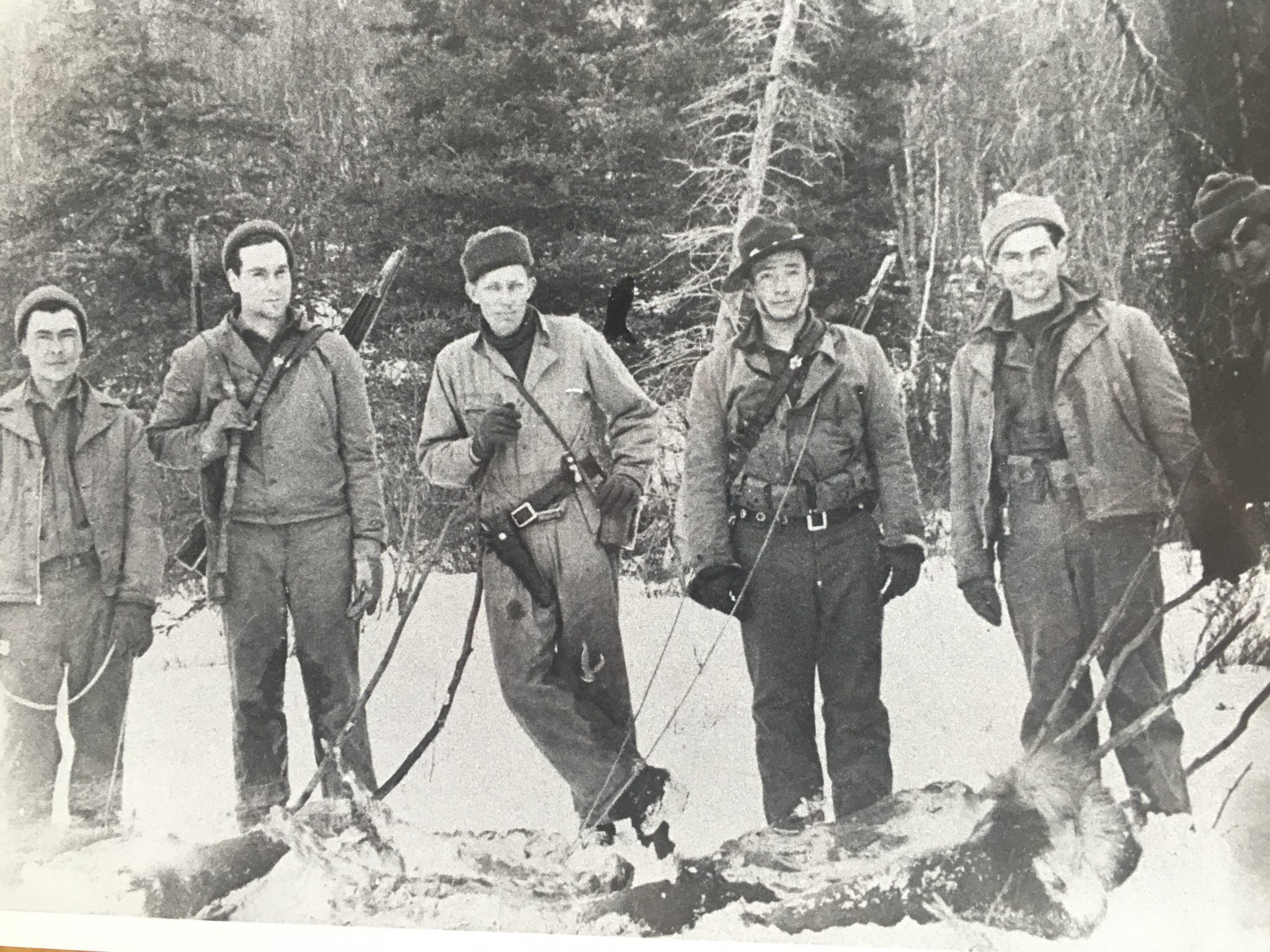 The Aleutian Islands are unknown to many Americans and in 1941, upon entry of the US into WWII, even fewer. Remote volcanic islands (1200 miles from Alaska), barren and plagued by harsh weather and unforgiving winds make them seemingly unlivable and bear little consideration except to the native Aleuts that call them home.  Nonetheless, with US-Japanese tensions running high, as early as February 1941 efforts were underway to form the Alaskan Defense Command.  Recognizing broad strategic value in the Alaskan territories, Colonel Lawrence Castner argued that ultimate success in these regions lay in creating an intelligence brigade, resources that knew the land, how to live off it unaided and move about undetected-a perfect fit for spying on the Japanese.  Given authorization only weeks prior to the Japanese attack on Pearl Harbor recruiting began to form the 1st Alaskan Combat Intelligence Platoon, or Alaska Scouts.  Shortly thereafter (February 1942), by authority of Executive Order 9066the US military forcibly relocated the native Aleut population to internment camps, destroying their villages with a scorched-earth policy to undermine any invading Japanese troops.  Then, on June 6th, 1942, Japanese troops quietly captured the two western most Aleutian Islands, Attu and Kiska, with virtually no resistance.  This was the world into which the Alaska Scouts were thrust, a unit whose exploits would cause them to become better known as “Castner’s Cutthroats”.

Despite activities of the Alaskan Defense Command and formation of the fledgling Alaska Scouts, US attention was firmly focused on interests in the South Pacific.  Castner and others actively promoted the belief, “whoever holds Alaska holds the world” because of its strategic location.  But following entry into WWII in December 1941 and reeling from ongoing Japanese aggression the US had limited resources available in the Pacific.  By late 1941 Marine Defense Battalions had already been deployed to US locations deemed to be the most strategic in the Pacific (Pearl Harbor, Wake, Midway, Johnston, and Palmyra Islands), and by early 1942 all assets that could be spared had been reassigned from the Atlantic to the Pacific Theatre.  By amassing forces, in May 1942 the US was able to stand against the Japanese in the Battle of the Coral Sea and readied itself for ensuing action that would both turn the tide of war in the Pacific and shape the future of the Aleutians.  Like Castner, Japan’s General Higuchi Kiichiro believed that if he controlled the Aleutians, Kiska and Attu specifically, he would control northern sea routes to prevent Allied actions against Japan, with air bases to launch offensive attacks.  So, in league with Japan’s final assault on Midway a battle group was dispatched in early June against the Aleutian Islands, in part as a diversion, but taking Kiska on June 6th and Attu on June 7th, 1942.

Castner then began recruiting Alaskans, quickly adding ten men, one of whom had ten years of service in Alaska and another, a former park ranger at Mt. Rainier National Park.  When the platoon was expanded to twenty-four members Lieutenant Robert Thompson was added, promoted to Captain, and later made the unit’s commander once the force reached a strength of sixty-six.  Knowing they would be called upon for unusual duty the men undertook fifteen-hour days of physical training devised for leg strength and endurance, alongside Morse code, surveying, and Commando skills.  Operating in isolated groups of ten or fewer and given great latitude to accomplish their missions, the men had to live off the land and use stealth to avoid being discovered by the enemy.  “The scouts were all very talented outdoorsmen; they could live and operate anywhere” according to Lt. Acuff.  Already proficient in weapons use there was little need for training.  Standard issue for Castner’s Cutthroats was a Trapper Nelson pack, hunting knife, .22LR caliber target pistol and a sniper rifle, instead of the standard issue Springfield rifle, or M1 Garand, but the men were highly encouraged to carry what they were most comfortable with.  Walker, for instance, preferred the Browning Automatic Rifle, capable of twenty rapid fire rounds.

The Scouts saw their first action with the Japanese assault in June 1942.  Anticipating the invasion, detachments were inserted on remote islands along the Aleutian chain to watch for enemy forces.  When Japanese aircraft bombed Dutch Harbor as a distraction from the planned invasion on Kiska and Attu, a Scout detachment at Kodiak was able to report on the enemy tactics.  Thereafter, the Scouts led reconnaissance missions to gather intelligence on troop movements and plan landing zones for eventual amphibious assaults against the Japanese-held islands.

Although Allied bombers could reach Kiska fighter escort was impractical, and in the face of the Japanese invasion the need for an Aleutian base further west on Adak Island became urgent.  So, on August 28, 1942, the submarines USS Triton and USS Tuna disembarked a thirty-seven man Scout detachment led by Colonel Castner.  Paddling four miles in rubber boats to reach shore reconnaissance found Adak uninhabited, clearing the way to land 4,500 men and tons of heavy equipment on August 30th.  The mission of this Task Force was to build an airstrip and staging area in preparation to retake the Aleutian Islands, however no suitable location for the runway could be found.  Undeterred, the Scouts set about damming the entryway to a lagoon, then draining and leveling the sand bottom for installation of perforated steel planking (Marston Mats).  Later expanded and enhanced by engineers, construction began on September 1st, with the first bombers flying off the airstrip on September 14th.

The initial Japanese occupation force numbered only five hundred but was sufficient in the absence of US resistance and represented the first time an enemy landed on US soil since the War of 1812.  The soldiers, who would eventually number 2,900 on Attu, were from Northern Japan and were accustomed to working in the cold and windblown Aleutian conditions, making them a formidable force.  Following the landing they took nine American prisoners at a naval weather station on Kiska, and the next day on Attu they captured forty-three native Aleuts and an American couple from Ohio.  These prisoners were transported to a prison camp at Otaru, Hokkaido, where sixteen of them would die.

Otherwise, the U.S. military had forcibly evacuated indigenous people from their homes deemed to lay in a combat zone.  The internment camps included “abandoned canneries, a herring saltery, and gold mine camp- rotting facilities with no plumbing, electricity or toilets”.  There, they reportedly had little potable water, no warm winter clothing, and sub-par food.  Of the 880 moved, 75 died in the camps due to infectious disease during the two years of internment.

From September to October 1942, the Japanese moved all operations to Kiska, leaving Attu undefended.  But at the end of October, the Japanese returned to Attu under the command of Lt. Col. Hiroshi Yanekawa and established a base at Holtz Bay, preparing for the inevitable American assault.

Castner’s Cutthroats Was Guides and Messengers for the Army Regulars

Then, in March 1943 US intelligence identified a Japanese supply convoy intended to reinforce the Aleutian Islands.  In response the US dispatched an understrength fleet of ships to intercept the convoy.  On March 27th the two forces met in what has become known as the Battle of the Komandorski Islands, a naval surface battle that opened the sea lanes to enable a US response to the Japanese invasion of Kiska and Attu.  Two months after Komandorski, the U.S. was ready to act.

Operation landgrab, the US campaign designed to retake the Aleutians was launched May 11th, 1943, from Adak Island against the Japanese garrisoned on Attu.  Comprised of 11,000 soldiers from the US 7th Infantry Division the invasion force landed in a coordinated attack at the north and south ends of the island.  Making their way to high ground that was further inland US forces would pay a heavy toll and the Battle of Attu would become the second deadliest battle in the Pacific Theatre, just behind Iwo Jima.

During the American counterattack, Castner’s Cutthroats main mission was to serve as guides and messengers for the army regulars.  In some cases, Scouts like Lt. Acuff were placed alone on islands to give reports on aircraft sightings.  Unfortunately, and despite guidance from the Scouts, the US Command believed this to be a simple in and out mission, so American units were not adequately provisioned- not even enough food.   Much like the South Pacific soldiers had to search every nook and cranny for their enemy, but here, in the rain, snow, and 120 mile per hour winds.  Soldiers quickly began to suffer from trench foot and gangrene, losing morale and physical strength due to extreme cold and hunger.  When they did find Japanese soldiers, they were forced to fight the hardier men in intense small battles.  Leveraging their expertise, the Scouts set about instructing the Army regulars in survival skills, foraging off the land and improvised sheltering, many men owing their lives to 1st Alaska Combat Intelligence Platoon.

As the Americans closed on remaining Japanese at Attu, their commander decided to risk a Bonzai charge on US forces, planning to capture their artillery and return to cliff side caves until reinforced.  Launching the attack in the early morning of May 29th the Japanese were able to penetrate US lines in fierce hand to hand combat.  However, the Americans responded with overwhelming fire support to quell the attack and on May 30th declare victory.  It was then that many Japanese soldiers committed suicide, often using grenades.  One doctor from a Japanese field hospital recorded in his journal that he killed all of the patients before taking his own life.  Nonetheless, a few small groups of Japanese fought on into July, refusing to surrender.  For their leadership in combat two Scouts, Corporal Bagby and Private Conrad were each awarded the Silver Star.

The ferocity of fighting on Attu and need to reprovision caused the US to postpone its retaking of Kiska, where an estimated force of 5,200 Japanese troops were entrenched.  However, on July 29th, 1943, Japanese forces executed a daring escape from the island.  With US ships diverted by false radar signals, eight Japanese warships closed on Kiska and in fifty-five minutes boarded the total force undetected.  So, when 35,000 US troops stormed ashore on August 15th, they found the island abandoned.  But despite the absence of an enemy to fight, an estimated two hundred Allied soldiers died, victims of friendly fire, booby traps, a floating mine in the harbor and other live ordnance.

The occupation of Kiska was the last major operation for the Alaska Scouts.  Returning to Fort Richardson the unit helped survey Western Alaska until the unit was deactivated in 1946.  The “Cutthroats” were good men, tough as nails, strong in spirit, and loved the land they defended.  Attu and Kiska are now much like they were when the Alaska Scouts navigated these islands, untouched battlefields and artifacts of war that serve as portals back to an often-forgotten time.

Though the last surviving Alaska Scout, Lt. Earl Acuff, died in 2013 the Cutthroats legacy, like the Aleutians, will endure.