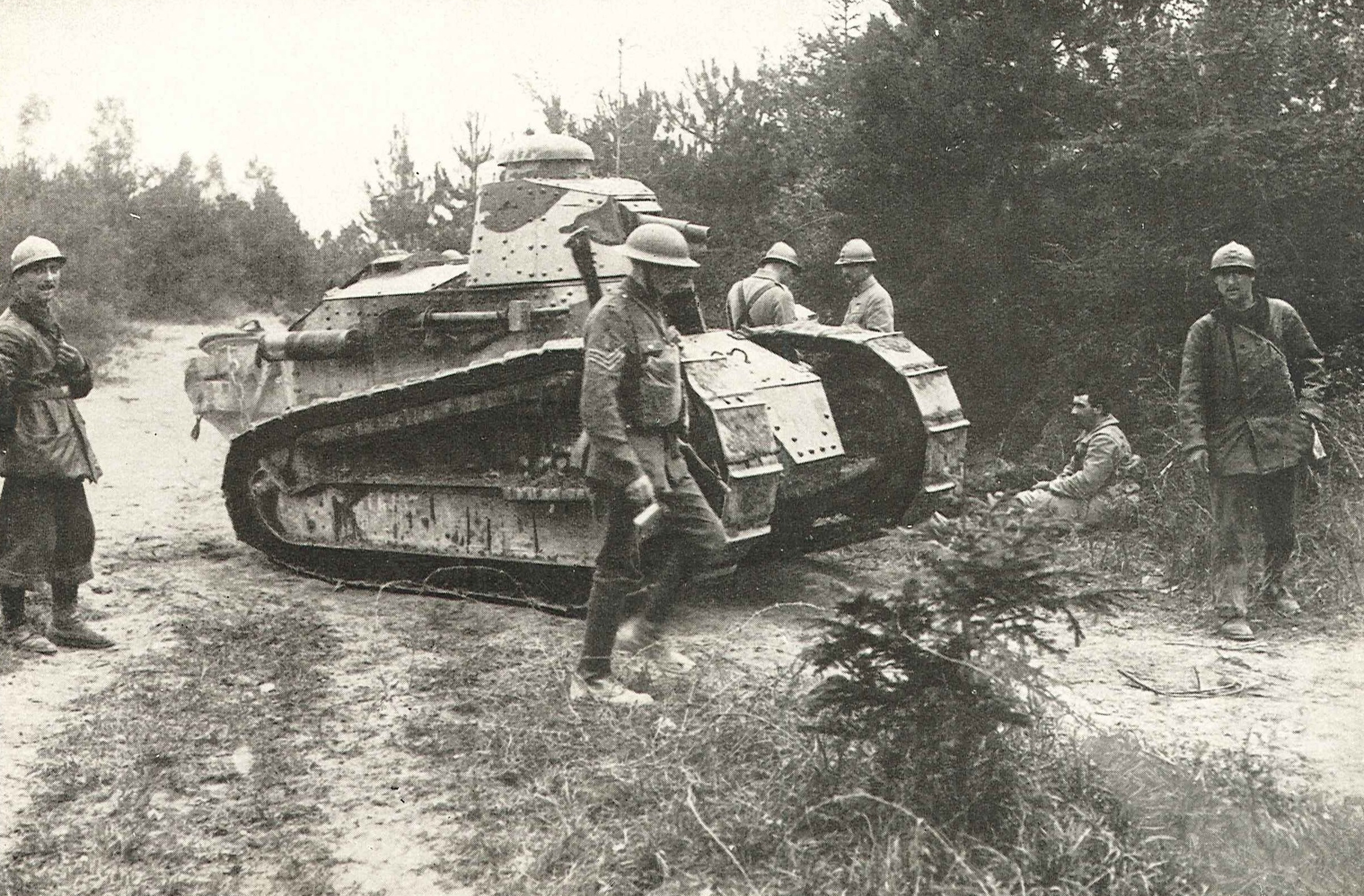 WWI military technology evolution is an ongoing process, and breakthroughs in new weapons and defensive systems make the news every year. However, many modern warfare staples have their roots over a century ago – in World War I. From deadly drones to invaluable radio systems, five technologies developed in the Great War are still used today.

British Mark IV tank with Tadpole Tail, introduced in 1917 and used during the latter part of the First World War. The Tadpole Tail was an elongation of the rear horns to increase trench-crossing power, necessitated by the wider trenches of the Hindenburg Line. Date: 1917-1918.

An instantly recognizable symbol of 20th Century warfare, the tank was developed in secret by the Allies during World War I. It was conceived of as a so-called “land-ship,” but a codename for the project had to be used.

To maintain the element of surprise, the Allies referred to these new war machines as “Water Carriers,” and then later simply as “Tanks.” Although this was just a tactic to throw off the Germans, the name stuck.

To this day, tanks are still used in military actions across the globe. While the design of the tank has been refined and developed a great deal during the last century, this is one technological innovation we owe directly to World War I.

Though they’re often seen as a controversial symbol of modern warfare in the 21st Century, the unmanned drone has its roots in World War I. In 1916, the U.S. Navy began working on prototypes of an unmanned aerial bomb. It weighed 175 pounds and proved to be less than effective – at least at first. Early attempts to test the new weapon yielded unsatisfactory results, lacking accuracy being the main problem. Eventually, the project’s interest and funding dried up, and early attempts to build a functional drone were shelved.

Many years later, a model airplane enthusiast named John Stuart Foster Jr. decided to try using his hobby as the basis for developing a new weapon. By 1973, the Defense Advanced Research Projects Agency had created two prototypes based on his designs – although they were relatively primitive by today’s standards. They formed an essential link in the chain between an idea first conceived of in World War I and a deadly weapon used by many nations today.

Five years after the first plane was launched from the deck of a moving ship, World War One demanded fresh innovations in aerial warfare. No one had ever landed a plane on a moving ship, and there were no vessels designed specifically for this purpose. Britain, however, had just built a new warship, mounted with two enormous 18-inch guns. It was decided that the force of these weapons might damage the structure of the ship itself, so another use had to be found for the HMS Furious. A large platform was built onto the deck, allowing the vessel to become the first ship on which planes could be both launched and landed.

While modern aircraft carriers can weigh up to 70,000 tons and are built with a host of cutting-edge technology, World War I remains integral to their conception almost 100 years ago.

Until World War I, there were no systems in place for pilots to communicate with anyone on the ground. Once a plane was in the air, its crew was completely cut off from fellow pilots around them and anyone down below. Although cable communications were initially developed to remedy the problem, they were too easy for German forces to intercept. In the end, the answer proved to be radio technology and, although this had been around for a while, it was developed into a working communication system for pilots during World War I.

It was in 1917 that, for the first time, a voice was transmitted from a flying plane to officials on the ground, via radio. It was a great breakthrough, and it paved the way not only to the systems used by modern military aircraft today but to all subsequent air traffic control.

Before World War I, the Gatling gun was the closest thing to a modern machine gun in use. It was a large and unwieldy weapon, resembling a cannon and weighing almost as much. As such, it proved to be of little use on the battlefields of Europe. Something more effective and mobile was required, and the Vickers machine gun was the solution. Although each gun needed at least six men to operate it, it proved invaluable in combat and quickly gained a reputation as an extremely reliable piece of equipment.

This weapon became a fixture of modern warfare, with handheld machine guns seeing use throughout the world. While the gun’s development and evolution have certainly slowed in recent years, this is only because current designs meet most requirements and, for now, need little improvement.