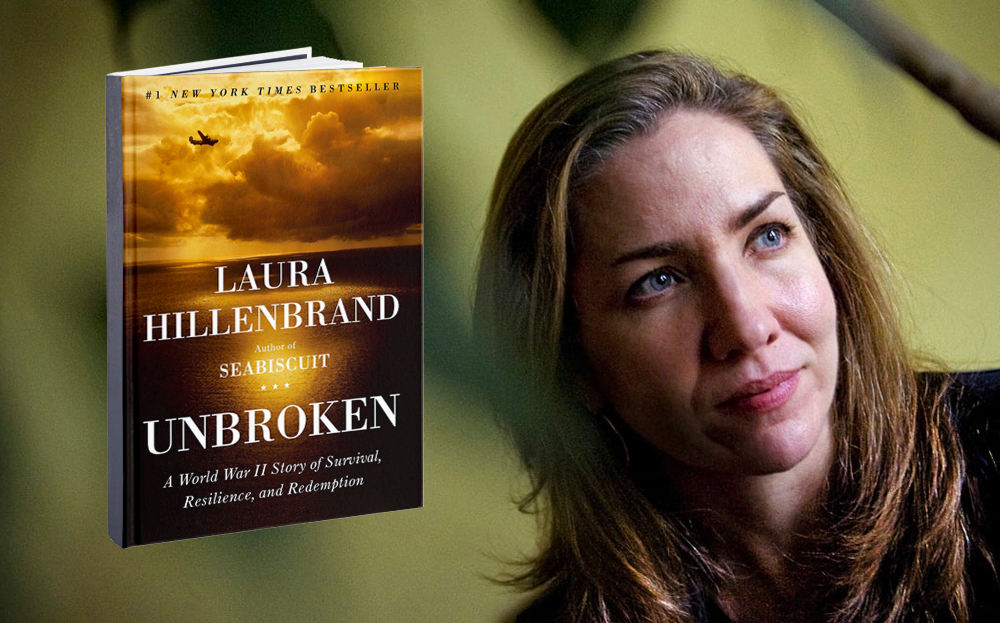 On June 23, 1943, three American soldiers had been drifting in the Pacific Ocean for twenty-seven days. The rafts were deteriorating, their bodies were covered in salt sores, and they didn’t know it at the time, but there would be another twenty days of drifting ahead for them. Only two of the three would survive. One of them was former Olympic runner Louis Zamperini whose life would never be the same.

Laura Hillenbrand’s Unbroken is an amazing study in resilience, defiance, and strength that takes you on the journey of one man’s lifetime. Zamperini was an incorrigible child, a natural runner, and a man who would not be broken. He survived unspeakable torture and deprivation at the hands of his Japanese captors only to find himself being tortured by his memories after returning home at the end of the war.

Being overtaken with the reoccurring tortures that resided in his mind, Zamperini turned to alcohol. He reclaimed his life after hearing an inspiring speaker in a tent on a street corner in Los Angeles. That speaker was Billy Graham. Graham taught him about total forgiveness. It was then and there that Louie was able to release the hatred and take hold of his own life and destiny.

Laura Hillenbrand, the author of Seabiscuit, brought the story of depression era wonder horse to us all. Now she brings us the story of Louis Zamperini, who as of this writing is ninety-three years old and residing in Los Angeles. Hillenbrand said that she came across an article about Louis Zamperini while doing research for Seabiscuit and set it aside. I’m glad she went back to Zamperini’s story. In one of her countless interviews with Mr. Zamperini spanning seven years, he assured Hillenbrand that “I’ll be an easier subject than Seabiscuit because I can talk.” Although Unbroken is over 450 pages in length, but there’s never a dull or lagging moment, just the opposite. The story flows quickly, and the suspense keeps you turning the pages.

Zamperini’s struggle to reclaim his life is beautifully told by Hillenbrand. In Unbroken, Hillenbrand captures the spark of a man determined to survive what he had to and to come out the winner he’d always been.

I’m a voracious reader. Addicted to reading since I was a young child. I love and read a great deal of history. This book was hands down, one of the best written I’ve ever read on WWII. Laura Hillenbrand is now as beloved an author to me as Stephen Ambrose.

My grandfather spent years in Europe during WWII. My mother tells the story of meeting her father for the first time when he came home after the war. He left when she was a toddler and she had no memories of him before the war. Sadly, there was no information on PTSD in those years. He did his best, but the war broke him in profound ways that would chase all his children and grandchildren through the years.

This book has given me great sadness for what all the men suffered but has also healed a wound. Grandfather didn’t hate us all, he was merely dealing with a burden he could never share. Great book. Very well written. I haven’t stayed up all night reading in many years, but this book has me that rare pleasure of trading sleep for getting lost in a story.
~Amazon Customer

Laura Hillenbrand follows her spectacular biography of racehorse Seabiscuit with the gripping tale of Louis Zamperini’s life and tribulations as a downed airman in WWII. Unbroken is written in Hillenbrand’s inimitable style, blending global events with personal anecdotes from the lives of Lt. Zamperini and his family and fellow airmen.

Prior to the war, Zamperini had overcome serious obstacles to become one of the best milers in track and field history, competing in the 1936 Olympics in Berlin with Jesse Owens and other famous American Olympians. As America entered WWII he became a bombardier flying B-24s in the Pacific Theater. When his plane ditched in a remote part of the Pacific, Louie and two colleagues survived the crash and drifted thousands of miles for more than 47 days before being picked up by a Japanese ship. During those weeks they endured unthinkable hardships: one of their companions died aboard the life raft, they were repeatedly attacked by sharks, and strafed by Japanese planes.

After Louis and his pilot, Russell Allen Phillips were “rescued,” an even more harrowing journey began, as both men were incarcerated in a series of brutal Japanese POW camps. The vivid descriptions of camp conditions and the inhuman brutality of many of the prison guards are gut-wrenching. The depth of depravity that Louie and his fellow prisoners had to endure is unimaginable, and the fact that he survived to live a productive life is a testament to his incredibly resilient and unbreakable will and spirit.

The author does not shrink from telling about Louie’s post-war troubles with alcohol, rage, and PTSD. The account of Zamperini’s reluctant encounter with evangelist Billy Graham, is touching and instructive, for it proved to be the event that allowed Louie to finally come to peace with his hatred of the worst of the Japanese guards, Mutsuhiro Watanabe, “The Bird,” Louie was finally free of the haunting nightmares and his need to seek revenge.

As I was reading this book, one of my close friends saw the book in my hand and said: “This book changed my life!” The story of Louie Zamperini and his trials and tribulations is that inspiring.
~Alan L. Chase

Laura Hillenbrand grew up in the northern suburbs of Washington, D.C., and began writing at an early age. While attending Kenyon College, her life would change when she suddenly fell ill with chronic fatigue syndrome, a debilitating condition with no cure. Confined to her home, Hillenbrand began writing in earnest, and her first book, ‘Seabiscuit,’ published in 2001, sold more 6 million copies in the United States alone and has been translated into 15 languages. It also spawned a hugely successful film that garnered seven Oscar nominations.

Adding to her massive bestseller, ‘Seabiscuit,’ was ‘Unbroken,’ the life story of Louis Zamperini, Olympic athlete, and war hero. Like her first book, ‘Unbroken‘, was another major bestseller that inspired a 2014 film, directed by the actress Angelina Jolie.

Hillenbrand continues to write for publications like The New York Times and Vanity Fair, among others.