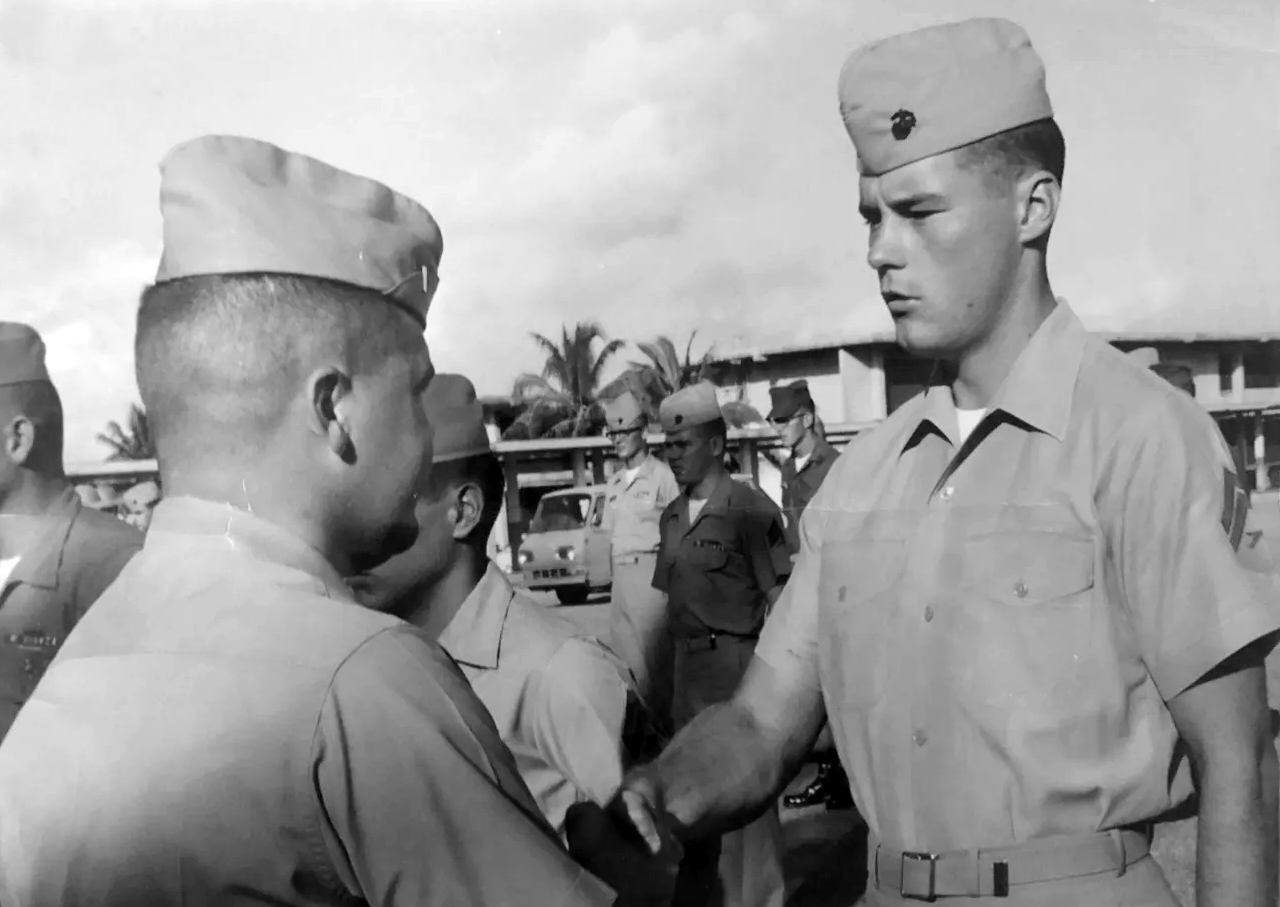 Michael Wynn is a Marine Sargeant, a four-year USMC volunteer, of First Battalion, Third Marines, hailing from Marion, Ohio who took part in Operation Ballistic Charge near Dai Loc, in Quang Nam Province, South Vietnam. He shared a history of his motivation to join the Marine Corps which was a mixture of patriotism and seeking excitement and adventure.

“My name is Mike Wynn and I was born on January 17, 1947. I grew up in Marion, Ohio, and attended Olney Ave. Elementary, Edison Jr. High, and graduated from Harding High School in 1965. I played baseball and football for Harding for 3 years.

I enlisted in the United States Marine Corps in 1966. After high school, I attended Otterbein University on a football scholarship. During the season I concentrated on my studies to keep my eligibility to play football. After the season I found other interests and let’s just say I came to a mutual agreement with the school that I would not be returning the next semester. Four of us, including my best friend Dan Schott, decided to join the Marine Corps for 4 years. We were in from 1966-1970. My motivation to join was a mixture of patriotism and seeking excitement and adventure.

I had never been on a plane or seen the ocean so I was excited when the recruiter said I would be flying to San Diego for boot camp. When it came time to leave there was an airline strike so we had to take a 3-day train ride instead of flying. It was so crowded we had to stand between cars and play cards most of the trip. California seemed like paradise with the ocean and palm trees. Boot camp soon changed that.

New recruits always arrive to boot camp in the middle of the night in the Marine Corps. It is planned that way to increase the shock value. When we arrived by bus all hell broke loose. The drill instructors got on the bus yelling and nearly throwing us off the bus. I was wondering what I had gotten myself into. Boot camp was brutal both physically and psychologically. I went in weighing 210 pounds and came out at 190 pounds. The psychological side was the worst as they completely break you down and build you up as a Marine. I hated it then but appreciated it later in Vietnam. On the last day they got us all together to tell us what our job would be and where we were going. 90% of us were infantry and got orders to Vietnam. I was now a grunt in the Marine Corps.

After 6 months of infantry training, I was off to Okinawa which was a staging area for guys heading to Nam. I guess because of my rifle range scores I was put into sniper training. My buddies were all off to the war and I was stuck on Okinawa for many months of training. After a month or so I went to the commanding officer and requested a transfer to Vietnam. He was happy to oblige.

I was attached to the 1st Battalion, 3rd Marines who were getting ready to leave Okinawa for Vietnam. The unit was a Special Landing Force that was based on several ships and made helicopter and amphibious landings into Vietnam. I left on the USS Okinawa, which was a small aircraft carrier for helicopters.

A thousand of us lived aboard the ship for a short period and then went by helicopter for operations in and around the DMZ. We were usually in country for 1-2 weeks and then back to the ship for a few days until the next insertion. While on operations we walked all day and then dug a hole at night to sleep. At night we were on watch for 2 hours on and 2 off, so there wasn’t much sleep going on.

I have several memories that I will never forget. In April of 1967, we were on Operation Beaver Cage and were walking in 2 columns along a river-one column on each side of the river. All of a sudden we were hit by automatic fire-snipers and mortars. The whole hillside seemed to move with camouflaged North Vietnamese Army (NVA) soldiers. I was on the opposite side of the river as the ambush and saw many Marines go down. We returned fire and called in air support. The firefight lasted for hours. The next day we had to pick up our dead. The thing I remember the most is how quiet it was after the action. There wasn’t even a bird tweeting. I had a minor shrapnel wound and went back to the ship for a day to get stitched up. We had 55 killed and 151 wounded in that operation.

On May 18 we were aboard a ship and got up at 4am for our customary steak and egg breakfast the Navy cooked for us the morning of an operation. We were going on Operation Beau Charger which was the first authorized American entry into the DMZ. We were landing 3 miles from North Vietnam. My group took off at about 9:00am and by 9:15am bullets were ripping through the chopper. Contrary to popular belief Vietnam is not all jungle. We landed in open sandy terrain with large scrub-covered sand dunes. My platoon was in the open walking towards some large dunes when the fire opened up and guys were dropping all around. I was carrying a radio at the time because our radio operator had been killed. The Platoon Commander told a group of us to charge the dune head-on. I took off the radio so I could run quicker and my squad did as we were told. I was running and firing next to the squad leader and he went down. He had been shot in the foot and couldn’t walk. He was laying in the open so I threw him over my shoulder and started running for a small ditch about 18 inches deep. The next thing I know I’m laying on the ground with no idea how I got there. I could feel blood running down my back and realized I had been shot. It turns out that a bullet went through the squad leader’s arm and through my flack jacket into my chest. I was able to make it a few more yards to the ditch. My squad leader made it but to this day I feel guilty about not picking him up the second time and getting him to that ditch. A Marine should not leave another Marine behind. In that operation 8 out of the 12 men in my squad were killed or wounded. A total of 142 were killed and 896 were wounded.

We were both flown to the Hospital Ship USS Sanctuary for treatment. I spent nearly 2 months in the hospital and he got sent back to the States. It took me 30 years to find him but I finally did and we talk on the phone about every month or so.

After my hospital stay, I was sent back to my unit to finish my tour but got a 3rd relatively minor shrapnel wound a few months later and left Vietnam.

I spent the rest of my time in the Corps in California and 2 years on the island of Guam. I was discharged as a Sergeant in 1970.

After I got out I went back to college at Long Beach State University and got a Bachelors Degree. I worked as a fireman in Southern California for nearly 10 years and then moved to Australia in 1982. I am now retired and live a quiet life near a small rural town in Queensland.

I am proud of being a Marine and my service in Vietnam. I am proud of the 3 Purple Hearts and other medals I have earned. It took me longer than it should have to get that pride because of the way Vietnam Veterans were treated upon their return and for years after. I experienced this first hand and for years did not mention that I was a Vet. I hope veterans are never treated like that again. People who have never experienced combat can not possibly understand it. We were just doing our job-it was not a political issue. I can honestly say that I never thought about which politician was responsible while I was in the combat zone. I only worried about the guys next to me and my own survival.