The Men Who Fought in the Battle of Belleau Wood 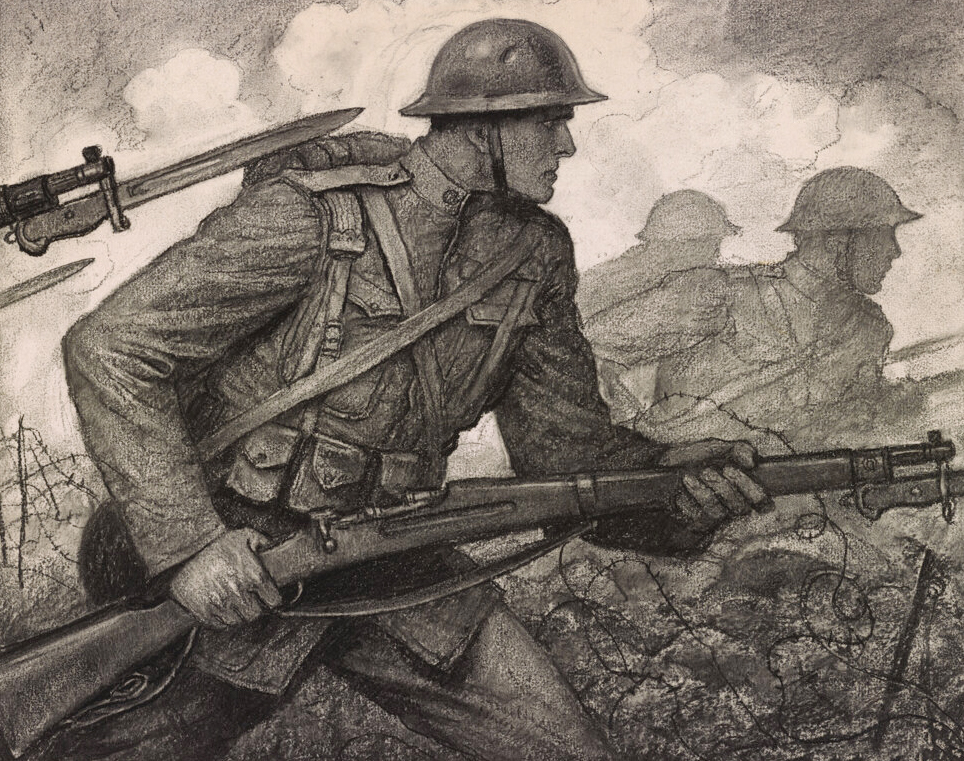 In June of 1918, a fierce battle was waged at Belleau Wood, an ancient hunting-reserve of old-growth oaks, surrounded by wheat fields, located about 60 miles outside of Paris. The Germans were launching their spring offensive to overwhelm the Allies before they were fortified by fresh American troops. The Americans were arriving at a rate of about 250,000 per month. The Battle of Belleau Wood has since achieved near-mythic status in U.S. military history, particularly for the U.S. Marines.

Founded in 1775 during the American Revolution, the U.S. Marines Corps had a reputation for discipline, excellent marksmanship, and, as the Germans would find out at Belleau Woods, tenacity. During the Great War, they were also very young. A The New York Times article from July 1918 cites a report stating that “nearly one-third of the recruits obtained by the Marine Corps since the United States entered the war were under twenty-one years of age.” The article goes on to quote Secretary of the Navy Josephus Daniels: “The policy of the Marine Corps in admitting boys of eighteen years and over into the ranks is more than justified by the heroic fighting by the Marines at Chateau-Thierry and Belleau Wood.”

Heroism of Young Soldiers in the Battle of Belleau Wood

In the weeks of fighting at Belleau Wood, this heroism was demonstrated time and again. When met with retreating French troops who asked why the Americans were not also falling back, Capt. Lloyd Williams responded, “Retreat? Hell, we just got here.” In the early days of battle, the Marines charged through the fields surrounding Belleau Wood and into German machine gunfire. As they struggled across the fields, their comrades falling around them, one gunnery sergeant cried out, “Come on, you sons of bitches! Do you want to live forever?” Once they were in the wood, the dense growth and intense fighting made the arrival of reinforcements, food, or medical care impossible. By the battle’s end, 1,811 U.S. Marines had been killed, and another 7,966 were wounded.

Who Were These Men Who Fought So Bravely and Ferociously?

One of the more well-known veterans of that confrontation was writer Laurence Stallings, who lost a leg at Belleau Wood. After the war, Stallings co-wrote the play, What Price Glory? In addition to his work as a critic and a screenplay writer, compiled a survey of the American Expeditionary Forces called “The Doughboys.” Pvt. Albert McArdle of East Boston was awarded the Distinguished Service Cross for exceptional bravery in action. The Boston Daily Globe reported that Pvt. McArdle, “while dressing the wounds of a man in the front trench first aid station at Belleau Wood, was shot through both thighs, but as his patient was desperately in need of emergency care, he completed the work that saved the man’s life before he staunched his own wounds.”

Aside from these notable veterans, there are hundreds of others who were wounded and killed in that dense, dark forest in France. An article in The New York Times from July 26, 1918, claims that casualty lists given out the day before were “the heaviest for New York yet issued.” It goes on to list those killed, wounded, and missing from Belleau Wood and other campaigns in the area. In reading the brief background of each fallen man, a deeper story beyond the statistics of war begins to take shape.

“He was a happy boy when he received a notification to go to Camp Upton,” said Mrs. Alice A. Harper, mother of severely wounded Roland Harper of Brooklyn, NY, “He said at that time he was glad to get the chance to get a crack at the Kaiser.”

Before he was killed in action, Gunnery Sergeant Gerald R. Finnegan of Boston wrote to his cousin that “the whistle of German lead sounds better than music.” Another Marine killed in action, Corporal William Fanning, enlisted after he saw a “first-to-fight” Marine recruiting poster. According to an uncle, when Fanning’s brother Patrick learned of his death, “he went out at once to find a Marine recruiting office.”

Twenty-five-year-old John Enamenger, severely wounded at Belleau Wood, was drafted in the fall of 1917, “and did not claim exemption, although he had a 2-year-old daughter.” The casualty lists that rolled in week after week printed the names of hundreds of other clerks, bakers, printers, factory workers, tailors, fathers, sons, and brothers.

Following the battle, the French renamed Belleau Wood “Bois de la Brigade de Marine” or “Wood of the Marine Brigade.” In 1923, Belleau Wood was dedicated as an American Battle Memorial. After the American flag was raised, Marshal Ferdinand Foch, the Supreme Allied Commander during the final year of WWI, was reported to have “tears rolling down his cheeks” as he assured the gathered relatives of the American dead that “the men who died here are safe; they will be guarded by us religiously.” Maj. Gen. James G. Harbord, commander of the Marines, spoke as well: “This scarred and shell-shot ground has brought undying fame to the Marine Brigade and their comrades of the Second Engineers.”