The Last Stand Of The Glorious Glosters 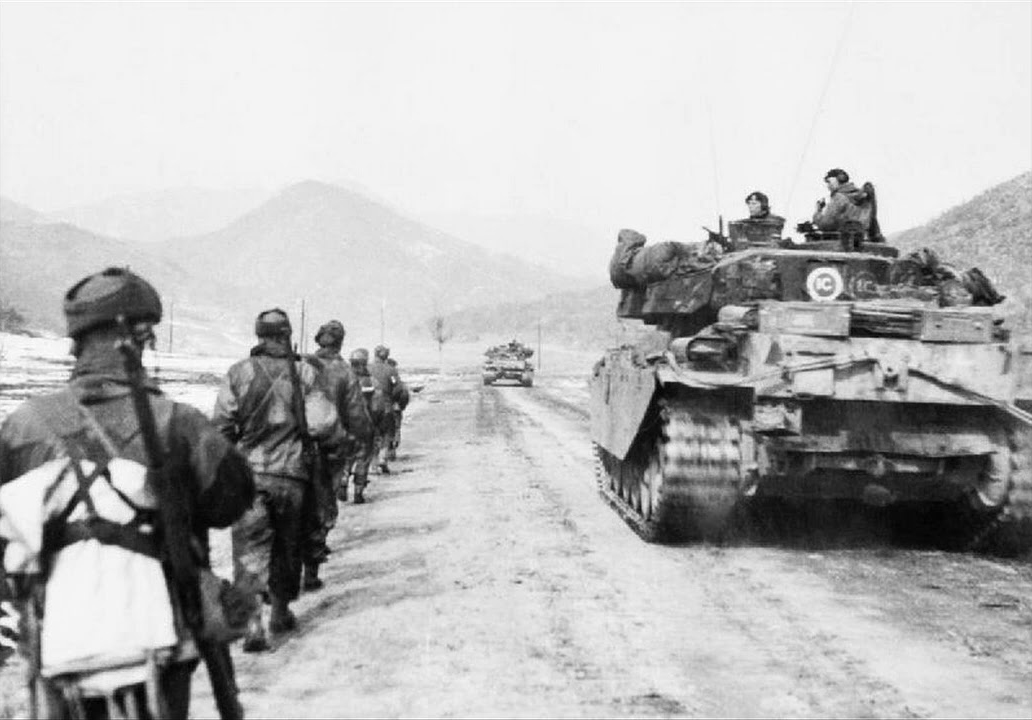 By April 1951, the Korean War had raged for nearly a year. The initial assault by North Korea into separate South Korea had been driven back to the 38th parallel – the border between the two nations. The North, aided by Chinese soldiers and Soviet resources, was still intent on conquering the South. United Nations troops, predominantly American but including forces from elsewhere in the world, were protecting the South.

The Communist Army had been weakened by supply problems over the winter, but by March they had recovered and been reinforced. As UN troops under General Ridgway pushed north in the center, the Communists massed to attack in the west, where UN troops were deployed in defensive positions along the Imjin River.

This stretch of the UN line was held primarily by the British 29th Brigade, led by Brigadier Brodie. Belgian forces guarded their right flank.

With the majority of UN troops concentrated for Ridgway’s advance, Brodie’s forces were thinly spread. His four battalions were responsible for holding 12 miles of the front. To do this they had to spread out, leaving gaps in the line. Most of the soldiers were on the south bank of the Imjin, while some held the hills behind them. The Belgians were stationed on the north bank.

Meanwhile, the 187th, 188th and 189th divisions of the 63rd Chinese Army were mustering to the north.

Peng Dehuai, Commander-in-Chief of the Chinese and North Korean forces in the field, was careful in preparing his attack. Over the first three weeks of April, he mustered his men within striking distance of the Imjin, carefully hiding these preparations from both ground and air spotters.

Meanwhile, the 29th Brigade was patrolling north of the river, beyond the safety of its own lines. Infantry columns supported by Centurion tanks harassed the Chinese rearguard tasked with concealing Peng’s preparations.

Despite Peng’s efforts, word reached the UN commanders that their enemies were preparing some sort of attack. A broad advance against the Communists was halted and the flanks were put on high alert.

On Saturday the 21st of April 1951, Peng sent reconnaissance and infiltration groups across the Imjin. He was ready to attack.

The expected assault came on the night of the 22nd of April. Because of UN air superiority, the Chinese waited for the cover of darkness. At 10.20pm, they hit the Belgians stationed north of the river. At the same time, British troops of the Gloucestershire Regiment, the “Glorious Glosters” ambushed a Chinese advance across the Imjin.

That night’s advances consisted mostly of probing attacks, as the Chinese tested the deployment and resolve of the UN forces. But as Chinese troops moved up in preparation for a full assault planned for the following night, they came into contact with the British. The Glorious Glosters found themselves attacked on both left and right flanks, the 5th Fusiliers were forced from some of their defensive positions, and the gun line was threatened.

The Success of the 1st Battalion, Royal Ulster Rifles

The 1st Battalion, Royal Ulster Rifles (1 RUR) was given the task of holding the bridges connecting the British with the Belgians. But the Chinese were there ahead of them, taking the bridges. The Belgians were attacked again and again throughout the night, their position isolated from other UN forces.

The already ragged line was starting to fracture. It looked as if the Chinese might shatter their foes.

The 1st battalion RUR had more success in another task given to them – holding a track that was the force’s main line of communication on the right flank. They held its entrance, along with an intermediate pass, throughout the night of the 22nd of April.

When dawn broke on the 23rd, the fighting continued. Despite the arrival of UN air power, the Chinese continued their attacks, slowly pushing back the British troops. Guns were sent back behind the lines to avoid being captured. Engineers fought as infantry. Tanks of the 8th Hussars launched local counter-attacks but could not halt the advance.

Under relentless pressure, the Fusiliers were driven from the last of their original positions. The Belgians and the British lost sight of each other.

American soldiers tried to retake the bridge that connected the Belgians with their allies. This attack failed but distracted the Chinese in that part of the battlefront. The Belgians shot their way out of the trap the Chinese had them pinned in, escaping from the fray.

Throughout the 23rd and 24th of April, the Glosters and RUR held onto the tracks that would allow a retreat from the Imjin. Attacks on the night of the 24th drove the Fusiliers back even further, while the RUR hung on tenaciously to their vital position.

By 25 April the Glorious Glosters were surrounded. American troops sent to relieve them were too little and too late.

The Glosters made a valiant attempt to break out, leaving the wounded behind with the padre and the medical officer. But only two small groups made it through the Chinese forces and linked up with the American rescue sortie. The rest were taken prisoner.

Meanwhile, the RUR led a retreat on the other flank. In a running battle down the track and across the hills, they got most of the remaining British troops out of the area around the Imjin.

On the far side of the hills, they joined the new UN line. Brodie had lost 20% of his men but had held up three Chinese divisions for four crucial days, allowing his comrades to reform. After a night’s rest, the 29th Brigade returned to the war.