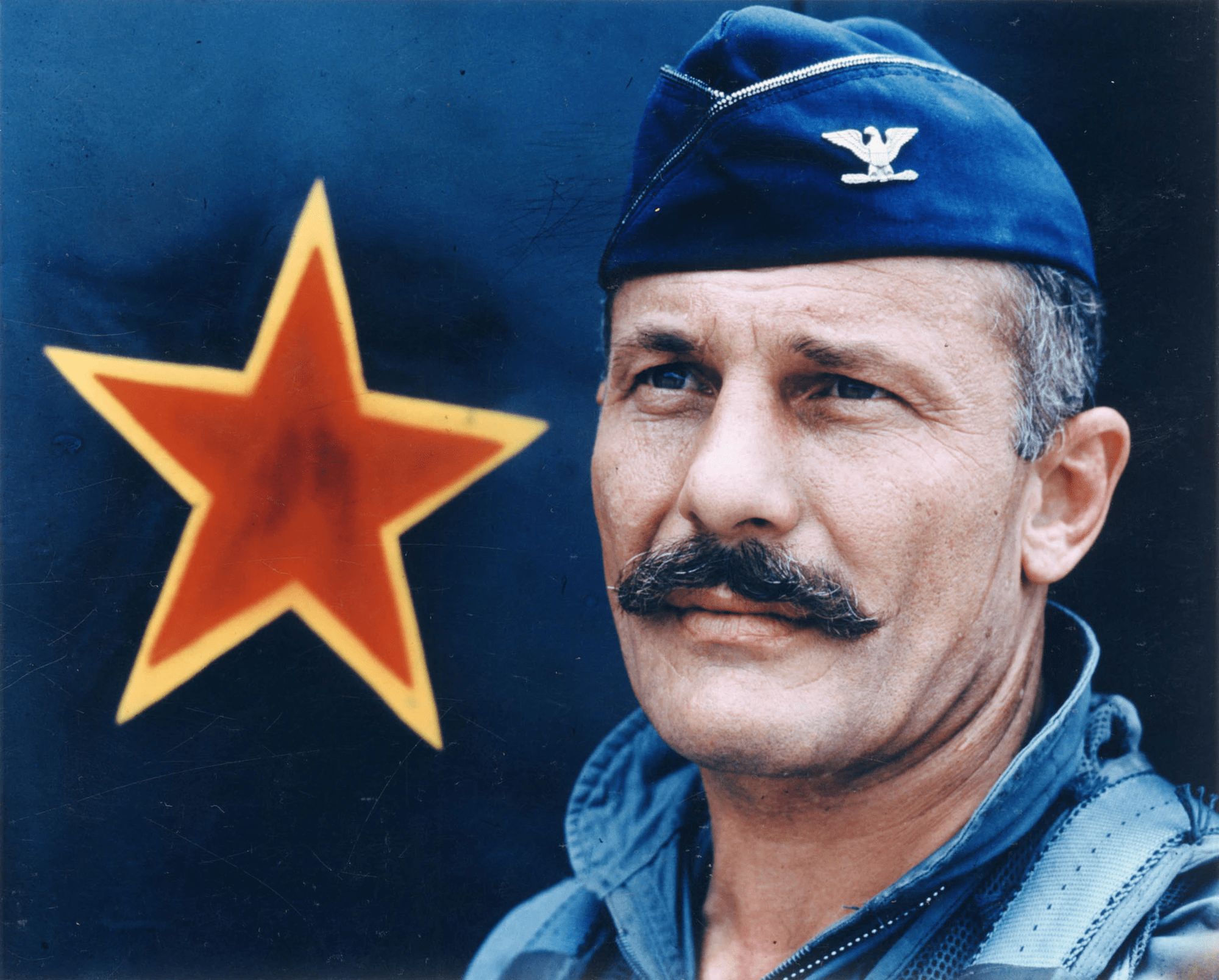 Every November for the past few years, more and more American men are adopting the custom of growing out their mustaches to raise awareness about men’s health issues. “Movember,” as it’s come to be called, raises awareness on such topics as prostate cancer, testicular cancer, and men’s suicide.

“Mustache March” is a Military Tradition to Honor Robin Olds

The men of the United States Air Force adopted a similar custom, except theirs comes in March and for a very different reason. “Mustache March” is a military tradition to honor one man: fighter pilot, World War II triple-ace, and Vietnam War legend Robin Olds.

Robin Olds was, without a doubt, one of America’s greatest fighter pilots. He was the son of an Army Air Corps captain who hung out with a virtual who’s who of Air Force legends: Billy Mitchell, Hap Arnold, Carl Spaatz, and Eddie Rickenbacker, just to name a few.

When Olds came of age, he attended the U.S. Military Academy at West Point (where he played football) and graduated just in time to enter World War II behind the stick of his P-38J Lightning. He was Maj. Robin Olds with 13 kills and a squadron commander before age 23.

By the time the war in Vietnam rolled around, Olds was a colonel in the U.S. Air Force, having made the jump when the Air Force became a separate branch in 1947. He deployed to Southeast Asia as commander of the 8th Tactical Fighter Wing, nicknamed “the Wolfpack,” at Ubon Royal Thai Air Force Base.

Why Mustache March Matters To Airmen

Olds was rubbed the wrong way by what he saw as an Air Force dominated by World War II bomber pilots who neglected fighters at their own peril. He was hamstrung by restrictions on tactics, was constantly asking for training and better fighters, and was put off by the public relations aspect of the war.

In 1965, Olds began growing out what he dubbed his “bulletproof” mustache. According to his biography, it was a figurative middle finger to the news media and his uncaring superiors that he wore unapologetically in Southeast Asia.

“Generals visiting Vietnam would kind of laugh at the mustache,” Olds once said. “I was far away from home. It was a gesture of defiance. The kids on base loved it. Most everybody grew a mustache.”

It was one legend that lived up to the mythos. Olds was restricted to flying 100 missions over Vietnam but certainly flew more. He also only claimed four air-to-air kills against the North Vietnamese Air Force but purposely stopped short of being an ace – the Air Force would take away his command for fear of losing him in combat.

To be clear, he definitely shot down more than four enemy fighters in Vietnam but only claimed four.

His biggest coup came in 1967 when he devised a way to fool communist fighters into believing they would be intercepting a group of slower, less maneuverable F-105 Thunderchief bombers. Using a massive fleet of F-4 Phantoms, Operation Bolo used electronic warfare pods to fool enemy ground radar into seeing what they believed were F-105s.

When North Vietnamese MiGs scrambled to intercept them, all they found were Olds and his Wolfpack flying F-4 Phantoms. Olds and his squadrons downed seven enemy aircraft that day, proving the superiority of American air power.

When Olds was promoted and reassigned to the Air Force Academy in 1968, Air Force Chief of Staff Gen. John McConnell stuck his finger on the ‘stache and ordered Olds to “take it off.” It was the end of Olds’ mustache, but inspired airmen have been growing their own “bulletproof” facial hair in his honor ever since.