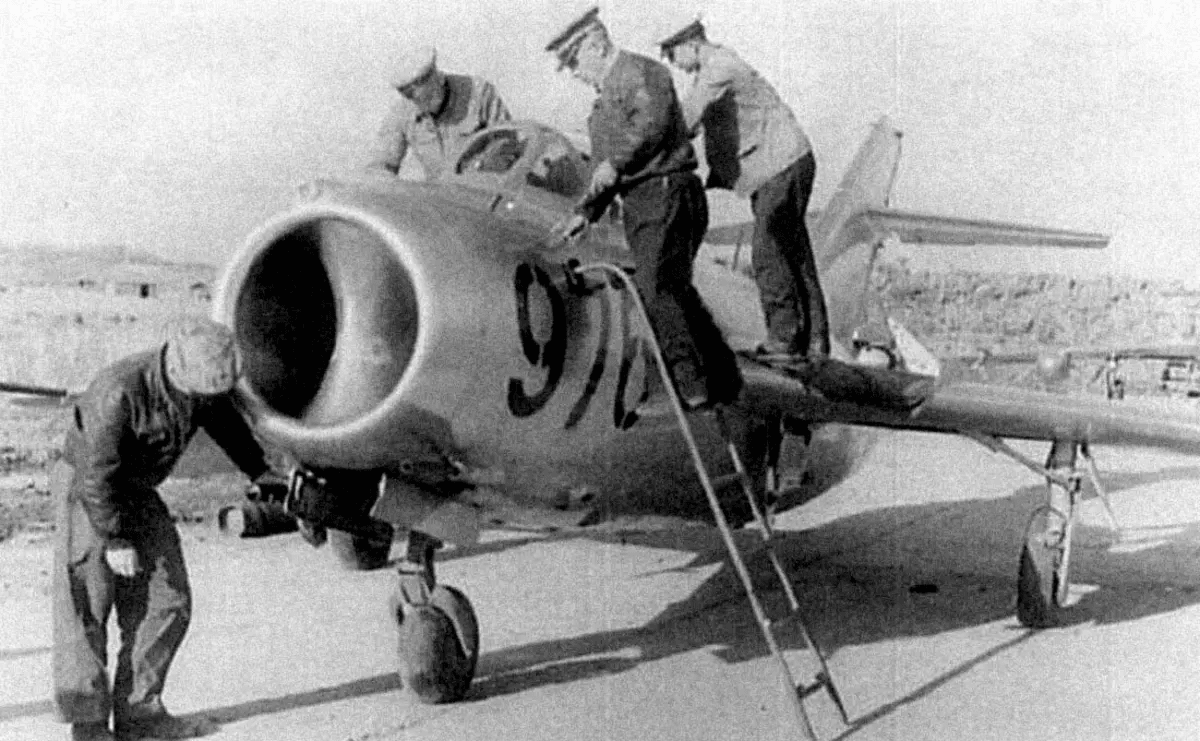 Jet fighters first made an appearance in the German Luftwaffe during World War II, but the technology had come a long way by the time the Korean War started in 1950. At first, the North Korean air forces were flying Soviet-built propeller-driven fighters, and the United States forces were flying American-made P-51 Mustangs and Vought F4U Corsairs. As the war dragged on, both sides got substantial upgrades.

When the Korean People’s Air Force started flying the MiG-15, it was clear that the propeller fighters were outmatched by Soviet-built aircraft and Soviet-trained Chinese and North Korean pilots. MiG-15s were very good at intercepting B-29 Superfortress bombers and engaging their fighter escorts. They wreaked havoc on prop fighters. They were faster and more numerous than anything the United Nations forces could muster.

While the F-86 Sabre was sent to Korea to counter the growing MiG-15 threat, they would not arrive until December 1950. Until then, the U.S. Air Force would use its F-80 Shooting Stars against the mysterious new aircraft. The MiG-15 first appeared on Nov. 1, 1950, but it didn’t take long for the USAF’s pilots to take one down.

Lt. Brown Blasted The Swifter Enemy Jet Out Of The Sky

Brown was flying his F-80 Shooting Star while escorting bombers on runs against North Korean cities along the Yalu River between Nov. 4-7. Only one of those targets, an airfield near Sinuiju, had to be aborted due to weather. The attack would be made the next day. Brown and the other fighters would make strafing runs against the North Korean anti-aircraft guns before the bombers destroyed the airfield.

When the time for the attack came, they made their runs and climbed to 20,000 feet to avoid anti-aircraft fire from across the Yalu inside China and cover the other fighters making their runs. As the next flight completed its mission, the flight commander saw a dozen MiG-15s doing barrel rolls and other stunts 2,500 feet below them.

There were also two MiGs coming straight at Brown and his wingman, Lt. Col. Evans Stephens. With the two MiGs bearing down on them, Brown and his commander broke formation to engage the enemy fighters. Brown had just engaged in the first-ever jet-to-jet aerial dogfight in history.

The MiG banked quickly into a climbing turn, but Brown and his Shooting Star stayed tight in the turn while Brown got into a firing position. He had only one gun left, as his other three jammed during his strafing mission. Four quick bursts missed the enemy MiG, but Brown was still on him.

After the enemy fighter went into a steep dive, Brown followed him and got within 1,000 feet before firing off another burst from his remaining guns. The first burst hit home, tearing up the engine section of the MiG, so Brown held down the trigger until the MiG exploded.

Now hurtling down to Earth at 600 miles per hour with just 2,000 feet between him and oblivion, Russell J. Brown managed to pull the Shooting Star out of its dive and regained his altitude. The total time spent in combat was a mere 60 seconds. It would also be Brown’s only kill of the war.