The Wreck of the First U.S. Navy Destroyer Jacob Jones Has Been Found 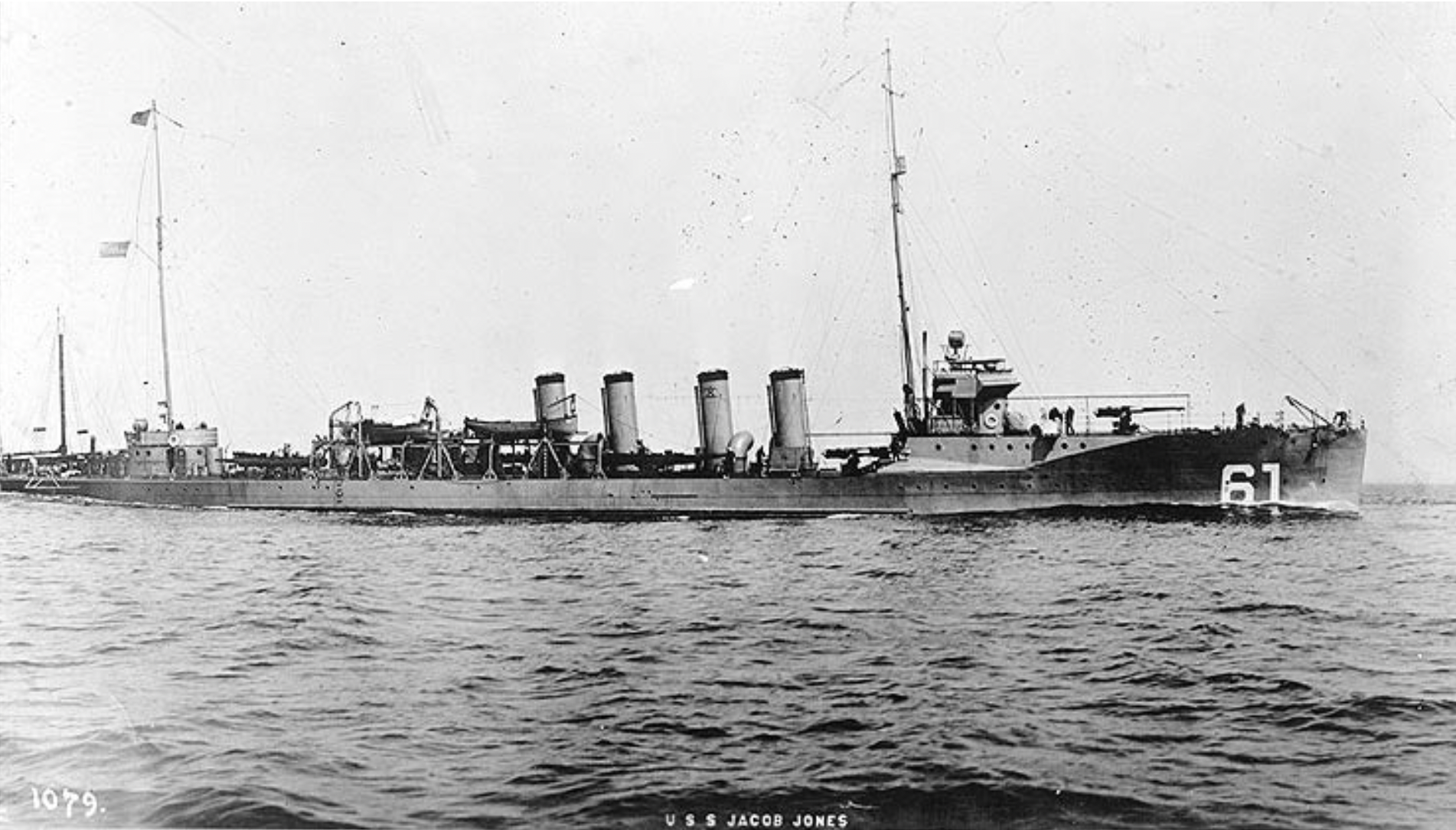 Just 40 miles off the coast of the Isles of Scilly, in the southwest of England, a team of expert divers located the wreck of the USS Jacob Jones (DD-61). The Tucker-class destroyer was built prior to WWI and was sunk on December 6, 1917, by a German submarine. Of her crew of seven officers and 103 men, 2 officers and 62 men lost their lives according to the U.S. Navy’s Naval History and Heritage Command. The Jacob Jones was the first American destroyer lost to enemy action.

On April 6, 1917, when America declared war on Germany, the USS Jacob Jones was on patrol off the Virginian coast. The next month, on May 7, she set sail for Europe. Ten days after departing her homeport of Boston, Jacob Jones arrived in Queenstown, Ireland and began patrol and convoy escort duties in British waters.

On December 6, 1917, Jacob Jones departed Brest, France, for Queenstown. At 1621 hours, she spotted a slight torpedo wake one thousand yards away. Despite taking evasive action, the torpedo struck the destroyer’s starboard side three feet below the water line. The explosion ruptured Jacob Jones‘ fuel oil tank and detonated her depth charges as her stern sank. The captain, Cdr. David W. Bagley, gave the order to abandon ship.

In a display of honorable seamanship, the commander of the German submarine, Kapitan Hans Rose, surfaced and took two badly wounded Americans prisoner: Albert De Mello, Seaman second class and John Francis Murphy, Ship’s cook second class petty officer. Rose then radioed the American base at Queenstown and provided them with the approximate location of the remaining survivors and their drift. He requested only that rescue ships give him one hour to vacate the vicinity. The remaining survivors were rescued throughout the night and into the next morning.

The Ship’s Final Place Was Discovered in 2022

For over 100 years, the wreck of the Jacob Jones remained undiscovered. The ship’s final resting place was discovered in 2022 by the Dark Star dive team, including Dominic Robinson. “We found the vessel on our second day of diving to other wrecks in the area, but there had been many hours of research before hand,” Robinson said in a public statement. “On the day, five of us went into the water, and the ship was about 115 metres to the seabed and 110 metres to the top of the wreck. It was very clear that it was Jacob Jones immediately – you can see its name written on parts of the shipwreck.”

The discovery of the Jacob Jones brings closure to surviving family members of those lost on board, including Lt. J.G. Stanton F. Kalk. As the officer-of-the-deck, Kalk pulled men out of the water and distributed them among the life rafts following the ship’s sinking. He died of exhaustion and exposure and was posthumously awarded the Navy Distinguished Service Medal. Chief Boatswain’s Mate Harry Gibson (posthumously) and Chief Electrician’s Mate L. J. Kelly both received the Navy Cross as well as letters of commendation along with Chief Boatswain’s Mate Charles Charlesworth for their bravery during the sinking.

TogetherWeServed highlights the discovery of the USS Jacob Jones and other military myths and legends.