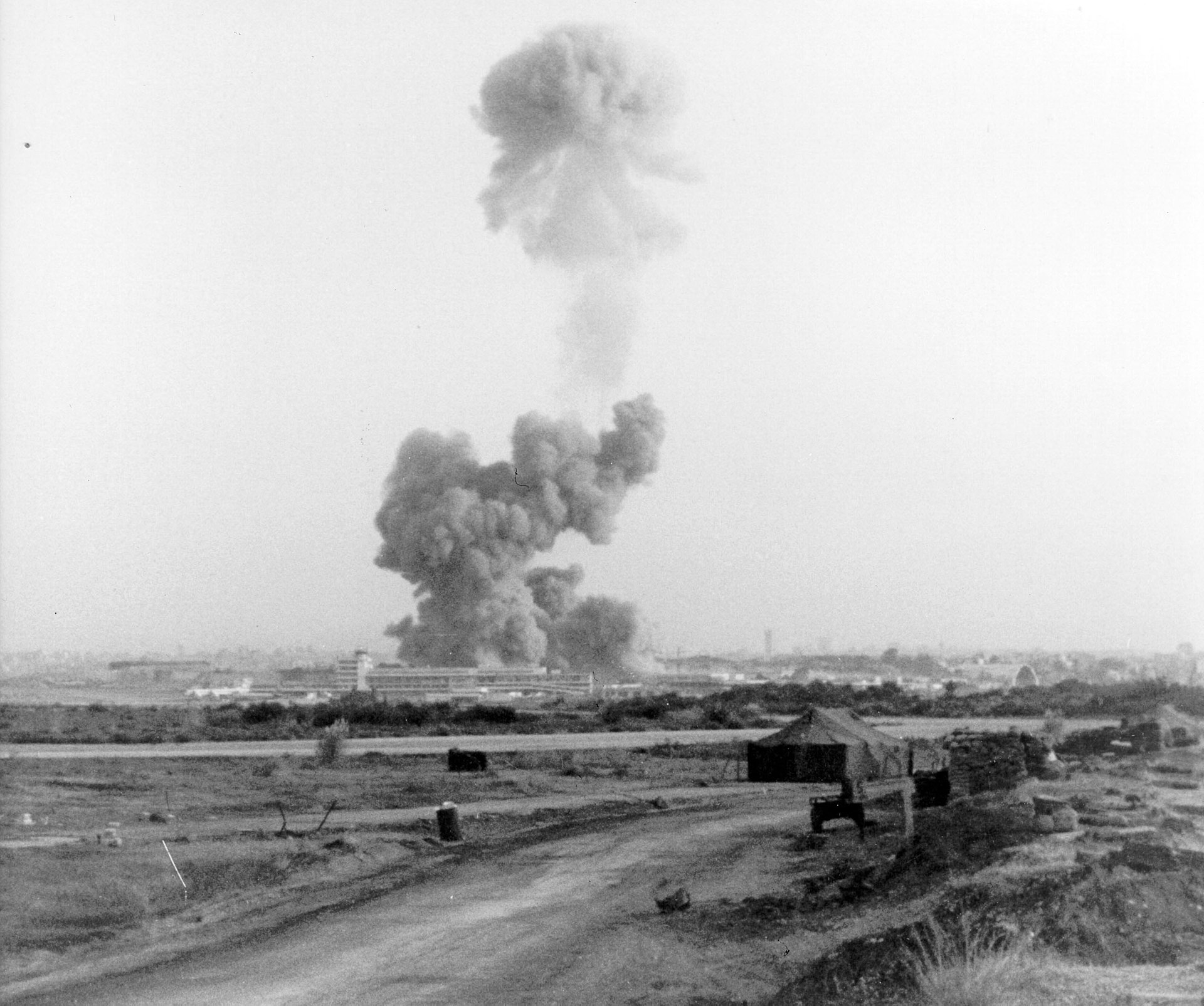 In 1975, a bloody civil war erupted in Lebanon, with Palestinian and leftist Muslim guerrillas battling militias of the Christian Phalange Party, the Maronite Christian community, and other groups.

During the next few years, Syrian, Israeli, and United Nations interventions failed to resolve the factional fighting, and in August 1982 a multinational force arrived to oversee the safe and peaceful withdrawal of Yasir Arafat and the PLO from positions within Beirut and ensure the safety of the Palestinian civilians that remained behind.

Withdrawal of the PLO was accomplished by early September, and the bulk of the multinational force soon withdrew to ships in the eastern Mediterranean Sea. However, the assassination on September 14, 1982, of Lebanese president-elect Bashir Gemayel-the Phalangist leader of the Lebanese Forces, a unified Christian militia – sparked a wave of violence. Christian militiamen retaliated for Gemayel’s death by killing hundreds of Palestinians (estimates range from several hundred to several thousand) at the Sabra and Shatila refugee camps. In the wake of the killings, troops were swiftly returned to Lebanon. It was the beginning of a problem-plagued mission that would stretch into months and leave hundreds of the multinational force dead and wounded.

In 1983 There Were Two Bombings of Beirut

The first target, on April 18, was the U.S. embassy, where 63 people, including 17 Americans, were killed and wiped out the CIA’s Middle East bureau.

Half a year later, on October 23, the terrorists struck again, this time at barracks that housed members of an international peacekeeping force sent to help restore order in the war-torn nation. Killed in this second attack were 242 Americans.

Aftermath of the Bombing of Beirut

Less than ten minutes later, a similar attack occurred against the barracks of the French 3rd Company of the 1st Parachute Chasseur Regiment, 6 km away in the Ramlet al Baida area of West Beirut. As the suicide bomber drove his pickup truck toward the “Drakkar” building, French paratroopers began shooting at the truck and its driver. It is believed that the driver was killed, and the truck was immobilized and rolled to stop about fifteen yards from the building. A few moments passed before the truck exploded, bringing down the nine-story building, killing 58 French paratroopers.

Many of the paratroopers had gathered on their balconies moments earlier to see what was happening at the airport. It was France’s worst military loss since the end of the Algerian War in 1962.

Until September 11, 2001, the October 1983 assault would remain the most devastating terrorist attack on American citizens, and it remains the bloodiest terrorist assault on Americans outside of the United States. The group Islamic Jihad, affiliated with Hezbollah and ultimately Iran, claimed responsibility for both attacks.

Following is a detailed, well-written minute-by-minute account of the bombing told by eyewitnesses to the terrorist attack: Dawn broke over Beirut at 0524 local time on Sunday, October 23, 1983.  The temperature was already a comfortable 77 degrees F, but perhaps a bit warm for 24th Marine Amphibious Unit (MAU) sentries posted around the perimeter of the MAU headquarters compound at Beirut International Airport. They were in full combat gear–helmets, upper body armor–and carried individual weapons. Since it was Sunday, the compound was relatively quiet for a modified holiday routine was in effect. Reveille would not go until 0630, and brunch would be served between 0800 and 1000. In the afternoon, there would be time to write letters, read, and perhaps toss a football about. In the afternoon, there might be a barbecue–hamburgers, hot dogs, and all the trimmings.

Relatively little traffic was observed in the early morning hours on the airport road, which runs between Beirut and the airport terminal. This road is just west of and runs parallel to the MAU compound. The Marines had been warned to be alert for suspicious-looking vehicles, which might, in fact, be terrorist car bombs. And so Lance Corporal Eddie A. DiFranco, manning one of the two posts in front of and south of the building housing the headquarters compound and attached elements of BLT 1/8 (Battalion Landing Team 1/8, built around the 1st Battalion, 8th Marines), closely watched a yellow Mercedes Benz stake-bed truck, which entered the parking lot south of his post.

The truck circled the lot once, then departed, turning south at the gate and heading towards the terminal.

A little less than an hour later, at 0622, DiFranco saw what appeared to be the same truck enter the same parking lot. This time, the vehicle accelerated to the west, circled the lot once, then headed toward the wire barricade separating the parking lot from the BLT building. Turning right, it ran over the wire barricade and sped between Posts 6 and 7 into the lobby of the building, where it detonated with the explosive force of more than 12,000 pounds of TNT.

Lance Corporal Henry P. Linkila, who heard the truck as it sped across the concertina fence, inserted a magazine into his M-16 rifle, chambered a round, and shouldered his weapon, but could not fire. The truck had already entered the building.

Lance Corporal John W. Berthiaume was guarding the fence just below the southwest corner of the BLT headquarters. He correctly guessed the truck’s mission but could not react in time either to fire at the truck or to take cover in his guard bunker. He was knocked to the ground by the explosion.

Sergeant of the Guard Stephen E. Russell was at the main entrance of the building at his post, a small sand-bagged structure that looked toward the back entrance of the building, when he heard the truck as the driver revved up its engine for the dash into the lobby. Russell turned to see the vehicle pass through the permanent fence encircling the compound and head straight for his post. He wondered what the truck was doing inside the compound. Almost as quickly, he recognized that it was a threat. He ran from his guard shack across the lobby toward the rear entrance, yelling, “Hit the deck! Hit the deck!” Glancing over his shoulder as he ran, he saw the truck smash through his guard shack. A second or two later, the truck exploded, blowing him into the air and out of the building. Severely injured, Russell regained consciousness and found himself in the road outside the BLT headquarters with debris from the explosion all around him.

It had finally happened. An explosive-laden truck had been driven into the lobby of a building, billeting more than 300 men, and detonated. The force of the explosion ripped the building from its foundation. The building then imploded upon itself, crushing or trapping most of the occupants inside the wreckage.

Many Lebanese civilians voluntarily joined the rescue effort. Especially important was a Lebanese construction contractor, Rafiq Hariri of the firm Oger-Liban, who provided heavy construction equipment including a 40 ton P & H crane from nearby BIA worksites. Hariri’s construction equipment proved vitally necessary in lifting and removing heavy slabs of concrete debris at the barracks site just as it had been necessary in assisting with clearing debris after the April U.S. Embassy attack.

While the rescuers were at times hindered by hostile sniper and artillery fire, several Marine survivors were pulled from the rubble at the BLT 1/8 bomb site and airlifted by helicopter to the USS Iwo Jima, located offshore.

When the last body had been retrieved from the ruins, and the final death count had been tallied, it reached a total of 241 Americans: 220 were Marines; the remainder, Navy medical personnel and soldiers assigned to the MAU. For the Marines, this was the highest loss of life in a single day since D-Day on Iwo Jima in 1945.

Within four months, elements of the multinational force began to withdraw to ships offshore, and on February 26, 1984, the last U.S. Marines left Beirut.

A U.S. investigation blamed lax security for allowing the bomber to get into the Marines’ compound.

Memorials to the Victims of the Beirut Bombing

In memory of the 241 American servicemen – 220 marines, 18 sailors, and three soldiers – killed in the October 23, 1983, Beirut barracks bombing in Beirut, Lebanon, a Beirut Memorial was officially dedicated on October 23, 1986. It is the site of an annual commemoration of the victims of the suicide attack that took their lives. It is located outside the gate of Camp Gilbert H. Johnson, a satellite camp of Marine Corps Base Camp Lejeune in Jacksonville, North Carolina.

In a moment of quiet reflection, Ed Ayers sat in front of a wall etched with the names of 241 Americans who were slaughtered 31 years ago when a suicide bomber drove a truck into a four-story military barracks in Beirut.

If you enjoyed learning about 1983 Beirut Bombing, we invite you to read about other battlefield chronicles on our blog. You will also find military book reviews, veterans’ service reflections, famous military units and more on the TogetherWeServed.com blog.  If you are a veteran, find your military buddies, view historic boot camp photos, build a printable military service plaque, and more on TogetherWeServed.com today.