Thunder Below! by Admiral Eugene B. Fluckey 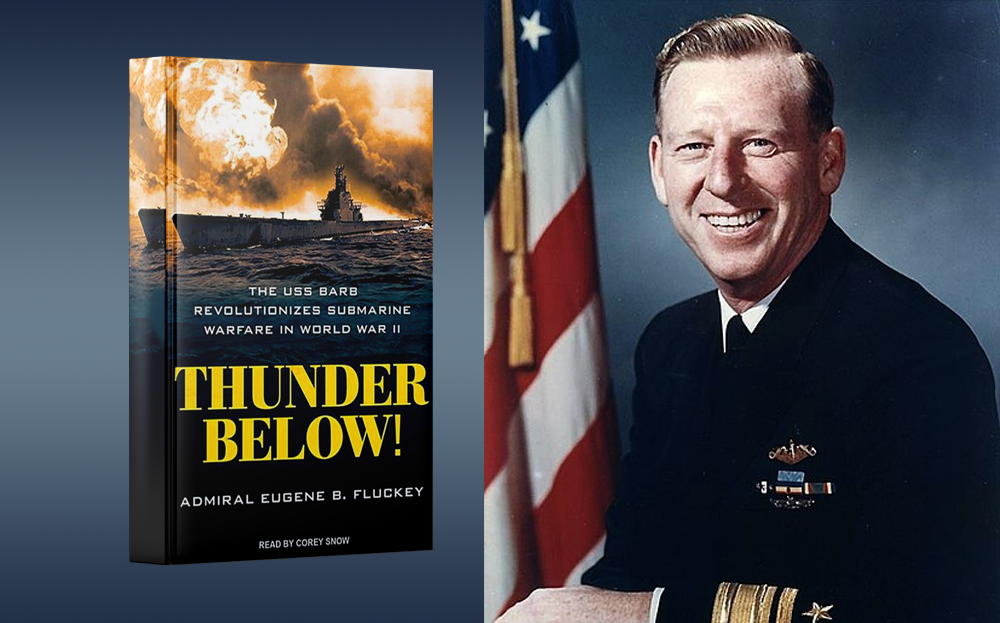 The thunderous roar of exploding depth charges was a familiar and comforting sound to the crew members of the USS Barb, who frequently found themselves somewhere between enemy fire and Davy Jones’s locker. Under the leadership of her fearless skipper, Captain Gene Fluckey, the Barb sank the greatest tonnage of any American sub in World War II. At the same time, the Barb did far more than merely sink ships-she changed forever the way submarines stalk and kill their prey.

This is a gripping adventure chock-full of “you-are-there” moments. Fluckey has drawn on logs, reports, letters, interviews, and a recently discovered illegal diary kept by one of his torpedomen. And in a fascinating twist, he uses archival documents from the Japanese Navy to give its version of events. The unique story of the Barb begins with its men, who had the confidence to become unbeatable. Each team helped develop innovative ideas, new tactics, and new strategies. All strove for personal excellence, and success became contagious. Instead of lying in wait under the waves, the USS Barb pursued enemy ships on the surface, attacking in the swift and precise style of torpedo boats. She was the first sub to use rocket missiles and to creep up on enemy convoys at night, joining the flank escort line from astern, darting in and out as she sank ships up the column. Surface-cruising, diving only to escape, “Luckey Fluckey” relentlessly patrolled the Pacific, driving his boat and crew to their limits. There can be no greater contrast to modern warfare’s long-distance, video game-style of battle than the exploits of the Captain and crew of the USS Barb, where the sub, out of ammunition, actually rammed an enemy ship until it sank. Thunder Below! is a first-rate, true-life, inspirational story of the courage and heroism of ordinary men under fire.

Reader Reviews of Thunder Below! by Admiral Eugene B. Fluckey

OK, I’ll admit to buying Thunder Below! by Admiral Eugene B. Fluckey against my better judgment. A lifetime around the military has made me very familiar with the “I love me” book put out by so many retired Officers. This is so NOT that book! If anything, this is an “I loved my ship” or an “I loved my crew” book; maybe it is a bit of both. Thunder Below is that truly unusual book – an Admiral’s memoir that does not paint him as the hero. The Barb is the heroine here. It is a book partly written by committee, or at least written with the help of the memories of as any of the crew as could be contacted by Admiral Fluckey, and yet it is seamless and cohesive. It is a book where you pretty much know the ending and still hold your breath as events unfold. And it is a book that is not afraid to admit that the Sailors and Officers were real people who laughed, played jokes, and even cried where appropriate. Thank you, men, of the Barb.
~R.C. Logan

This wonderful book about the record-breaking USS Barb is unique in its first-person voice and story of naval heroics for which we can be forever proud. The leadership skills during WWII submarine patrols in the Pacific demonstrated every day by the Captain (the author), and his officers were spectacular. The Captain’s abilities to communicate, teach, and inspire laced with compassion and a wry sense of humor were second to none; his receipt of the Medal of Honor commemorated his stunning achievements.

The closely aligned teamwork inspired by this leadership was the best I have ever seen in print. This top-rated sub managed to successfully coordinate torpedo, machine gun, 4 and 5 inch gun, and rocket attacks; they even successfully rammed an enemy ship for an astounding total of 30 major ships sunk and some 75 smaller vessels. Add to that a thrilling raid pulled off by a small team sent ashore to bomb a Japanese railroad, and you have one of the greatest adventure books of the last 30 years. Told in the first person with quotes from diaries and letters added liberally, the book is nearly alive in your hands, complete with terrific maps and photographs. A living, breathing gem of a story.
~Jack Sparacino

This book tells the life of the Officers and men of the submarine Barb in World War Two. One would expect a dry military jargon-filled book. The Captain of the submarine CPT Fluckey however, makes a spine-tingling tell. This book is very exciting to read and read like a Tom Clancy novel. The exploits of his crew during his five tours as commander are almost unbelievable. His tactics. Knowledge and detailed planning paid off for him and his crew. I highly recommend this book for anyone to read, not just military history buffs like me.
~Phil W

Eugene B. Fluckey, Rear Admiral, USN (Ret.), was a 1935 graduate of the United States Naval Academy. For his valor under fire, LCDR Fluckey was awarded four Navy Crosses and the Medal of Honor, unequaled by any living American. The crew of the USS Barb received the Presidential Unit Citation and Navy Unit Commendation. In 1989 the U.S. Navy honored Fluckey by naming the nuclear submarine Combat Systems Training Center, the largest and highest building in New London Connecticut, Fluckey Hall, the only building there named for a living person. His last active duty was as NATO Commander in Chief of the Iberian Atlantic Area in Lisbon, Portugal, from which he retired in 1972. In June 1991, he did the research for Thunder Below in remote villages on the coast of China. Of his many citations, Fluckey said he was most proud of, the one medal no member of his crew was ever awarded: the Purple Heart, given to those wounded under fire.

If you enjoyed learning about Thunder Below! by Admiral Eugene B. Fluckey, we invite you to read about other military book reviews on our blog. You will also find profiles in courage, veterans’ service reflections, famous military units and more on the TogetherWeServed.com blog.  If you are a veteran, find your military buddies, view historic boot camp photos, build a printable military service plaque, and more on TogetherWeServed.com today.