Vietnam War – The Battle of Hue 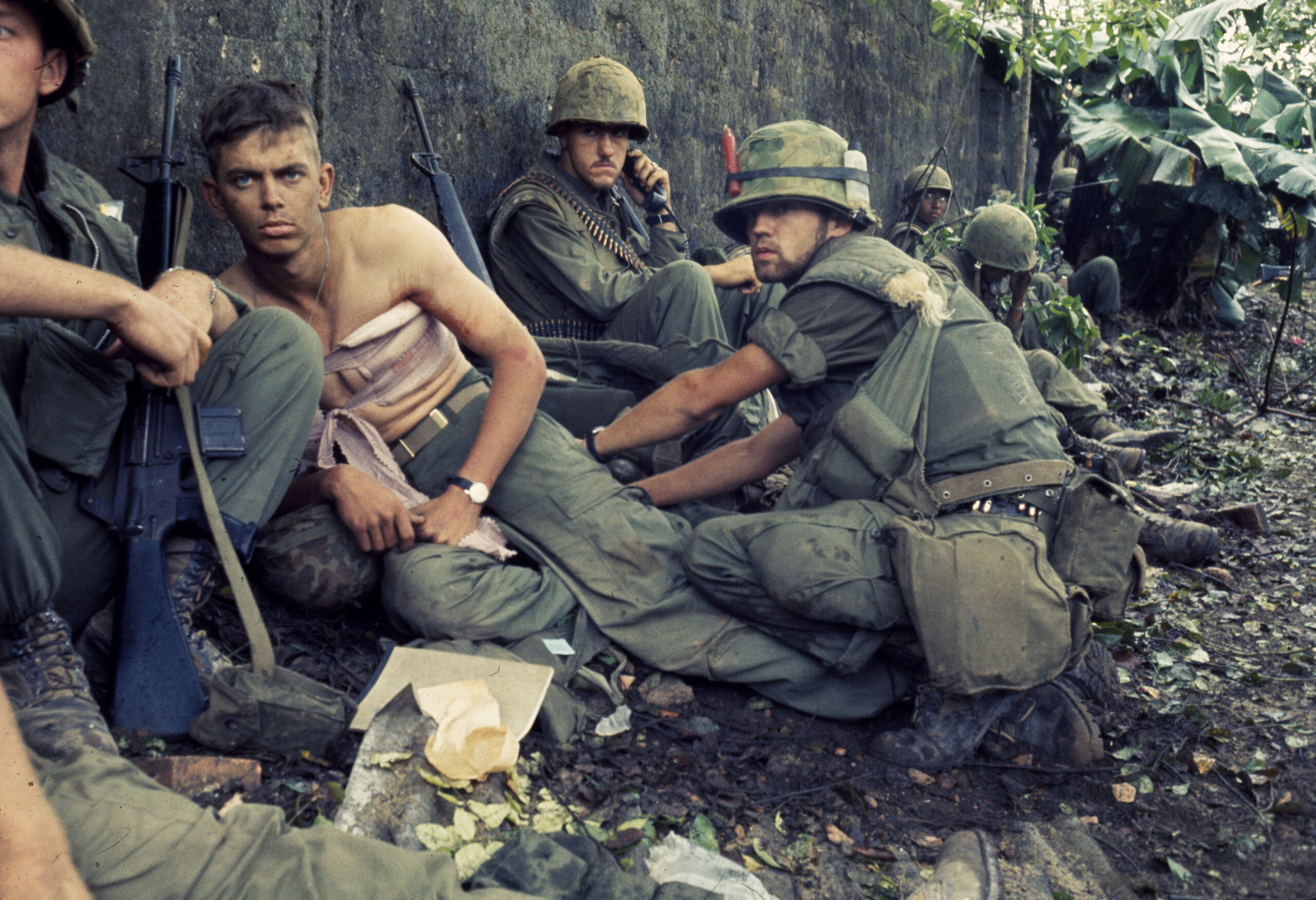 Another Leatherneck, a black-bearded machine gunner, led a charge up a mountain of rubble that had once been a stately tower, shouting: “We’re Marines, let’s go!”. These episodes illustrate the battle of the Hue Citadel – a grim, struggle through the courtyards and battlements of the old imperial fort. The fight pits U.S. and Vietnamese Marines, determined to take the Citadel, against North Vietnamese soldiers equally determined to hold it.

John Olson, a photographer with the Pacific edition of “Stars and Stripes” spent three days with the 3rd Platoon of Delta Company, 1st Bn, 5th Marines.

Attack of The Hue Tower Over the East Gate

Thursday morning, Olson said, the platoon moved forward through the narrow alleys and tree-lined streets of a housing area to attack the tower over the east gate. They dashed at a half-crouch into a courtyard but didn’t make it across.

Three Communist rockets crashed into the yard. The radio operator was blown nearly in half. Several other Marines were wounded. Eight men in the squad retreated to a vacant villa and fired back. A medic ran out to help the wounded and was hit in the legs and fell. A Marine scrambled into the courtyard, but an enemy sniper hit him in the neck as he cried for help.

An hour later, as the the Battle of Hue still raged, there were nine men in the villa, and three were wounded. They did not know where the other units were. They were down to several hundred rounds of ammunition, and the radio was lying in the courtyard on the pack of the dead radioman.

The machine gunner, a Lance Corporal, borrowed a knife, crawled forward, cut the radio free, and crawled back. But the radio wouldn’t work.

The small band of Leathernecks could hear the other platoons report to the company, but they couldn’t transmit.

“They’re coming around us, on both sides,” riflemen at the windows shouted as they saw North Vietnamese soldiers circling the house.

One badly wounded man began to recite the Lord’s Prayer. Another Marine, the one who had been hit in the neck, tried to comfort him. “Save your ammunition until they charge,” the Corpsman, a Navy man, advised the Marines.

Then he smashed the radio headset against the cement floor, turned the dial so that enemy soldiers couldn’t trace the frequency, and fired a round into the transmitter. When the enemy didn’t attack, the Corpsman told the others he was going for help. He disappeared through the rear door and was back in 15 minutes to say help was on the way.

A half-hour later, Marines of Bravo Company arrived and laid down a curtain of fire as the Marines in the villa ripped off doors to serve as stretchers and carried their wounded out. The platoon hadn’t made it to the east gate tower, but other Marines had.

They blasted their way along the wall and seized the massive stone structure. But the North Vietnamese counterattacked and drove them back. The Marines attacked again and held until 4 a.m. Friday. Then the North Vietnamese unleashed a thunderous barrage of rockets and recoilless fire and charged.

The enemy took the tower again, but now it was reduced to only a torn finger of stone protruding from a mountain of rubble that the Marines labeled “The Hill.” At daybreak, the Marines regrouped for another assault on “The Hill.”

At 9:30, they began scrambling up the shattered wall. The first five men to reach the top fell back wounded. The others stopped, crouching behind chunks of masonry. The black-bearded machine- gunner, cradling his weapon in his arms, stood up and shouted: “We’re Marines, let’s go!”

They reached the top  –  the tower – climbing over the bodies of Marines and North Vietnamese soldiers. They fought two hours to hold it. At noon, a Marine sniper cried out, “they’re running, put out some fire.”

Other Marines jumped up and began shooting at the North Vietnamese soldiers darting back through the ruins to another tower farther south.

UPI correspondent Alvin Webb Jr., who has been covering the Battle of Hue from the start, sent out the following dispatch: It is nine blocks from where I am sitting on the south gate of the wall around the Citadel. It may become the bloodiest nine blocks for the men of the United States Marine Corps since that other war in Korea when they fought and died in the streets of Seoul.

“Seoul was tough,” an old top sergeant who was there told me a few minutes ago. “But this  –  well, it’s something else.”

“Five snipers,” Capt. Scott Nelson of Florida said. “That’s all it takes to tie us down completely.”

You can hear the whine of the snipers’ bullets and the eerie whoosh of B40 rockets and feel the thunder of mortar rounds chewing up houses. I can catch glimpses from time to time of the walls of the imperial city, which protect the Palace of Perfect Peace. The North Vietnamese are using it as a fortress.

We move forward. We sweep into a building facing Nguyen Dieu Street behind a blistering blast of M16 fire and thunderous belches from tanks. We took the building and found a body inside. The man was wearing a khaki North Vietnamese Army uniform and carried two hand grenades made in Communist China.

If you enjoyed learning about the The Battle For Hue, we invite you to read about other battlefield chronicles on our blog. You will also find military book reviews, veterans’ service reflections, famous military units and more on the TogetherWeServed.com blog.  If you are a veteran, find your military buddies, view historic boot camp photos, build a printable military service plaque, and more on TogetherWeServed.com today.