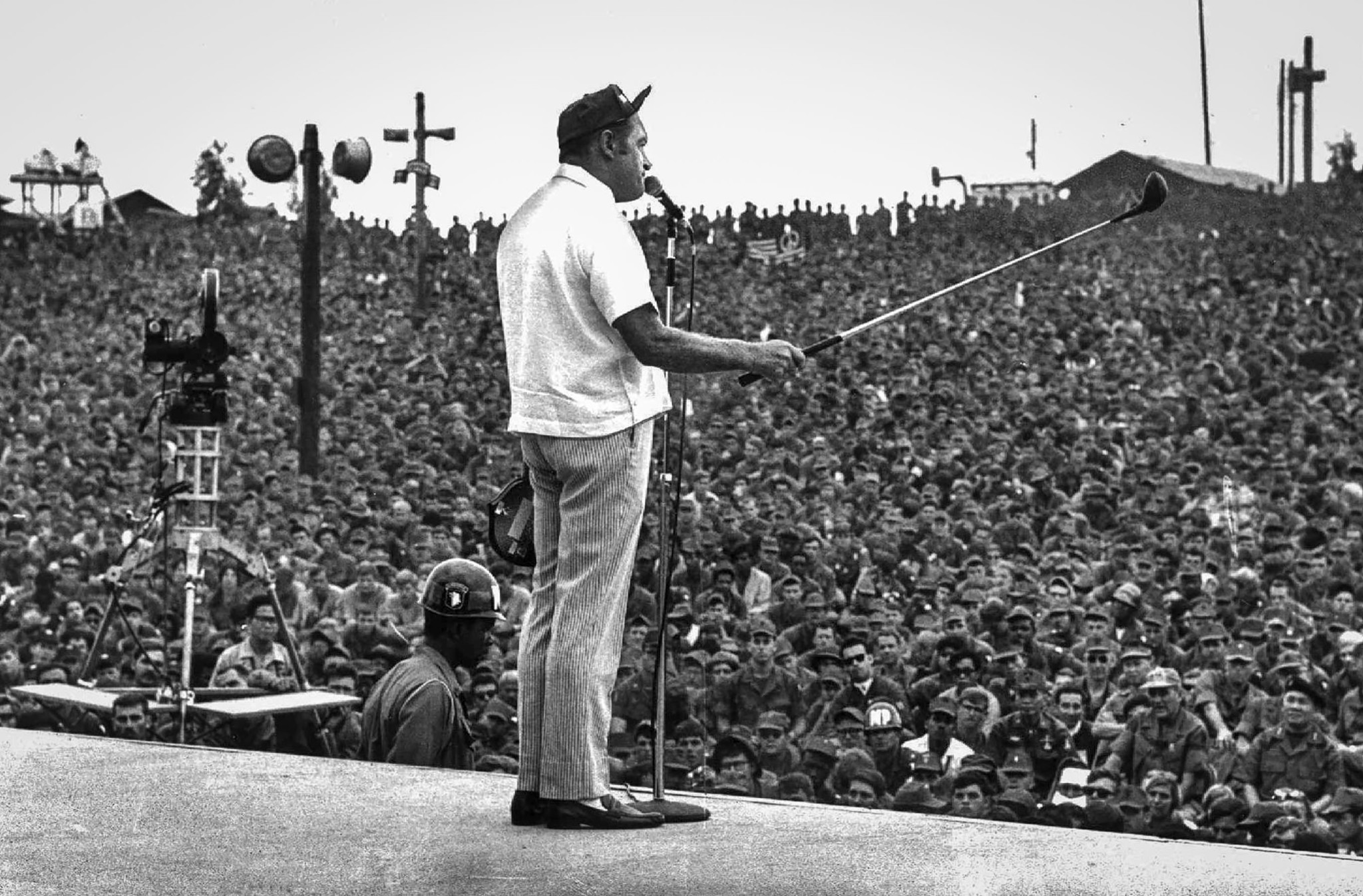 Anyone who is even vaguely familiar with the USO knows a little about the history of Bob Hope’ USO shows. Since 1941, the United Service Organizations has provided support to the service members of the United States military. At all stages of a service member’s active duty and even beyond, USO volunteers are ready to provide support.

Bob Hope’s USO shows were a staple for many decades, entertaining generations of military personnel in the United States Armed Forces.

Driving Force Behind the USO Tours

Though he wore many hats as an entertainer, starting out as a dancer, film actor, and radio comedian, Bob Hope is perhaps best remembered as the driving force behind the USO tours that featured the United States’ greatest entertainers traveling to show their support for the troops and lift the spirits of those fighting on the front lines. This tradition began in 1941, when he performed a radio show at March Field in Riverside, California. Fresh from his motion picture successes The Cat and the Canary (1939) and The Road to Singapore (1940), he was well received, and when the United States joined World War II in December of that year, he resolved to work with the USO to bring more shows to service members. Over the next 18 months, he traveled the length and breadth of the country performing at military bases, until he ventured overseas to the European and Pacific fronts to perform for troops stationed there.His Road to… co-star Bing Crosby also joined USO tours. As time went by and Hope’s shows became more of a staple, he assembled a team of regular collaborators: Tony Romano, the musician. Jerry Colonna, Hope’s sideman. Frances Langford, the singer.

After the conclusion of World War II, Hope continued his film career and successfully made the transition to television. While famously he never won an Academy Award, he was awarded honorary Oscars multiple times. During the Berlin Airlift in 1948 and again when the Korean War began in 1950, Hope joined the USO to support the men and women of the US Armed Forces. He was also a frequent visitor to American forces stationed in Southeast Asia during the Vietnam War, regularly seen with his trademark golf club. Hope’s holiday specials, a tradition started in 1950 on NBC, also became part of his commitment to the USO. Between 1964 and 1972, Hope recorded 9 holiday shows in Vietnam. The 1970 show was one of American television’s most-watched events of all time.

Hope was an unstinting supporter of the members of the US armed forces, even at times when their actions were unpopular with the public. During the Vietnam War, it was difficult for Hope to secure talent to travel with, but this did not deter him. He worked with Raquel Welch, Ann-Margret, Connie Stevens, The Golddiggers, even Neil Armstrong.

Why Did Bob Hope Do USO Shows?

Bob Hope’s first holiday USO show was in 1948, during the Berlin Airlift. According to Hope himself, this effort was undertaken because he was expressly asked by the Pentagon. However, his future undertakings with the USO were inspired by this trip and the warm welcome and gratitude from the servicemen and women in Berlin. Hope’s last holiday special ‘Hopes for the Holidays’ was in 1994, almost 50 years after his first.

Was Bob Hope A Veteran?

While the US Navy offered Hope a commission at the rank of lieutenant commander during the Second World War, Hope never served in the military himself. However, for his efforts over many generations to bring joy and recreation to military personnel both at home and overseas, the

United States Congress conferred the unique honor of being an honorary veteran on Bob Hope in 1997. Hope passed away less than six years later, on July 27 2003, at the age of 100.

For more stories about veterans and military history, check out our TogetherWeServed Blog.