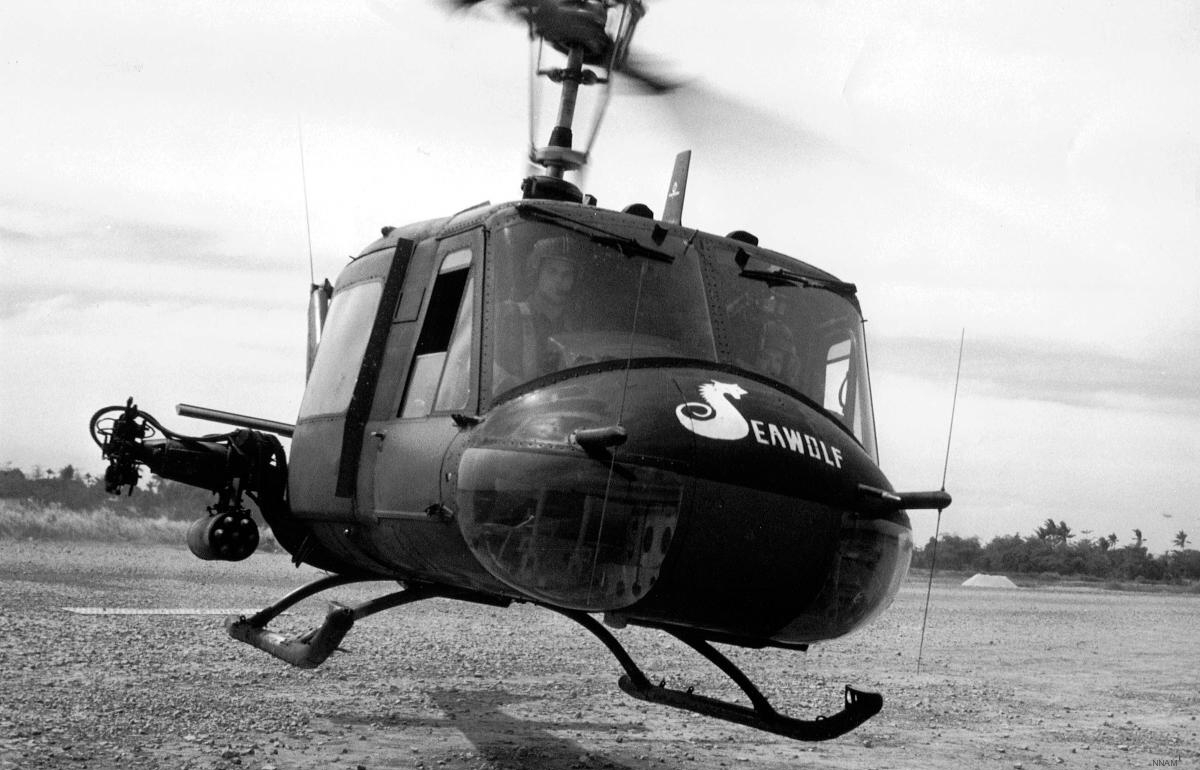 Steeped in the political turmoil of an unpopular war and faced with unfamiliar terrain, embedded enemy supply practices, and tactics keying on stealth, by 1965, the US faced new and novel threats from Viet Cong forces with no ready recourse. Striving for any means to achieve supremacy, the Army turned to tried-and-true tactics while seeking a breakthrough military strategy. The answer, formation of the all-volunteer Navy Helicopter Attack (Light) Squadron 3 (HA(L)-3), quickly renowned by their call sign “Seawolf.” Utilizing hand-me-down equipment acquired from the Army and newly trained personnel, HA(L)-3 would go on to become the most highly decorated squadron in naval aviation history.

During the squadron’s five-year tenure, the Seawolves flew more than 120,000 missions with two-hundred wounded and forty-four KIA, earning the following commendations and landmark recognition.

But just how was such unprecedented success possible in the face of antiquated equipment and the absence of both deeply experienced personnel and significant weapons technology. Still further, why did the HA(L)-3 remain a lesser-known chapter in naval aviation history for over 40 years?

Predating the Vietnam War, the Army had a principal interest in the use of helicopters for Search and Rescue, Medical Evacuation, and pioneering efforts in ground support operations. Though the Army had gained valuable experience in combat support tactics, it was constrained to daytime and clear weather conditions that severely limited practical applications. Meanwhile, with a bias for fixed-wing aircraft, the Navy constrained helicopters to replenishment, minesweeping, and anti-submarine duties. So, entering Vietnam, the military was not fully equipped or trained for operations that would be needed to prevail.

In 1965 there was recognition that Communist forces were infiltrating coastal and interior waterways of the Mekong Delta to supply one-third of all men and arms while conducting terror campaigns among villages. In response, the Navy implemented Operation Market Time and Operation Game Warden, whose mission was to disrupt enemy activities utilizing larger Swift Boats along the coast and smaller, more rapid River Patrol Boats inland. Close air support was critical to success, provided initially by elements of the Army already deployed in the area, but experience early in 1966 demonstrated failing operations. More specifically, “boats were being blown out of the water,” and according to Admiral E. Zumwalt (Chief of Naval Operations), Navy fatalities were outpacing the ability to train replacement sailors; meanwhile, the effectiveness of Seal Team and other Special Ops suffered.

A closer review revealed several principal factors shaping this outcome; competing Army priorities for air support and restrictions that thwarted nighttime and foul weather conditions when enemy operations were at their height (Seal Team and Special Ops as well). Ultimately, it was determined that dedicated Navy resources were necessary to turn the tide, leading officially to the formation of HA(L)-3 on April 1, 1967, and led by CDR Robert Spencer beginning in May. Lacking equipment, human resources, and training, it was further agreed the Navy would take over the existing four Army detachments and what has been described as war-weary UH-1B (Huey) helicopters. Comprised of two helicopters and four-person crews each, the detachments flew from strategically placed LSTs, barges, and limited ground locations across the Mekong Delta. In doing so, the detachments could achieve mobility and proximity to the fight. To bridge the skills gap, Army personnel provided on-the-job training during actual combat missions through September.

From the outset, HA(L)-3 was a different kind of unit, comprised initially of eighty volunteers chosen from across the fleet. Interestingly, the unit’s patch was fashioned after the lion logo featured on Lowenbrau beer cans with the addition of a trident and shield. The squadron routinely conducted search and destroy patrols, reconnaissance, medical evacuation (MEDEVAC), SEAL Team insertion and extraction, but new rules of engagement and close air support tactics were needed to become a truly effective fighting force. A hallmark of the Seawolves were twenty-four-hour operations conducted irrespective of weather conditions, and rapid reaction practices that together with detachment mobility meant the Seawolves were typically engaging the enemy fifteen minutes following a call.

According to LTCDR Bud Barnes, “…the horn would go off, and the 1MC would sound ‘Scramble the Seawolves’, that whole evolution from sound asleep to in the air was less than three minutes”. Similarly, the squadron adopted a tree-top philosophy (typically eighty to one-hundred feet) that both introduced new dangers (for example, ricochets) and personalized the fight, “you can see them, and they can see you.” When on patrol, “if you took fire the gunner would immediately drop a flare (at night) or smoke grenade (in daylight) to mark the target, and the lead helicopter would typically be the first in.” A further innovation enabling crews to continue the fight was a ‘hot turn,’ wherein a helicopter could return to base to rearm, refuel and then reengage without ever shutting down the rotor. According to Larry Rogers (Door Gunner ’69-’70), “We just made-up things as we went along.” Perhaps more to the point, “I felt like we were renegades of the Navy; no one knew how to handle us, and no one knew any more than us, so they just said go do it- and we did.”

However impressive these tactical developments were, squadron performance was equally dependent on helicopter transformation by maintenance and support staff. Reconfigured to enable night missions, the gunship’s offensive capabilities were enhanced to add multiple weapon systems (twin M60, twin.30 Cal MG, automatic grenade launchers, and 6 barreled Miniguns), rapidly change out gun barrels and alternative machine guns while under fire. These innovations were adopted as standard equipment across the fleet once proven under combat conditions in many cases. One Maintainer observed, “They gave us equipment below their standards but not below ours cause we had Maintenance people that were whiz kids.” This creativity was an ongoing necessity as “conditions there were sparse as were materials, necessitating creative ways to accumulate equipment outside the normal supply chain.” “We were the McHale’s Navy of Vietnam; a cross between McHales’s Navy and the Black Sheep (a highly decorated WWII Marine Fighter Squadron).”

The Seawolves’ story is certainly one of courage, teamwork, dedication, and innovation under extreme conditions, but more, a selfless willingness to place themselves in harm’s way on behalf of others. Though combat operations alone will forge a bond among seamen, such esprit décor requires unilateral acceptance of the mission and common, underlying values. Captain Dick Catone observed, “… members took pride in the mission entrusted to them”, while others recalled, “we trusted each other with our lives,” “you’re never going to leave someone behind; if you put them there by God, you’re going to get them out, even if it cost your life.” This commitment to SEAL Team and Special Op extractions, in particular, has cemented relationships that are as strong today as they were over forty years ago. In support of this culture, one Seawolf explained, “There was no Officer-Enlisted separation; the crew and pilots were all one group.” This notion was further borne-out by Captain Robert Spencer (Commanding Officer), “We didn’t function as a group; we functioned as one person, we thought as one person, we fought as one person.”

HA(L)-3 fought with distinction from its inception through decommissioning on March 16, 1972. Once again, the Seawolves secured another first in naval history as the only squadron formed and disestablished overseas. Together with the effects of an unpopular war and personnel who never sought fame, the Seawolves have been uncelebrated for over forty years.  Nonetheless, there is no denying that for one moment in time, volunteers came together as Brothers and not only accomplished their mission with courage and devotion but achieved a level of greatness that will live on long beyond them in the annals of naval aviation history.